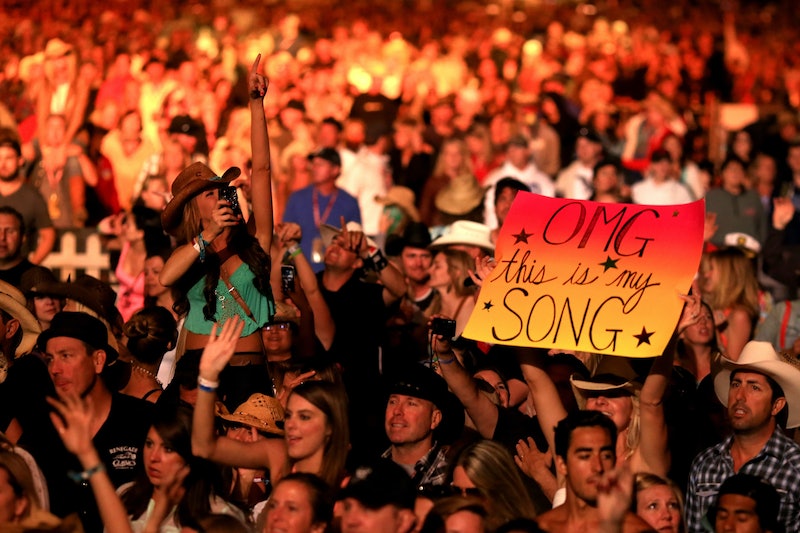 Ever been to a music festival? If you haven't, you're missing out — it's on par with summer Fridays when it comes to naming our favorite part of the season. You know the obvious ones: Coachella, Lollapalooza, and Bonnaroo consistently make headlines, thanks to reunited headliners and holographic performers. The street style pics out of Indio, CA, Chicago, and Manchester alone are enough to make us want to grab our Kanye shades, rent an RV with our nine closest friends, and forgo shirts and showers for a week.

Unfortunately, logistics and super expensive tickets can nix those plans pretty fast, meaning the closest you’ll get to Coachella is streaming it on YouTube. But not to worry — there are tons of more under-the-radar music festivals taking place across the country, all summer long (and more popping up every year).

There are more reasons to make the trek than just the music — most festivals offer a one-stop destination for entertainment, imbibing, and appreciating some truly killer scenic sites. You might recognize some of the names below, while some will be totally new. But chances are, there's one happening near you. Snag a ticket or bookmark this page for next year; you won't want to miss out on these festivals.

You should go if: You like your music with a big dose of nature. There's nothing new about an outdoor concert these days, but Sasquatch kicks things up to the next level by setting up camp at one of the most incredible venues out there — The Gorge Amphitheatre. Stages are set against the jaw-dropping Columbia River gorge, giving every band a killer backdrop. Even when you're not into a performer, you're getting your money's worth.

You should go if: You're nostalgic for the early 2000s (heeey, Death Cab). For those more interested in the present scene, there's plenty of acts with modern indie cred, too. The fact that a city like Boston didn't have a local festival until last year was a bummer, but with an extra day tacked on this summer (and a second festival taking place September 5 - 7), Boston Calling is finally making it up to us.

You should go if: You're ready to dance your face off. The name Neon Desert brings to mind huge electronica fests fueled by laser lights and molly (here's looking at you, Electric Daisy Carnival). In this case, you'd be half right. El Paso's festival brings big dance names and smaller viral acts to small town Texas, without the clubby vibe of some of the bigger electronica gatherings.

You should go if: You love music. Because BottleRock — which launched last year — has every genre covered; from OutKast, who reunited at Coachella in April, to the Barenaked Ladies, and LL Cool J. Plus, Smashmouth. Seriously, there's something for everyone. And if there isn't something for you, there's always wine — BottleRock takes place in the heart of California's wine country.

You should go if: You want to let your inner hippie free. After all, wasn't that the original point of music festivals? There's no place better to get back to nature than way down South, especially at a gorgeous venue carved out of the forest on Mulberry Mountain. The jam bands filling up this year's line-up will provide the ideal soundtrack for chilling out and soaking it all in.

You should go if: You'd prefer Coachella with more city and less desert (although, depending on what the weather, Randall's Island can feel like an arid dust field or a swamp). Governor's Ball draws massive festival mainstays and more-people-should-love-them acts like Janelle Monae and Jason Isbell. Plus, there's endless eye candy in terms of street style — go to see and be seen.

You should go if: You like being ahead of the curve (and Bonnaroo is too far of a drive). Firefly is billed as "The East Coast's Premier Music Experience," and has consistently made good on that promise — despite this being just its third year, it's drawn festival veterans (like Foo) and in-demand A-list acts (see: Imagine Dragons).

You should go if: You loved the idea of Woodstock. This is the first year for The Hudson Project, and they have some pretty big shoes to fill — the festival takes place at Winston Farms, the same locale in the Catskills that once hosted Woodstock '94. Luckily, they seem up to the task, with a well-rounded lineup of indie rockers, dance parties, and eccentric up-and-comers. There's camping, too, so you can get the full Woodstock experience.

You should go if: You love the mountains — and all the other, uh, amenities Colorado has to offer. The Ride serves up straight rock 'n' roll on a hillside at the foot of the Rocky Mountains, making for a truly awesome acoustic experience. The festival pros that make up this year's lineup won't be afraid to use that to their advantage, which will make for some epic sets.

You should go if: You'd prefer a more stripped-down style of music. Since the '50s, Newport Folk Festival has merges the old-school and new-school worlds of folk, and showcased the best in the genre and those influence by the genre, from Bob Dylan (this is where he first went electric) to The Decembrists. Plus, the locale — Fort Adams State Park — is right on the water, so the setting is downright stunning.

You should go if: You live for the oontz-oontz of the world's biggest DJs. In the vein of Ultra and Electric Zoo, the HARD Summer music festival brings some of the most talented electronic and alternative acts to a grassy locale 10 minutes outside of Los Angeles. If you love hipsters and ravers and can handle the aural assault, this is your jam. Just make sure to wear your best furry boots.

You should go if: You're not all about the music. Sure, there are amazing bands lined up for this year's Outside Lands, but there's also Wine Lands (with tons of wine tastings), Beer Lands (same deal), a Taste of the Bay Area (featuring vendors from San Fransisco's delicious food scene), a comedy tent, countless art installations, and more — plus, the festival strives to be eco-friendly, and even offers workshops on the topic. You know, in case you want some education with your music, food, and alcohol.

You should go if: You love emo and punk rock. This year's lineup features hardcore rockers, like NOFX, The Offspring, Dropkick Murphys and Rise Against, alongside the more sensitive dudes in Taking Back Sunday, The National, The Cure, and Motion City Soundtrack. Emo heavyweights Circa Survive and the Get Up Kids will make appearances, too. And, uh, Wu Tang clan? My inner high school music nerd has never been so pumped.

This is your summer.