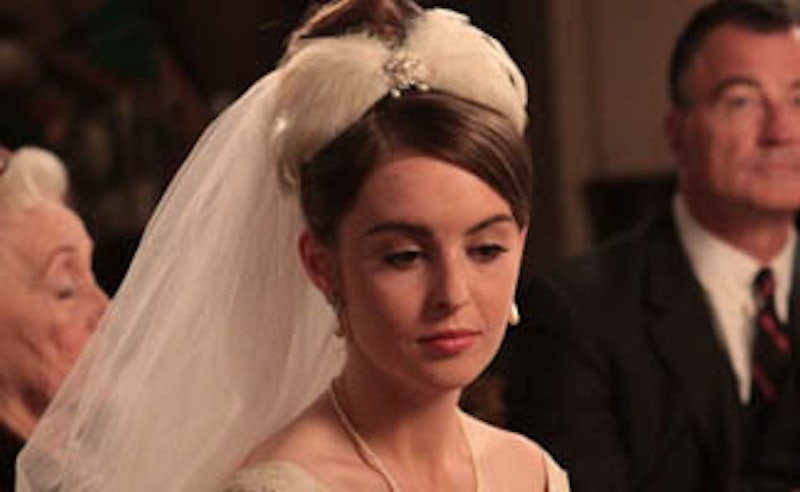 Oh boy, the Megan-Draper-is-Going-to-Die-a-Sharon-Tate-Like-Death-at-the-Hands-of-the-Manson-Family conspiracy theorists must have had a field day with Sunday night's episode of Mad Men , "The Monolith." And with good reason. This wasn't just a minor hint like Peggy holding Folger's coffee, this was as glaringly obvious (too obvious, really) as the very-possibly-doomed Megan moving to the Canyons in Los Angeles. It was revealed in "The Monolith" that Roger Sterling's daughter Margaret (played by Elizabeth Rice) had run away from her husband and son and joined a cult. Yep, that's right. The late 1960's. An impressionable runaway. A "hippie" cult upstate. Of course it's the Manson family, right? Right?! Maybe. Or maybe it's all just a strange coincidence.

Both Margaret's parents thought their daughter had been acting strange as of late — "strange and philosophical," as they put it. While Mona Sterling (Talia Balsam) blamed Roger for her daughter running off into the arms of another man — or many, possibly with many drugs — they both put their differences aside to try and rescue their daughter after her husband had failed to.

After pulling up to a rustic old house turned hippie commune, Mona and Roger, draped in their Manhattan finest, couldn't convince Margaret — now named Marigold and donning hippie threads — to leave. Mona became frustrated and snapped that their daughter "had been brainwashed, but there's nothing to wash." While an angered Mona took off, Roger decided to stay behind and try a different angle. That angle included peeling potatoes, sleeping in a barn, and taking his daughter's side that she seemed "happier" there.

But, the reverse psychology didn't work (damn you brainwashing cults, damn you to hell!) and after a failed attempt to quite literally carry Margaret/Marigold (who spat at her father that her abandoning her son was no different than him choosing his work over his family) out of there, a muddied, deflated Roger walked away from his daughter, possibly forever.

Of course, there's nothing explicit that makes these free-spirited hippies the Mansons, it's harder to ignore all of the red herrings that have lead Margaret — and viewers — to this.

But if this turns out to be a cult, particularly one of the most infamous in American history, and this isn't just Matthew Weiner intentionally messing with the Internet (very possible) you better believe this will spell trouble for Megan. As TV Guide 's Stephen Battaglio put it, quite simply, "Uh-oh":

More like this
Michael & Kathleen Peterson’s House From ‘The Staircase’ Has New Owners
By Kadin Burnett and Kayla Blanton
Penn Badgley & Leighton Meester Met On A Horror Movie Set Before 'Gossip Girl'
By Jake Viswanath
'Atlanta' Season 4 Could Be Here Sooner Than You Think
By Kadin Burnett
50 Years After Creating Her Alter Ego, Angelyne Is Still Driving That Pink Convertible
By Gretchen Smail
Get Even More From Bustle — Sign Up For The Newsletter