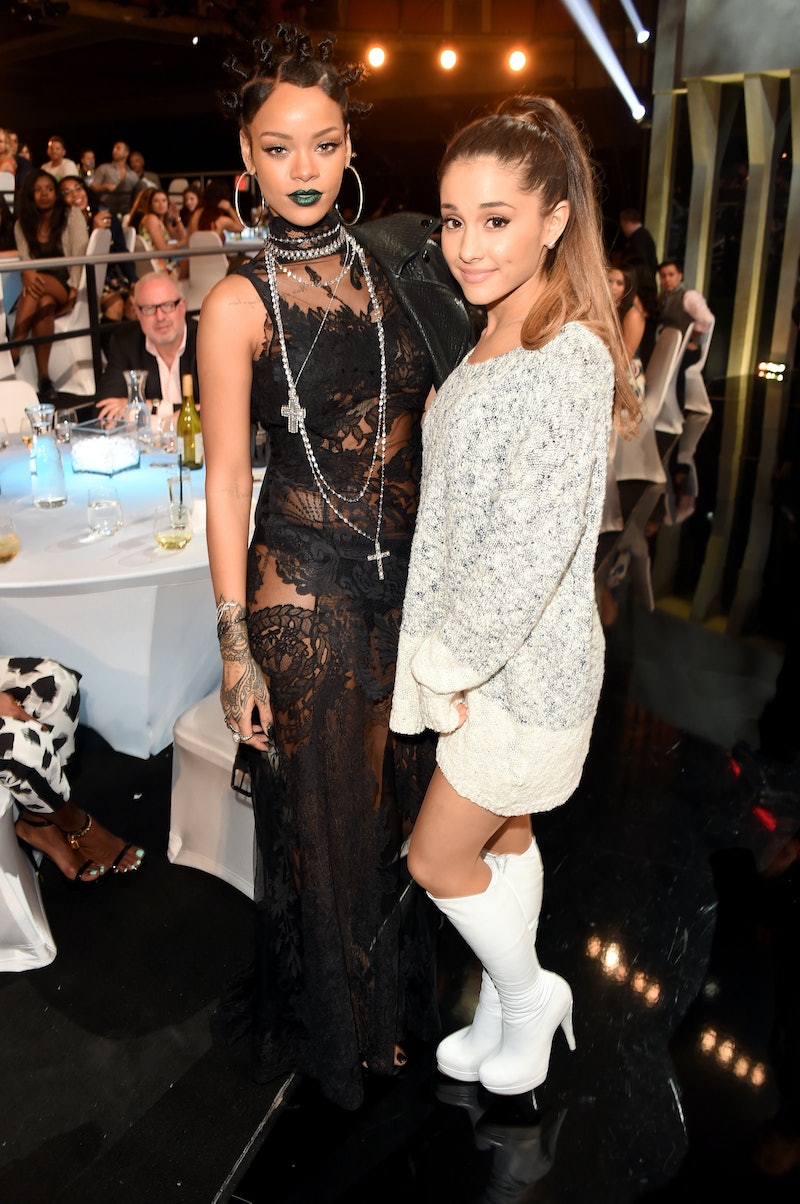 During last Thursday's iHeartRadio Music Awards, the camera caught Rihanna having a chuckle while Ariana Grande performed "Problem." What/who was RiRi laughing at, exactly? Natch, the we put on our detective caps and grabbed our magnifying glasses. We had to crack the case! Was the wine to blame? Was there an inside joke? Did someone pass RiRi a funny note at that very moment? Was it a friendly laugh? Was shade being thrown ? Was RiRi mocking Grande's dance moves? Could a feud be a-brewin' between two of my favorite pop stars?!?! WHAT AM I GOING TO DO?!

Monday morning, Grande appeared on Australian radio program The Bump Show and set the record straight: Rihanna was throwing support, not shade. WHEW. (Who could ever be mean to Grande anyway? Oh, right. I almost forgot about the Perez Hilton ish.) Grande's direct answer diffused the drama bomb. We are to believe (and I definitely believe it) that there isn't any ill will whatsoever between the singers. No feud to be had, only good vibes.

The notes I jotted down while listening to Grande’s response: 1) Rihanna is nice, 2) Grande is chill, 3) I hope they collaborate (fun note: RiRi laughed during Britney Spears's performance of "Gimme More" at the 2007 VMAs, and a few years later, they teamed up for "S&M"), 4) I hope they become BFFs, and 5) I hope to be their third BFF.

"I didn’t see her laughing at me, but when I watched it afterwards it looked like she was just shocked because I was doing something different."

"But afterwards she was so kind to me, she was like, ‘Lil' mama keep doing what you're doing because it's working.’"

"And so I thought it was funny that people tried to make such a commotion out of it when she was just being playful and supportive if anything, so I don't know."

"People are always trying to make a big deal out of nothing because they're bored."

Stand down, fellow Arianators and fellow members of the RihannaNavy (yes, I belong to both). Happy to report there's no pop war to be found here.