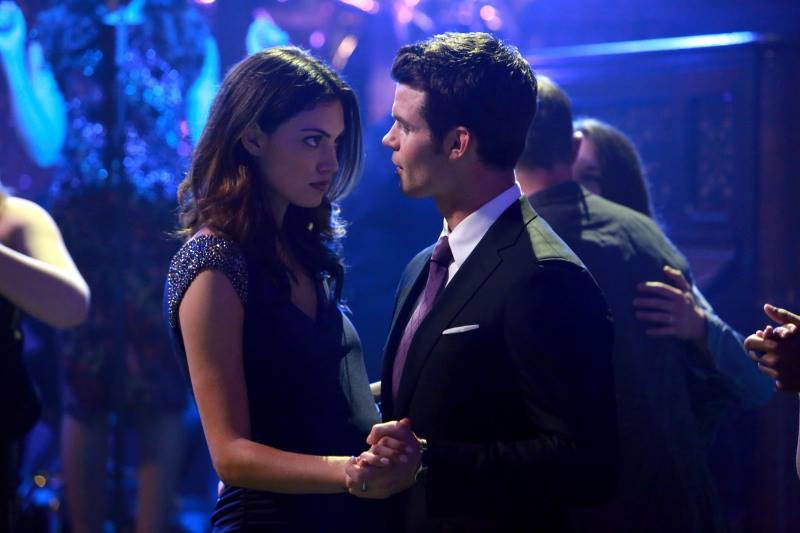 You're probably not a fan of this Originals 'ship (I totally am so get over it) — but they're going there so you'd better get used to it. The CW vampire drama's first season was all about the will-they-won't-they chemistry between Klaus' hybrid baby momma, Hayley, and his well-dressed, only-surviving brother Elijah. On last week's episode, "A Closer Walk With Thee," the show finally went there and "Haylijah" finally kissed. So, cue the discussion as to whether or not it's cool for them to get together.

I know what you're going to say: How could Hayley and Elijah do this? She's having Klaus' baby for crying out loud. And yes, that would be kind of terrible if Klaus and Hayley ever had any sort of romantic relationship. (Hint: They haven't. Ever.) Unfortunately, last week's episode of The Originals put us in an uncomfortable place by making Klaus finally come around to the idea of having a child and being a father. And Julie Plec — because she never wants us to 'ship without feeling guilty — made Klaus and Hayley share an emotional moment of understanding about shitty parents and the damage they can do. (We're looking at you Mikael, you jerk.) But even so, Klaus and Hayley were never mean to be more than a one-night stand even if it did result in the world's first hybrid baby (he did tell the witches to kill Hayley and the baby when he found out she was pregnant).

So now that we've moved on from that point — sorry, everyone who thinks Hayley is a big jerk for not trying to work things out with Klaus. (Also — HELLO, PEOPLE, HE'S SUPPOSED TO BE WITH CAROLINE AND NO ONE ELSE.) Let's get to talking about Hayley and Elijah because those two actually do have a shot at making it work and I can only hope, after disappointing me on the Klaroline front, that The Originals' writers will do the right thing here.

Hayley and Elijah basically had a love-at-first-sight moment at the beginning of the series. And how could we argue with love-at-first-sight? We can't. So there's that. But more so than just the fact that they can gaze longingly into one another's eyes, Hayley and Elijah make a great team. Elijah vowed to protect her from day one and as fiercely as he's tried to keep Hayley out of danger, she's done the same for him. You know, with beating the crap out of Celeste and all and saving him by letting him drink her blood and him saving her from literally burning to death from the inside out. Though Hayley's pretty much down with protecting anyone who deserves it, it's their mutual desire to take care of one another that works for them.

But at the same time and Elijah protects her from the crazy shit that's going down — he respects her. Unlike Klaus, who tries to tell Hayley what to do and the werewolves that just let her do whatever she wants, Elijah works with Hayley. She challenges him and vice versa to make the right decisions, which is really the team you want to be on if you're trying to get control over an unruly city of supernatural creatures. Hayley's tough enough to be an equal and Elijah treats her as such — that type of respect is huge.

And don't even get me started on the chemistry and how epic that kiss was during last Tuesday's episode. Hayley and Elijah have been shunning their feelings because of Klaus and Hayley's obligations to the wolves and all of the chaos in the Quarter, but the chemistry was always there. In their arguments about peace, about whether or not Hayley was safe in the Bayou, and on who they should trust — all chemistry all the time. And it's a relief to watch because Cami and Klaus/Marcel is so awkward that it's almost painful.

So, why do we need to get on board with the Haylijah 'ship? Because it just works — and where Klaus is on his constant quest for power, Hayley and Elijah are in the perfect place to become New Orleans' royal couple. Which I've said a hundred times before because I'm really emotionally invested in their success, but it also just makes the most sense. Everything about Hayley and Elijah together from the chemistry to their fierce desire to take care of one another to the fact that they actually make a great team and he acknowledges Hayley's strengths makes them the perfect couple for The Originals to break their non-romance formula for.

It had to happen eventually — we're just happy it's not a Elijah-Hayley-Klaus triangle in the mold of The Vampire Diaries. I'm so sick of those.