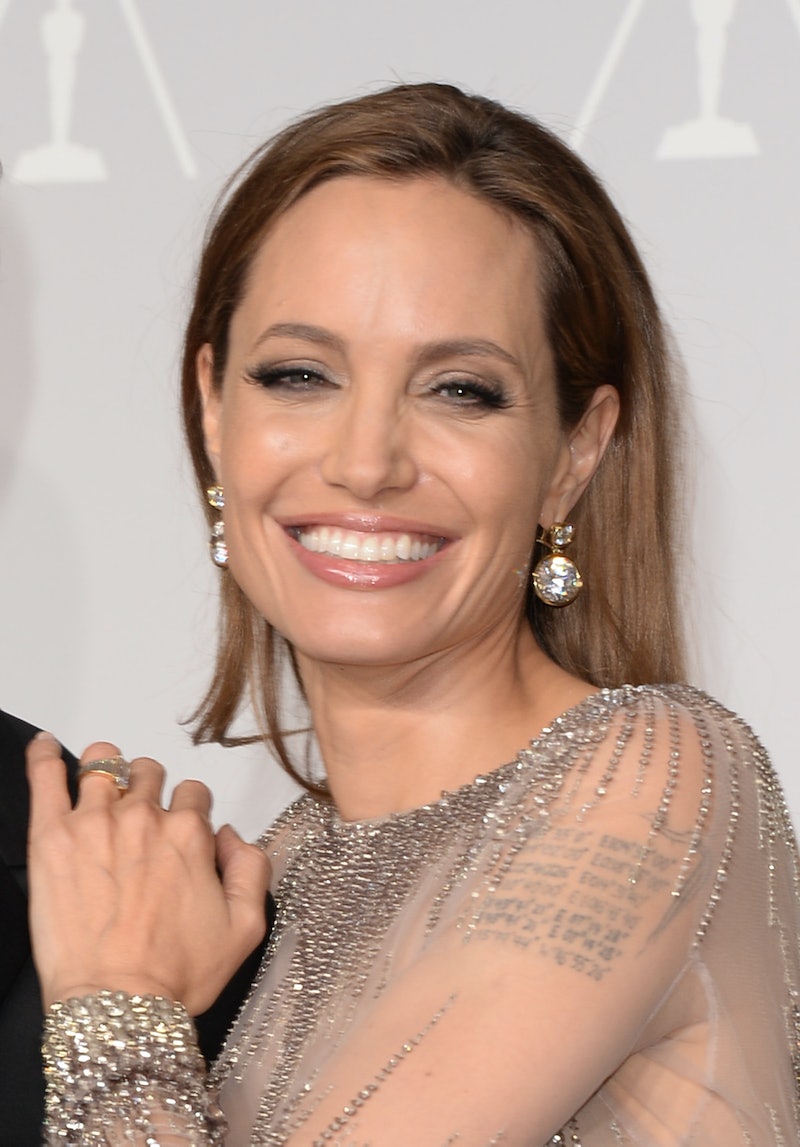 For one of Hollywood's most private celebrities, Angelina Jolie has been surprisingly vocal lately in talking about her personal life. Back in March, the Maleficent star gave a long, revealing interview to Entertainment Weekly, in which she spoke of everything from her double mastectomy to her feelings about 50 Shades of Grey. Promoting the film this past month, Jolie spoke candidly about working with her kids and getting cast in Maleficent. Now, the actress has chosen to open up to another major magazine, spilling details about her family, career, and much more; on the June cover of Elle , Jolie discusses her life with Pitt, planning their wedding, and her abiding fear of "a life half-lived."

It's the latter subject that actually proves the most interesting, and it also contains the best advice. Discussing her twenties, a time in which the public saw her as rebellious and wild, Jolie reveals the real reason for her antics.

"It wasn’t a need to be destructive or rebellious—it’s that need to find a full voice, to push open the walls around you," she says. "You want to be free. And as you start to feel that you are being corralled into a certain life, you kind of push against it. It may come out very strange, it may be interpreted wrong, but you’re trying to find out who you are.”

Jolie continues: “I realized that very young—that a life where you don’t live to your full potential, or you don’t experiment, or you’re afraid, or you hesitate, or there are things you know you should do but you just don’t get around to them, is a life that I’d be miserable living."

The only way to find satisfaction, she adds, was to "be true to myself, whatever that may be, and that tends to come with stepping out of something that’s maybe safe or traditional.”

Jolie's comments are fascinating, and especially relevant when "wild" stars like Miley Cyrus are forced to reassure fans that they're just coming into their own, rather than destroying their lives. Jolie's actions back in the '90s and early '00s may have been seen as rebellious or dangerous, and not without reason; "healthy" people typically aren't seen wearing vials of their partner's blood around their neck. Still, we shouldn't be so quick to assume that because a young woman, especially one who grew up with fame, is exploring her boundaries, she's ruining her life or having a mental breakdown. As Jolie said, being "corralled into a certain life" can be suffocating, and it's reasonable that a person who was raised in the spotlight would eventually feel a need to break free of those constraints.

And clearly, taking her own advice has had an enormous impact on Jolie. She made it out of her twenties with an Oscar, years of humanitarian work, and a relationship with the man who would become her fiance and the father of her children. Today, her Goodwill ambassadorship and impressive resume far overshadow the "wildness" of her youth, and her willingness to step outside her comfort zone, whether with film or humanitarian travels, is hugely impressive. She's a leader and a feminist, whose actions — revealing her mastectomy, fighting for human rights — have inspired millions of women around the globe. And, according to Jolie, it's all because she had the sense to explore her identity all those years ago.

The entire interview isn't available to read online, but the excerpts that have been released are equally intriguing. Jolie talks about how she and Pitt drive each other "beautifully crazy," how she never thought she'd have children, and how the couple is "still thinking about" getting married. Those details are fun to read, of course, but it's the actress' comments about her past that have us admiring her the most. Jolie has her critics, but with self-aware, important statements like this, she's earning our respect more and more each day.

More like this
What Is Brad Pitt’s Net Worth? The Bullet Train Star Now Makes 8 Figures Per Film
By Hugh McIntyre
Brad Pitt’s Recent Dating History Includes A German Model
By Brad Witter
Florence Pugh Won’t Discuss Harry Styles Sex Scenes In 'Don’t Worry Darling'
By Grace Wehniainen
Twitter Is At Odds Over Taylor Swift’s Possible ‘All Too Well’ Oscar Run
By Brad Witter
Get Even More From Bustle — Sign Up For The Newsletter