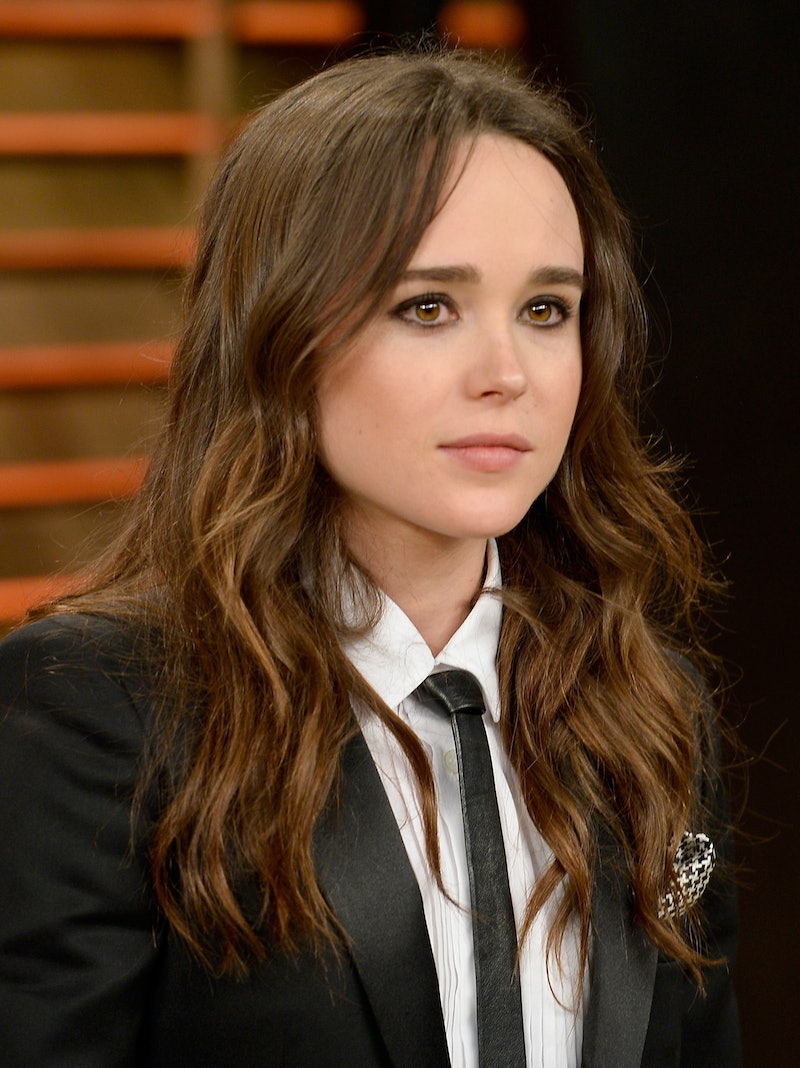 Ellen Page has been on a roll lately, between that incredible coming out speech, her emotional appearance on Ellen , and her recent discovery of a very impressive talent of re-naming Twitter users' dogs. Now, the X-Men: Days of Future Past star is appearing on the cover of The Hollywood Reporter, giving a powerful, eye-opening interview about her sexuality and the effects keeping it secret has had on her career, relationships, and self-esteem. The entire piece is absolutely worth reading, but it's Page's statements on Hollywood's sexualization of women that are particularly remarkable.

"In a lot of the roles, especially now that I'm getting older, women are devices for the men in the story and very sexualized," she says. "That's what it's all about -- being seen through this male, patriarchal gaze. Let's just get real; that's just what most scripts are."

Instead of lamenting this injustice, though, Page is taking action. As the article states, the actress is set on creating her own projects, films that are feminist, important, and unlike any of Hollywood's typical fare. One of which, Into the Forest, is a book adaptation about two sisters (Page and Evan Rachel Wood) who are forced to fend for themselves in post-apocalyptic California. Another, Freeheld, is described as a "lesbian civil rights movie" that stars Julianne Moore as a cop dying of cancer who fights for her right to transfer her pension benefits to her domestic partner, played by Page. The film, which Page is also producing, has taken almost six years to get made, but it wasn't until recently that it gained enough momentum to finally turn into a reality.

Both projects are intriguing, but Freeheld, especially, could make huge strides for the on-screen depiction of women and members of the LGBTQ community. Based on a true story, the movie is written by Ron Nyswaner, an Oscar nominee for his screenplay for Philadelphia, another groundbreaking film revolving around gay rights. With Page and Moore as the leads ("Julianne is so f---ing badass," Page said of her co-star's willingness to play a lesbian for the third time, after Chloe and The Kids Are All Right), Freeheld has a strong chance of breaking out from the indie world into mainstream success.

And even if it doesn't, the fact that it will exist at all is astonishing. Movies about LGBTQ people so rarely get made, and the ones that do practically never talk about issues as serious as Freeheld's subject matter. No matter how it does at the box office, the movie will certainly make a difference in a whole lot of people's lives, thanks in large part to Page's unwavering support.

In championing these roles, the actress is forging a path for herself that's unlike any other star's. Not content with the parts that exist (or, perhaps, tired of having phobic studios refuse to cast her in more "traditional" female roles), Page is creating her own career, one that's likely more fulfilling than any Hollywood could offer. It's inspiring, and an example to other actors who might feel that they don't fit into any of the industry's assigned boxes, or that they simply don't want to.

And, as an added bonus, taking on these smaller roles won't cause Page to fall into obscurity, a fate that, while unfair, is typical of an indie actor. In addition to Into the Forest and Freeheld, Page is reprising her X-Men role, possibly playing John Belushi's wife in an upcoming biopic, and readying to star in her own action vehicle, an espionage thriller currently in development with Fox. If anything, Page's mainstream films will bring more attention to her smaller projects, giving the indie films greater audiences than they would otherwise have seen.

Notably, none of those films look like they'll feature Page in an overly "sexualized" role, or rely on a "male, patriarchal gaze," like she acknowledged is common in Hollywood. Rather, they'll allow her to play characters that aren't defined by their gender or sexuality; even the Belushi biopic is being produced by the late actor's widow, Judith Jacklin, whom Page is playing, so it's likely her role will have more substance than the average "wife of" movie part.

And to think that this is all happening so soon after Page came out is extraordinary. Her success doesn't mean there's no backlash, of course — she is "aware that she's not up for romantic leads," as the interview states — but it does mean that it's possible for an actor to choose his/her own path, despite whatever expectations the people around them, and the industry, might have. By saying no to roles she hates and creating the ones that don't exist, Page is setting a powerful example for all those who might one day follow her lead, and those already out there too afraid to do the same.