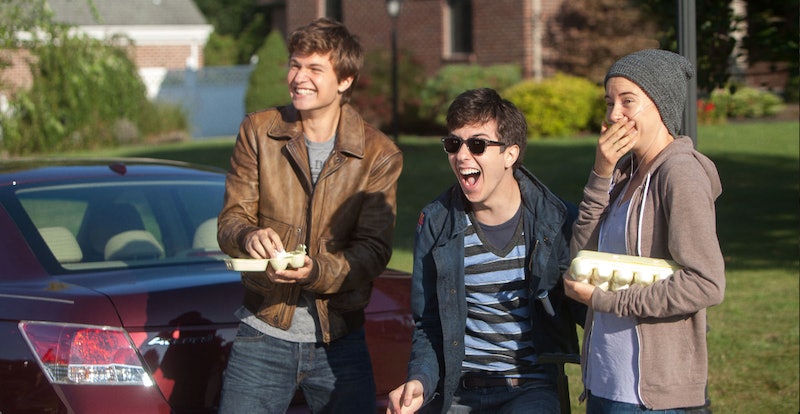 At this point, the film adaptation of John Green's The Fault in Our Stars might be the highest anticipated film of 2014. The extended trailer for TFiOS was officially released just last week and apparently it's already broken a YouTube record. And that really doesn't surprise me. Considering we're desperately clinging to every bit of behind the scenes footage of stars Shailene Woodley and Ansel Elgort being adorable, Green's bromance with Nat Wolff, and every sneak peek we can get — like the Wednesday-released first music video for the film for Grouplove's "Let Me In." According to reports, TFiOS trailer is the most liked trailer in Youtube history.

As of right now, the TFiOS trailer has over 17 million views on YouTube, but it's the video's 272,457 (and counting) likes on the site that are something to speak of. Because, as of Wednesday, it's officially become the "most liked" trailer ever. Prior to this, the reigning "most liked" trailer was for the One Direction concert movie One Direction: This Is Us. So the gist of this is that John Green's "Nerdfighters" have officially surpassed "Directioners" as the Internet's most influential fandom. Earlier today, Bustle published a post about how TFiOS ' fandom is just as important and Hazel and Gus and their story and I completely agree.

The sheer volume of "likes" on the film's extended trailer makes two things perfectly clear: that these fans that fell in love with Hazel and Gus' story are engaging just as deeply in the book's film adaptation and that we all really love a good cry. If these ever-increasing numbers are any indication, TFiOS is a shoe-in to bring in huge money at the box office.

If you haven't seen the trailer yet, or if you have and you just can't help yourself (like me) here it is so you can check those numbers yourself: