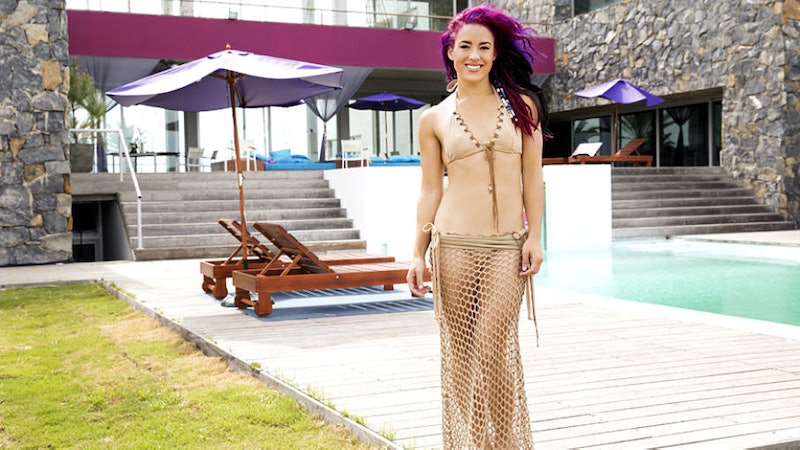 Despite making it to three — three — out of six finales of MTV's 25-season deep The Challenge: Free Agents, Cara Maria, the self-described "weird" and magenta-headed, continues to be underestimated by most of her Free Agents opponents.

After going to the Draw in the first two episodes, Cara Maria faced Nia in an Elimination battle, which essentially came down to weight distribution and stamina. Considering the half foot and change Nia has on Cara Maria, everyone assumed Nia would easily win. Instead, the battle went on for a full, excruciating hour before Cara Maria, suddenly incensed by Johnny Bananas' insults, managed to drag herself to the bell and win (and even managed to get a "Shut up, Bananas!" in there).

Last week, Cara Maria went to Elimination again and beat Latoya, who had already proven herself a pretty brutal opponent when she took down Jemmye in Episode 1.

Her performance this season aside, let's think about the fact that this was Cara Maria's 12th Elimination round. Can you imagine going through 12 of those battles? No wonder she managed to beat out a couple of scrappers like Nia and Latoya. Clearly, this girl is the sleeper this season.

Let's break this down a bit. Before Free Agents, Cara Maria appeared on six seasons of The Challenge and made it to the finale in three of them. She dominated six out of 10 elimination rounds and she (or her team) also won seven out of the 36 non-finale challenges in which she participated.

Given her success rate and overall experience, it's hard to say why many of the others don't seem to see Cara Maria as a big threat. She herself has an idea, though: In her show bio on MTV.com she says, "I know physically I can do anything, but mentally I second-guess myself. It’s almost like I’m afraid to win."

This kind of self-consciousness is often palatable, and most likely something her Free Agents castmates pick up on (particularly Bananas, with whom Cara Maria has a long-standing history of hate).

It's a Guy Thing

Former Challenge star Tyler Duckworth, meanwhile, thinks Cara Maria's tendency to put men before herself has been her downfall.

Her friend, ally (temporarily, from the look of a new promo), and former Challenge partner Laurel knows better, though, and says it best: "She's someone to be feared," said Laurel after Cara Maria's win. "She is one of the top girl competitors."

With four episodes down and seven to go, can Cara Maria boost up her confidence enough to make it to the finale once again? More importantly, now that she's won two Eliminations in a row, will her opponents finally realize she might actually be a threat?