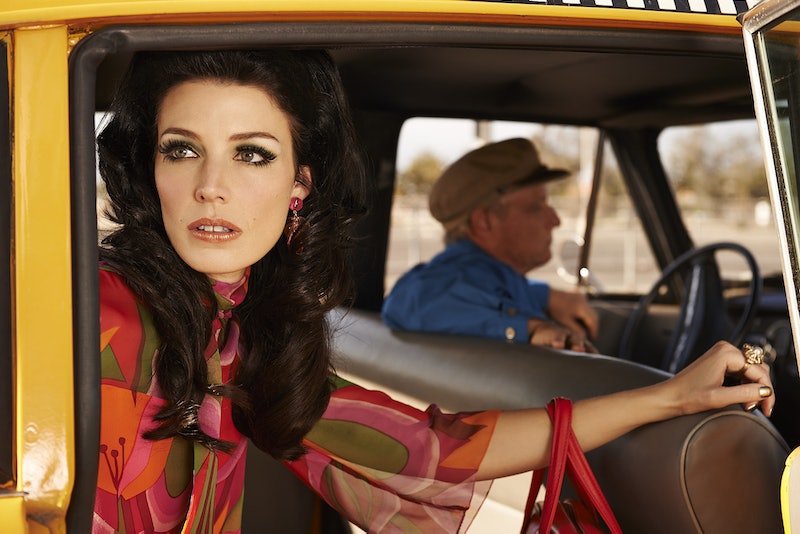 My brain hurts. I've been thinking nonstop about this whole Megan-Draper-is-Sharon-Tate- Mad-Men theory, and my mind is mush. The good news is that I think I've finally come to a conclusion about what showrunner Matthew Weiner is doing: He's not going to kill Megan.* Why? Because he likes messing with us way too much. He's playing a game of cat and mouse, and I have a whiskey-strong feeling that he's not willing to give us the satisfaction of winning.

The show is his baby, so why would he even toy with the possibility of letting the media or the audience take that away from him? Well, he wouldn't. That's why the Margaret-turned-Marigold cult from "The Monolith" episode is one big old-fashioned slap in our face. We've all been talking about how Megan is a stand-in for Sharon Tate ever since she wore that red-star shirt in "The Better Half" almost an entire year ago, so including this cult could be Weiner proving just how far he's willing to go. Weiner's been listening to everything we say with a glass pressed against the door, and he's using our theories against us.

Not only is he paying attention to everything the media (and Reddit) is theorizing, but it seems he truly cares about it. Well, he cares enough to drop blatant Easter eggs in a handful of episodes. Now, you might be thinking, "Wait, what if he's double trolling us and he's actually going to kill Megan?" — because I've definitely (and recently) thought that at one point — but the thing is, he's done stuff like this before. It's not just Sharon Tate references that he's dropped in the plot lines, so we know he has a pension for breaking the fourth wall. Check out some of the other times Weiner has been a little devious:

In an episode of 30 Rock, the gullible character Cooter Burger (Matthew Broderick) had an "Old Spanish": a fictional and disgusting concoction made up of red wine, tonic water, and olives. Then in an episode of Mad Men, Ted ordered an Old Spanish at a bar. You sly, sly dog, Weiner. (30 Rock writer Tracey Wigfield caught the reference.)

2. That time Mad Men made a dig at the Second Avenue subway.

The show made fun of New York's continually failed efforts to build the Second Avenue subway, a train that has been in the works since 1968 and still isn't a reality.

3. The reference to Pirate Radio.

Because Weiner is so meticulous, we just know that The Turtles' song "Elenore" playing while Don is driving Sally back to boarding school is no coincidence. The connection is that in Pirate Radio, January Jones' character's entrance song is "Elenore."

*If he does end up killing Megan, then the jokes on him because, on some level, he will have officially admitted that the Sharon Tate theories have some truth to them. I guess we'll just have to wait and see.