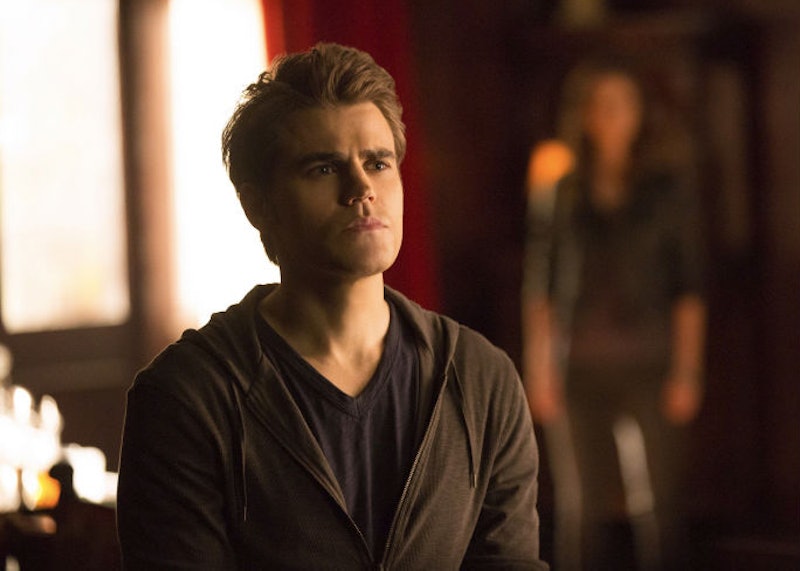 We've known for months now that someone very dear to our hearts would die during Season 5 of The Vampire Diaries — in fact we knew that three someones would die. However, producers failed to mention that the person biting the dust (or withering away into a dusty corpse, as it were) would be one of the three main characters. If we're to believe the connections some fans have made, one of three characters who die this season on The Vampire Diaries is Stefan Salvatore. Update: We now know Stefan's sad fate.

Look, we're not one to throw a theory like this around lightly, but when superfans are finding undeniable evidence, it pays to listen. Much of the panic (who wouldn't panic when the life of your favorite character is in jeopardy) comes from the logline for May 15's Season 5 finale, which is missing a significant measure of Stefan-related plot.

Heartbroken by an unexpected tragedy, Damon (Ian Somerhalder) is focused on holding himself together, while pushing Bonnie (Kat Graham) harder than ever to find a way to stop the disintegration of the Other Side. Elena (Nina Dobrev) takes matters into her own hands and demands that Liv (guest star Penelope Mithcell) and Luke (guest star Chris Broshu) help her, but Liv refuses to cooperate until Caroline (Candice Accola) provides her with some personal motivation. Sheriff Forbes (guest star Marguerite MacIntyre) is horrified when Markos (guest star Raffi Barsoumian) uses violence against Tyler/Julian (Michael Trevino) to prove that Mystic Falls is now under the control of the Travelers. With new information from Sheriff Forbes, Damon comes up with a dangerous plan that relies on split-second timing from Jeremy (Steven R. McQueen) and Matt (Zach Roerig). Liv’s off-hand remark regarding Stefan (Paul Wesley) gets a surprisingly emotional response from Caroline. As conditions on the Other Side worsen, Bonnie takes the opportunity to settle an old score. Finally, Damon’s plan causes a massive explosion in Mystic Falls, and everyone is caught up in the confusion, leaving a trail of heroism, sacrifice, relief and despair.

Nowhere in that paragraph do we have mention of what Stefan — one of the original trio on The Vampire Diaries and one very important third of the central love triangle. We do get a little mention about Caroline taking offense to an off-hand remark about Stefan, which likely has to do with Caroline's obnoxiously budding crush on Stefan, but her anger could be increased by the next piece of the puzzle.

The logline states that Damon will be reeling from "an unexpected tragedy." How many tragedies could truly rile Damon so much, that he'd be mentioned before any of the other characters? Well, Elena could die or disappear, but that doesn't seem to be on the table. The other option is that the only other person Damon truly cares about — his brother Stefan — is in some sort of danger. And considering the way those three deaths were teased, signs are pointing resolutely at the lighter-haired Salvatore.

And the evidence doesn't stop there. This week, the logline for Thursday's episode concludes with the final line "Caroline is witness to an unthinkable act of violence by one of the Travelers." The writers clearly showed that Caroline has some level of feelings for Stefan last week — wouldn't it make sense that they shore up that connection just in time for whatever "unthinkable act" goes down this week? Even if the Caroline connection is a stretch, it seems unlikely that Stefan will come out of Thursday's episode unscathed.

Plus, we're not the only ones who made these connections.

Of course, some shrewd fans made the excellent point that TVD loves to throw a temporary death fake out into the plot, oh, just about every three episodes.

So while we hope we're wrong, we can at least take solace in the fact that once upon a time Elena "died" during a huge episode and she's certainly still kicking. Hell, Bonnie and Jeremy are practically experts at dying and they're definitely still on the CW payroll. And even if TVD doesn't give us a solution before the final minutes of the TVD Season 5 finale, just remember that Stefan was in a box in the river in the final moments of Season 4's finale and he certainly managed to find his way out. It will all be okay... at least until another villain rears his or her head in Season 6.

More like this
Mike Flanagan Teases 'The Midnight Club' In This Exclusive, Creepy Clip
By Grace Wehniainen
Glenda Cleveland Died 2 Decades After Trying To Turn In Neighbor Jeffery Dahmer
By Brad Witter
'The Rings Of Power' Episode 6 May Reveal Sauron’s Identity
By Grace Wehniainen
Caleb McLaughlin Details Racism From 'Stranger Things' Fans
By Radhika Menon
Get Even More From Bustle — Sign Up For The Newsletter