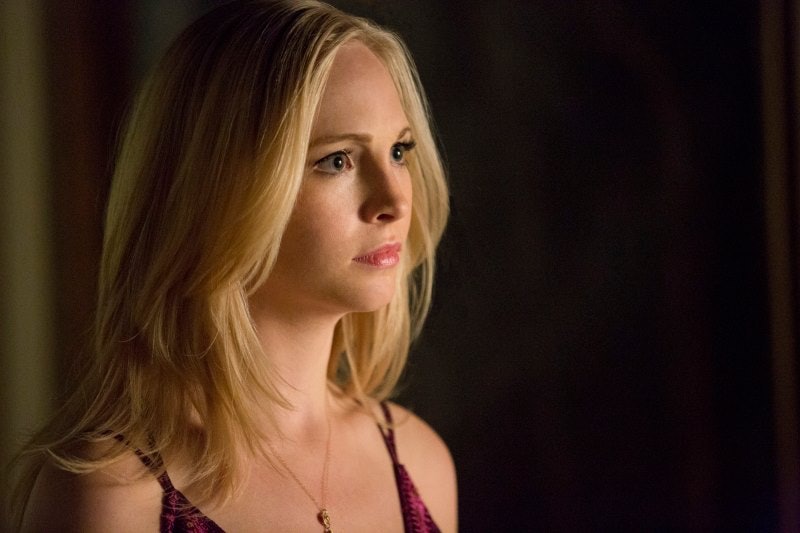 Remember way back when The Vampire Diaries premiered five seasons ago and Caroline Forbes was just the stereotypical blonde BFF to Nina Dobrev's whining Elena Gilbert? Caroline was a cheerleader, she was clueless, she was beyond shallow, she was selfish, and it was totally fine because she was filling in that high school trope. But since then, TVD has developed Caroline into a character that we actually don't mind having around and by that I mean we actually really liked her a lot — up until last week's Vampire Diaries episode where they, and TVD fans who 'shipped Steroline, more or less destroyed her.

Caroline started out as the flattest of flat characters on this series and more or less the only person more annoying than Elena. She had an odd and borderline criminal relationship with Damon Salvatore when he first arrived in Mystic Falls, where he basically just fed on her and compelled her into liking him. And somehow (somehow goes by the name of Katherine Pierce) ended up being turned into a vampire at the end of Season 1. Thus beginning the transformation into the Caroline we know and love today.

Post-transformation, Caroline became a powerful and useful ally in the dramatic saga of Elena and the Salvatore brothers. She grew up and developed into a less self-centered human being (she's still a little self-centered, but it's not the worst anymore) and became a fan-favorite as well as the better half of Klaroline, one of the series' most popular 'ships. And, up until recently, she'd developed a great friendship with Stefan Salvatore, which lent the unique dynamic of an actual functional and supportive friendship to TVD.

But, unfortunately, because this is TVD and because some fans seem to think that everything should be wrapped up in a tidy, little bow relationship-wise, Stefan and Caroline became Steroline. And for a while, it didn't mean anything. Sure, the fans wanted them to get together because they had "great chemistry" (or they just had a normal friendship?) but this isn't Glee — Julie Plec doesn't just do what the fans want. (Otherwise Caroline would've left for New Orleans awhile ago.) But last week, that all changed when TVD's writers had Caroline take three GIANT steps backwards.

Apparently, Steroline was happening this entire time — well, at least in Caroline's mind it was. On Thursday night's episode of TVD Caroline was made out to be jealous of Stefan and Elena's new pseudo-friendship. And it was the worst possible thing Plec could've done to this character that's grown so much. Caroline whipped out a vindictive "Never Have I Ever" about Elena kissing a Salvatore brother today that just made her look pathetic. And she tried to stir up trouble in an attempt to find out what they were up to. It was just total high school-level drama that Caroline hasn't exhibited for at least two seasons.

And that's just really uncool. Caroline's developed into such an important and well-rounded character on this series and by making her get jealous of Elena and Stefan, the show's writers negated all of that progress. Sure, Caroline is still a little insecure, but we saw her own her independence when she did the dirty with Klaus and was so not sorry about it when Tyler tried to judge her. And we'd really wanted to believe that she'd be allowed to have that friendship with Stefan without it falling into the standard TVD melodrama. And, seriously, girl-drama, Caroline? Don't you guys have enough problems without turning on each other over stupid boys that have done nothing but ruin your lives?

Basically, Caroline deserved so much better than to be made out as pathetic and desperate — and she definitely deserves a lot more than Elena's sloppy seconds. She's become this strong and admirable character that, even though she spews her moral two cents a little too often, fans actually like. But now that we know TVD has no respect for her character development — does that mean Caroline can finally go to The Originals ? Please?