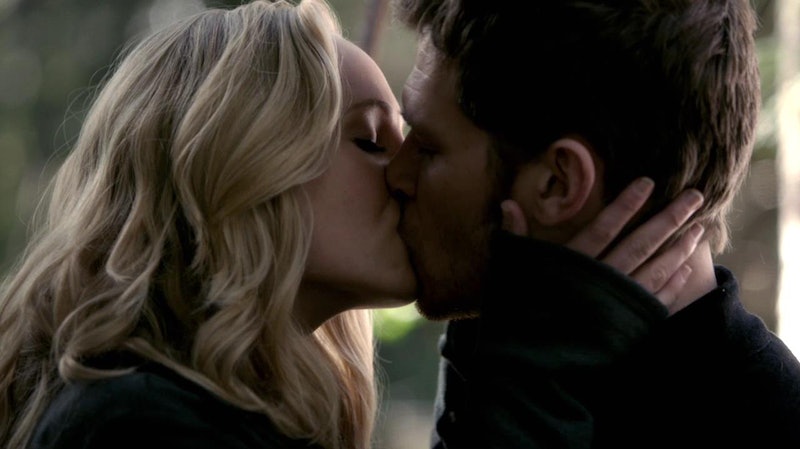 We're coming to the end of the first season of The CW's The Originals and the fifth season of its parent series The Vampire Diaries and one fact remains: fans want Caroline Forbes and Klaus Mikaelson together for good. Heck, I want Caroline and Klaus together. And if there were ever a time for a TVD Caroline crossover to The Originals, it's right now. Between virtually destroying Caroline's character on last Thursday's TVD and finally letting the Hayley-Elijah kiss happen on last Tuesday's The Originals, both series gave perfect reasons why Caroline's path should start heading towards New Orleans.

So why now? These characters don't necessarily need one another to further their storylines, nor do they need a relationship to make them more likable. It's more so the fact that they both deserve a little bit better than what they've been given on their respective current seasons — especially Caroline — that makes this the right time to revisit their relationship.

Back when Plec had Klaus return for TVD 's 100th episode, she rationalized their "final moment" by saying that there really wasn't a way to make it work right at that point because of the spin-off series. And fans were pissed because Klaroline seemed like such a sure thing — almost as certain as Elena ending up with a Salvatore brother. But now that the TVD has brought in The Other Side again and connected the two series by having Klaus call Bonnie during last Tuesday's Originals, why can't they entertain a crossover? Now that The Originals has completed its first season and proven itself, there's definitely more room to play around with the possibility of a crossover arc for Caroline to join our favorite hybrid (HA — take that, Tyler) in the Big Easy.

Aside from the success of The Originals first season and that the series has a full-season's worth of character development under its belt now, the fact remains that Caroline is the only character that Klaus has ever had any chemistry with. (I refuse to acknowledge Genevieve because she is almost as terrible as Tyler. And don't even start with Cami.) And, on top of that, she's the only character that he's ever shown a true, romantic interest in. (I also refuse to acknowledge Hayley because that wasn't romantic.) Klaus went out of his way to reveal his vulnerabilities to Mystic Falls' resident blonde and to proclaim his love for her. That's not standard, run-of-the-mill behavior from Klaus. At all.

And on that same side, Caroline went out of her way to bend her strong morals to accommodate him. Most of the time, even though no one else wants to hear it, Caroline's commentary comes from a strong moral center. But when it came to getting close to Klaus and ultimately getting it on with Klaus, Caroline let loose for once from her stringent expectations of others. Now, I'm not saying that there's anything wrong with Caroline's high standards — but I am saying that it's time she follows her heart instead of being stuck in her head in Mystic Falls where no one actually appreciates her.

The feeble attempts at getting Klaus and Caroline to engage in meaningful relationships with other characters — I'm looking at you Steroline 'shippers — only furthers the argument that they're meant to be together. And right now, considering Genevieve's deception and the fact that Stefan is so not the right guy for Caroline, both series are more or less pushing these two together. At every turn it seems like they get nowhere with their attempts at intimacy with others and it's just feeding the flames of fans that are anxiously awaiting their reunion.

Klaus was never going to find someone in New Orleans — mostly because he's damaged, but he also burns every bridge before he even gets into a relationship or some semblance of one. To be quite honest, the fact that The Originals didn't set Klaus up with a love interest was something I really liked about the series. (I still do, but the right time is the right time.) As for Caroline — Tyler was always a waste of time and so were her college boys. And no one actually believed that she was going to get together with Stefan, right? So it's really just a natural progression for her character to move on and build her own story. And I'm not just saying that because Hayley and Elijah finally got together — that pair really has nothing to do with Klaus' romantic situation.

Right now, these two need to feel what it's like — in Caroline's words — to be someone's first choice. Klaus' life in the Quarter has been full of deceit and Caroline's just been treated like a trusty sidekick. If not for any other reason, it's time for Klaroline to happen because these two characters need each other to pull themselves back together and become active participants in their stories again. Because individually and together, Klaroline is worth so much more than it's been given so far.