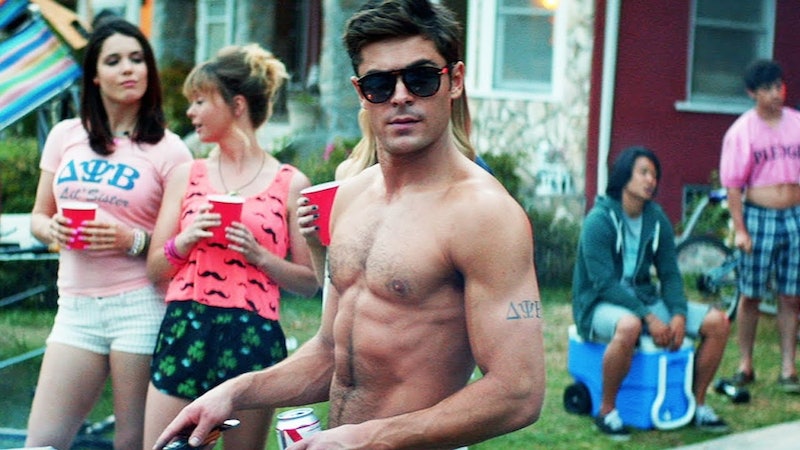 So, there are reasons as to speculate why this movie is kicking ass at the box office. Surely you've seen the trailer and know that it's a raunchy, laugh-fest — and surely you know that The Most Beautiful Man On Earth stars in it — but there's definitely more to it. Here are some — and mind you, these are just a few — reasons that this movie is doing so well.

That's right, it's laugh out loud funny. I haven't laughed this hard since I saw This Is The End. You know when you do that thing when you tell people that a movie is freaking hilarious? You know, in like — a conversation? When you say something like, "saw the funniest movie this weekend. Go see it?" Funny movies do well. Period. Also, consider this my personal endorsement for the movie. It's damn funny.

There's Been An Amazing Press Tour

The press tour for this film has been nothing short of amazing (see above for Seth Rogen and Zac Efron in Jimmy Fallon's "Ew!" sketch.) It's also been eye opening, and Rogen and Efron have been a joy to watch in interviews. Zac Efron's candidness about testicles has also been quite welcome and entertaining —as well as rather informative. In fact, when I was watching the movie, I became the Trivia Tidbit Queen. I leaned into my boyfriend during Dave Franco and Zac Efron's fight scene and whispered, "Did you know that Zac Efron broke his hand doing this? Dave Franco has BALLS OF STEEL. Also, he plays this game called sack tapping —"

And speaking of which (brace yourself for some very chiseled abs)...

Zac Efron is Back

And better than ever. He's been speaking with candor about recovering from addiction, and despite his downfall in the recent past, seems to be bouncing back excellently. His appearances have been strictly related to publicity, and he seems to be focusing on his career. Plus, let's talk about how anyone who had a distaste for him from his High School Musical days will easilly say that he's grown up to become a likable actor who isn't afraid to make fun of himself.

James Franco's brother is on point in this movie, and he will likely (and hopefully!) see an uptick the roles he gets offered after this. He has some of the best lines in the movie, and his character offers a fundamental foil to Efron's vacuous party boy: this guy is smart and sees life beyond the frat. But he and Efron have one of the best bromances since I Love You, Man. In fact, their riff on "bros before hoes" challenges The 40-Year-Old-Virgin's "you know how I know your gay?"

Someone give this hilarious actress her own movie to star in. This lady is the real star of this movie! The Bridesmaids actress is a key foul-mouthed player in the raunchy and virile games in the movie. And she does it so. Damn. Well. What's more is that she's a lady in what may appear to be a guy's movie, but the director and screenwriters let her play on the same page as the dudes, without subverting her to the naggy wife role. ("We're both Kevin James!" she cries out to Seth Rogen at one point.)

This Adorable Baby Gets Dressed Up As Famous TV Characters