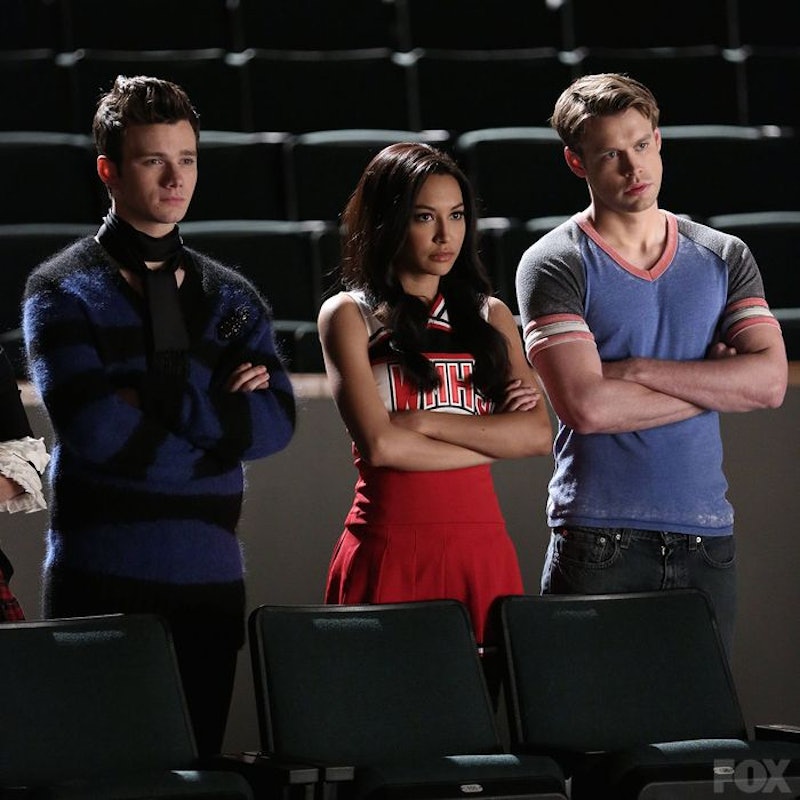 If you haven't heard by now, then brace yourself. After Tuesday's season finale, Glee will not be returning for the Fall 2014 season. In fact, there won't be a new episode of Glee until 2015. Season six of Glee is going to be the end of the series, so they've got more than enough reason to want to get it exactly right. However, asking fans to wait until midseason for their season premiere is like asking a bear to wait until sundown to eat the fish it just caught. I'm sure if they could, several Glee fans would tear through FOX with the first episode of season six clutched in their huge jaws en route to the nearest flatscreen TV.

Season six is going to take place after a time jump in a new location following a huge event that's due to happen in the season five finale. However, there's been no word from FOX or from Ryan Murphy about how exactly we're all supposed to cope during the real life time between seasons five and six. Life and television are two different things. We can't just jump ahead to 2015 and not just because of all the great television we'd miss by doing so. If the thought of going seven months without Glee is giving you a bigger anxiety attack than Elsa in most of Frozen, here are some suggestions on how to prepare yourself during the hiatus.

No one can blame you for being lonely without Rachel Berry's ego to keep you company. If your house starts feeling a little too empty on Tuesdays, adopt a dog like the main cast urged everyone to do in "Old Dog, New Tricks". Just make sure that you can actually take care of it before you bring it home. We don't want another tearful Sam Evans-esque goodbye.

Ryan Murphy's Funny Girl might still be on the horizon, but there are loads of other Broadway shows to take in. If you don't live anywhere near Broadway, then Fox is bringing Grease Live to screens in 2015 and NBC is bringing Peter Pan Live in 2014 following the success of The Sound of Music Live.

3. Keep Up With the Actors

Believe it or not, the Glee actors do have lives outside the show. Lea Michele released an album, Chris Colfer is an accomplished writer, Darren Criss was in a movie and on Broadway, and so on and so forth. If you can't see their characters on the television screen, you can at least get your fix supporting their other endeavors.

The season five finale will be the 108th episode of Glee. There are approximately 210 weeks separating you from the season six premiere. Watching the entire series again, episode by episode, once a week will still leave you with some time leftover before the premiere, but at least the hiatus will seem much shorter.

If you can't stomach the idea of rewatching the series knowing you won't be any closer to finding out what happens after the season five finale, then it might be time to quit Glee all together. Put yourself in a Glee allergy bubble. Turn off the TV. Go outside. Pretend Glee isn't a thing until it comes back. That will teach it a lesson.

Can you draw? Start sketching the characters in your notebooks and on your napkins. Are you a good video editor? Time to start making music videos and uploading them to YouTube. Can you write? Time to try a little thing called fanfiction to fill in those blanks yourself. Just because the show is gone doesn't mean the fandom stops existing.

7. Get Addicted to Something Else

That seems like a tall order with practically everything going on hiatus following their season finales in the next couple of weeks, but if you've ever considered getting Netflix so you can get into some new TV shows then now is that time. Maybe the reason Glee was able to hurt you like this is because it's the only show you're watching. Besides, think of how much you'll miss it when it finally does come back.