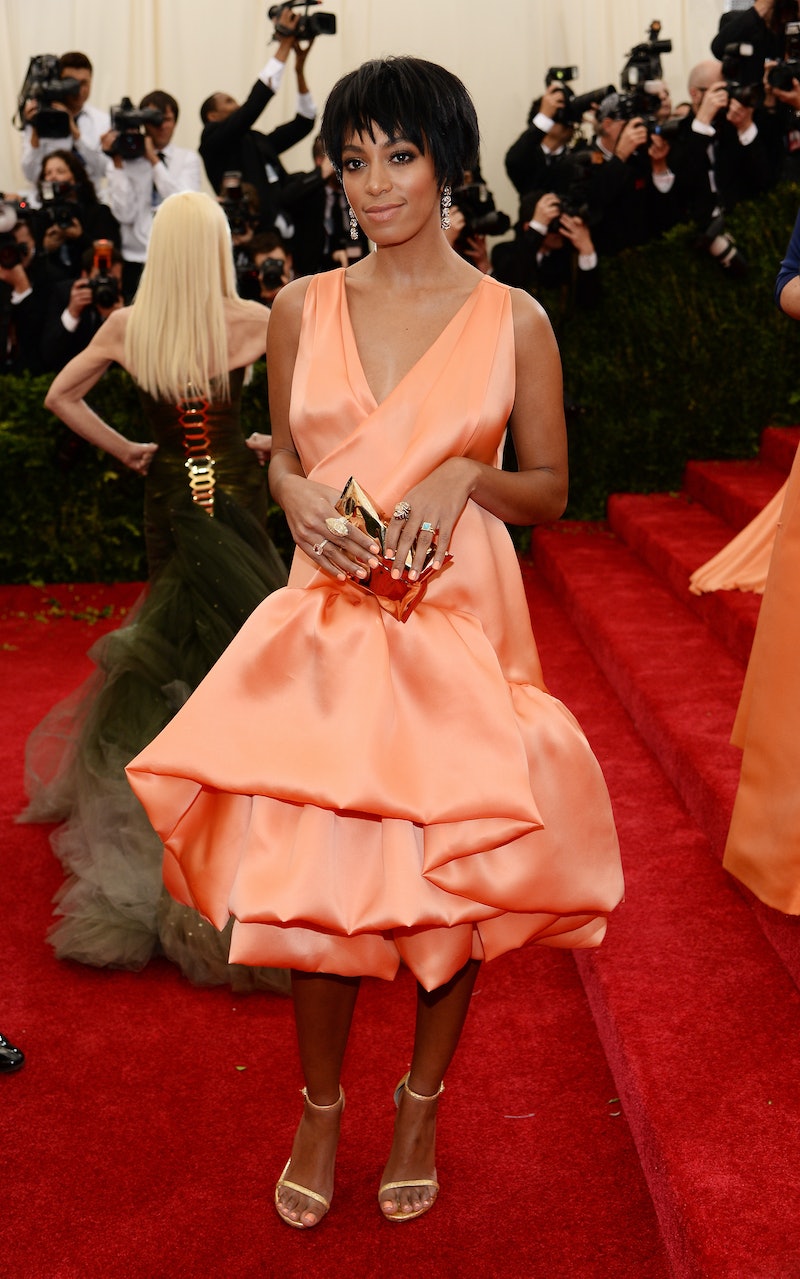 It's only day two of Elevator-Gate (just tossing around ideas for names here) and a new development has broken: Solange has deleted all but ONE photo of sister Beyoncé from her Instagram account, the lone survivor is a throwback pic. The Instagram photo deletion comes only a day after footage from the Standard Hotel leaked on Monday, showing Solange attacking Jay Z in the elevator after the Met Gala after party on May 5. Beyoncé was present, but did not intervene.

Questions abound. Theories are whispered, emailed, and tweeted. There's already a hashtag—#WhatJayzSaidToSolange — that makes us question how we talk about domestic violence. But this news that Solange has deleted all evidence of her sister Beyonce makes us physically incapable of NOT speculating. We don't know what Jay Z said to Solange in that elevator, but we do have some possible theories about why Solange blitzed her Instagram of evidence. And to make matters... worse? weirder? Beyoncé posted a prayer to her Instagram account days after the Elevator Incident, that was ambiguous at the time but now seems more ominous and just, well, strange.

Our theories on why Solange deleted all those great Knowles sisters photos.

1. Solange is genuinely upset with Beyonce.

There's a great post over at Jezebel about the extremely complicated relationships between sisters and the men they marry. When the footage first leaked, the first questions that arose were "What did Jay do to provoke his wife's sister" and, secondarily, "Why wasn't Beyonce intervening?" The Knowles family is so private that there's no way in hell to actually know what the dynamics are between Beyoncé, Solange, and Jay Z, but there could be definite bad blood between Solange and Bey that caused Solange to erase the evidence from her Instagram account of her sister. It must be extremely difficult to try to maintain family relationships and private, inter-personal problems without them leaking into the press as it is, but imagine if you're as high-profile of sisters as Bey and Solange. Maybe Beyonce committed some sort of ill against her sister. It's all very Shakespearean and very, very secret.

The deletion could be a very deft and strategic move; maybe Solange just doesn't want the public and media outlets to have unlimited access to so many photos of her with her sister, scrutinizing their body language and putting together timelines of when their relationship went sour. We can't blame Solange for taking down the photos that are her private property in such a stressful time. You do you, Solange! Although I am sad, because who doesn't want to stare at photos of the impeccably-dressed Knowles sisters in happier times?

They could honestly make anyone do anything. We still want to believe that all members of the Knowles-Carter family stand together in this struggle, but if they could be a part of the Illuminati, I'm sure they could pressure their lil sis to remove photographic evidence from social media.

It seems like he's got the inside scoop on what was really up in that elevator.

5. It's none of our damn business.

Whatever happened at the Met Gala or in the personal lives of Beyoncé and Solange is (as much as we wish it was) none of our biz. We got a glimpse into a troubling scene between two very public and revered ladies — we love Bey and we love Solange, and they are both powerful artists right now, but at the end of the day, they are sisters and part of a family, and we should give them some human decency and respect. I'm sure they will eventually handle all this in the press, but for now, let's let them live (and attend basketball games).

Here's the last vestige from Solange's Instagram that features Bey: