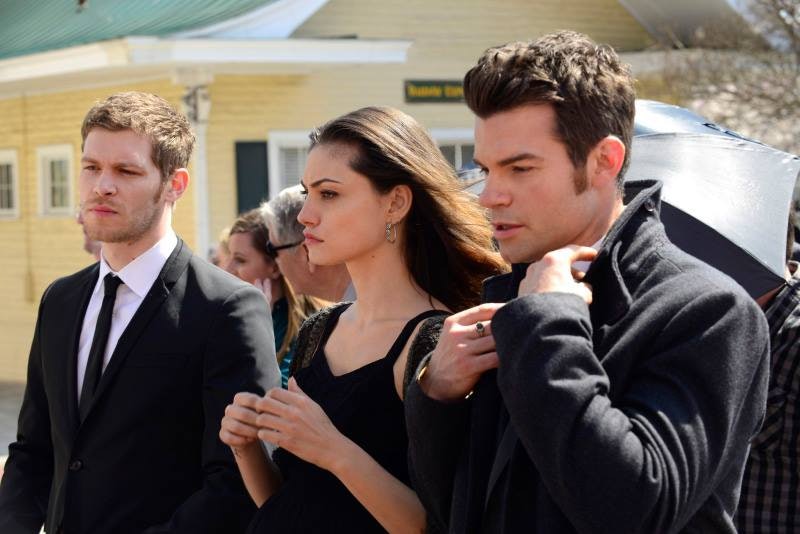 Alright, people, it's time to get down to the real business with Tuesday night's Season 1 finale of The Originals. Because we can only obsess over the fate of Klaus and Hayley's hybrid baby for so long, right? (Because she's totally going to be fine.) The big questions for the series' first finale is which character is going to die and whether or not it will be Hayley, Elijah, or Klaus? And after shifting through Joseph Morgan's finale semi-spoilers, I've got your answer — not one member of our beloved trio is going to die.

I know, with the current state of chaos on The Other Side, no death will be permanent on The Originals, or The Vampire Diaries for that matter. But even so, for a series that killed off a regular character before the midseason break (they did bring her back later, but still) we know that anyone and everyone is fair game. And that includes the two remaining Original vampires and this werewolf baby momma — or does it?

In a recent interview with Zap2It, Joseph Morgan — more often known as Klaus Mikaelson — teased the Originals finale's big death and how the past two weeks of the show have led up to this moment. And we're pretty much convinced that fans of these three series regulars have nothing to worry about. Morgan said of the finale:

Here's the thing: If any of these three characters sacrifice themselves for the hybrid baby or the cause, their approval ratings will skyrocket. For Klaus, it would be a true test of his shred of humanity and it'd be indicative that he's capable of change. For Hayley, it'd just prove that she's a compassionate being and will eventually (when she's back to life) be a great mother. And for Elijah, it'll just prove the fact that he's one of the greatest beings on this show — even though he's killed at least 80 people so far this season.

And, overall, sacrificing themselves for this baby would be way too predictable to appeal to showrunner Julie Plec. So we might as well just rule that out right now.

For Morgan's semi-spoiler to come to fruition, someone will need to make an extremely unpopular kill — like, apocalypse-level unpopular. And why don't we think that it's Klaus taking out Hayley or Elijah or any combination of that scenario? I mean, if any of these three died by one of the other's hand, it'd be a pretty big deal. Well, recently released stills from Tuesday night's "From a Cradle to a Grave" show Klaus having an emotional conversation with Cami that seems to leave her distressed. We don't know if their conversation has anything to do with the rumored death, but it seems more than likely that it does. Klaus is in a tough spot and he's going to have to do something drastic — cue Cami coming with her unwelcome moral compass to try to stop him.

But these photos mean that Klaus absolutely isn't killing his brother or baby momma. Cami's not emotionally invested in Hayley or Elijah at all, so that rules them out from dying by Klaus' hand. I mean, Cami and Hayley are kind of friends since they have a relationship with these vampires in common and have each other's phone numbers. But that's pretty much it. And, while we're dissecting Cami's facial expressions in these photos, it seems important to bring to light that Cami really isn't emotionally invested in Klaus' survival either. She actually thinks Klaus is kind of the worst — and the finale's synopsis says straight-up that she's teaming up with Davina to take him down. Oh, and she's all about #TeamMarcel.

The pieces of the spoiler puzzle just don't add up to a death of any of these three characters — actually, they point further and further towards Klaus putting an end to his surrogate son, Marcel. Which is really sad, but sometimes we have to hurt the people we love. (Well, it's more like always when we're talking about Klaus.) At least the hybrid baby will not only survive this war, but end up with three parents — lucky her!

More like this
The 'This Is Us' Finale Featured An Adorable Season 1 Jack & Rebecca Easter Egg
By Grace Wehniainen
The Grey's Anatomy Season 18 Finale Finally Revealed If Japril Got Back Together
By Brad Witter
'Obi-Wan Kenobi' Takes Place After This Key Star Wars Movie
By Arya Roshanian
'Gentleman Jack’s Cast & Crew Are Keen On Season 3, Too
By Frances Stewart
Get Even More From Bustle — Sign Up For The Newsletter