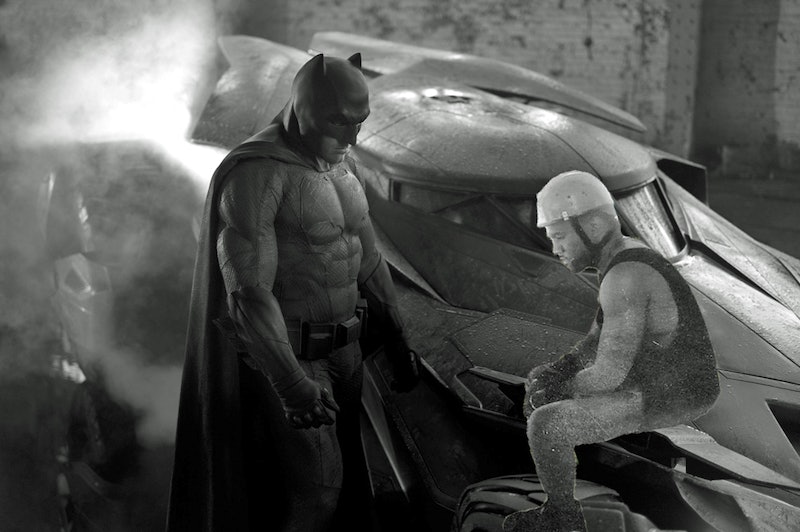 Isn't the Internet just the greatest place? On Tuesday, fans and doubters got their first glimpse of Ben Affleck as Batman. And on Wednesday, Batfleck became everyone's new favorite meme — #SadBatman. Even if you don't believe that Affleck can step into and adequately fill the recently vacated shoes of the Caped Crusader, you're going to just love #SadBatman. Because, like #SadKayne before him, he will become a vital tool in expressing yourself on the Internet. Or just to provide you with some serious laughs to cure the Hump Day blues.

God, Photoshop is a wonderful thing. I'm sorry, I'm always so eternally grateful for a well-constructed meme. But anyway, the original first image of Batfleck showed the actor, in his suit, chilling with his Batmobile. And it's actually a pretty great photo — well, except for the fact that Batman looks so sad that its inspired a spreading-like-wildfire joke about him. (Not in the "I'm not wearing hockey pants" kind of way either.) Ranging from people wondering why Batman is so sad to the new meme that features Batman in various sadness-inducing scenes.

But the big question here is who's sadder — Sad Batman or Sad Kanye?

Sadness In The Bathroom

Who's Sadder: Batman — just looking in the mirror makes him sad. Kanye's just sad because he knows how many germs there are in the urinal — he brought that on himself.

Batman eavesdropping on this sad Up scene:

Vs. Kanye about to lose a Quidditch game:

Who's Sadder: Kanye because Harry Potter's totally about to whoop his ass and catch that Golden Snitch. Batman's just sad because he knows he's doing something wrong by eavesdropping on a private, family moment.

Vs. Kanye in this Jeep:

Who's Sadder: A draw. Batman's sad that his suit is never going to dry after this and Kanye's feeling guilty about greenhouse gasses.

Who's Sadder: Obviously Batman because it appears Sad Keanu is bullying him and stole his lunch. Kanye's just commiserating with him. Or maybe Sad Keanu is the saddest of all, because Batman and Kanye stole his schtick?