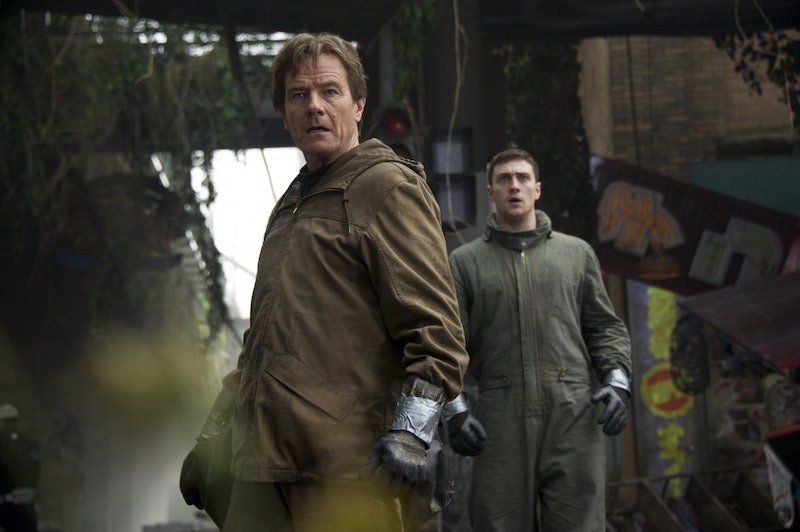 The long-awaited re-imagining of Godzilla (a proper Godzilla movie, that is, to erase the memory of the epic 1998 misfire starring Matthew Broderick) hits theaters this weekend and moviegoers can't wait to feast their eyes on one of pop culture's most famous monsters. And, Godzilla, too. Sure, the latest incarnation of the terrifying gigantic lizard can still destroy cities and send its citizens fleeing in fear, but this movie also stars Bryan Cranston, the very man who played one of the scariest figures of all-time: Walter White.

The Breaking Bad star plays a good guy in Godzilla, but it's hard not to imagine what it would be like Heisenberg went up against a monster even more unpredictable and unruly than, well, Walter White. Better yet, who would you be more scared of: Godzilla or Heisenberg? Both have frightening reigns of terror, both leave a lot of destruction in their path, and both have achieved icon status despite being someone/thing you'd never want to actually encounter. In honor of the new Godzilla and it's other leading man Bryan Cranston, we dissect the evildoings of these two very different monsters. (Man what we wouldn't give to hear Badger and Skinny Pete's thoughts on this.)

Winner: Heisenberg. Any monster can roar, but a Heisenberg threat will turn your blood to ice.

Godzilla: Most famously, Japan, but over the years Godzilla's path of destruction has gone global. In fact, in the new movie the creature obliterates a few locations, including San Francisco.

Heisenberg: Walter White cause plenty of death and chaos in Albuquerque (including causing a domino effect that resulted in the crash of Flight 515), but who knows how many overdoses or acts of violence he caused in the entire southwest where his meth reigned supreme. (His product even went overseas, which caused it's own heap of shit.)

Winner: Godzilla, not only for the range of destruction, but for the fact that it's been at it for decades. That's a lot of cities that need rebuilding.

Winner: Heisenberg. The only people scarier than Walter White were most of the people trying to bring him down.

Ability to Come Back From the Dead

Godzilla: Considering this is roughly the 723rd Godzilla movie, there's a good chance this won't be our last encounter with the radioactive monster.

Heisenberg: Walter White died what he loved doing, but he still definitely died.

Most Likely To Give You Nightmares

Godzilla: As a kid, Godzilla probably made you lose a lot of sleep.

Heisenberg: As an adult, Heisenberg probably made you lose a lot of sleep.

Winner: It's a tie! Both of these monsters instilled fear that will last a lifetime. And hey, if you ever see either of them you better take off as fast as Jesse did.