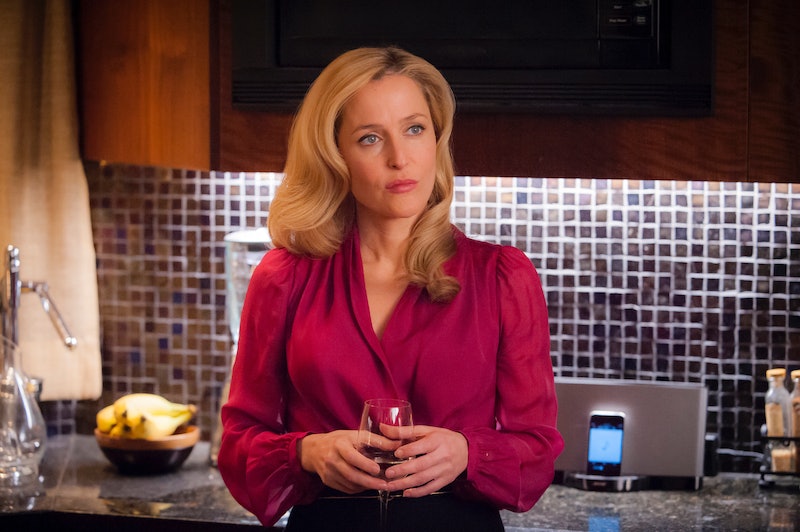 With just four more episodes left of Season 2 of NBC's brilliant thriller Hannibal , one of the biggest questions on Fannibals' minds — apart, of course, from whether or not there will be a Season 3 — is if we can expect more Gillian Anderson on Hannibal .

X-Files vet Anderson played Hannibal's therapist, Bedelia Du Maurier, in Seasons 1 and 2 and quickly became a fan favorite. Maurier abruptly left early in the season after she started to realize exactly what Hannibal was (and Anderson had to start filming Crisis), but Anderson told IGN in March, "Hopefully, I'll be able to whip out a couple of more Hannibal 's."

Showrunner Bryan Fuller seems to want Anderson back too, telling IGN he hopes "to get her back for the second half of the season, depending on her schedule."

There's more than just sheer desire for Anderson to return as Dr. Maurier; there's a need for it. Sure, she's not technically a loose end — the way in which she left didn't logistically leave anything to be desired — but she knows about Hannibal. As one of few people to successfully escape Hannibal's crosshairs, Maurier is too important a character to leave in the past.

There's even an opening for Maurier's comeback — in last Friday's episode "Shiizakana," Will tells Hannibal that Maurier came to see him and say "I believe you", and asks outright if he killed Maurier. Hannibal says no, but not before the slightest of very pointed hesitations.

So under what circumstances might Maurier reappear? We have a few theories.

Theory #1: Maurier Will Return and Out Hannibal as the Chesapeake Ripper

We've mentioned this theory before, and if Maurier is indeed not only the one to officially out Hannibal as the Chesapeake Ripper, but does it by the end of Season 2, it means she'll have to stay alive long enough to set in motion the flashback that kicked off the season.

Theory #2: Maurier Will Return and Be Murdered By Hannibal Before She Can Tell Anyone Her Secret

Even if logistics-wise Maurier isn't a loose end, Hannibal considers her one. Had she been home when he went to visit her after she confronted him in "Sakizuki," he absolutely would have killed her. He's put off tracking her down, but now that he knows that Maurier didn't just scamper off like a rabbit, knowing what she knows, but actively defied him... let's just say it doesn't bode well for the good doctor.

...Or maybe Hanibal hasn't put off tracking her down. Just because we haven't seen Hannibal find and murder Maurier doesn't mean he hasn't done so. It's entirely possible that we'll see flashback shots of Hannibal killing Maurier interspliced with shots of him serving her for dinner (or something like that).

Not to mention that Fuller also told IGN that three beloved Hannibal characters would bite the dust before Season 2 ends — we have one left to go (unless of course one was just a red herring). Could it be our beloved Maurier, or will she back for (the yet-to-be-announced) Season 3?