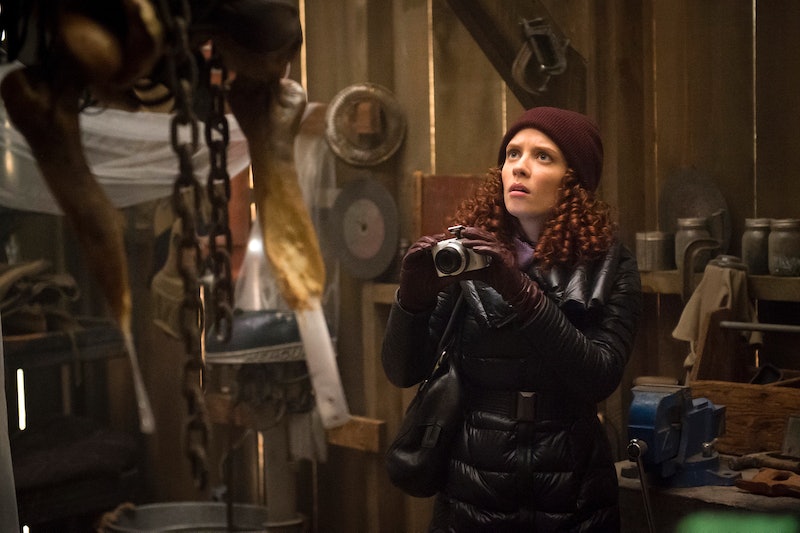 Between Will sleeping with Margot Verger and finally embracing his dark side (or not), it seemed like things on NBC's Hannibal couldn't get any more out of control. Then, after Hannibal reporter Freddie Lounds went snooping around Will's barn and came across man-beast Randall Tier's lower jaw, Will murdered Freddie and brought a slab of her body over to Hannibal's for dinner.

Or did he? The character does die in the book Red Dragon, but we never actually see Will end Freddie's life (though, in all fairness, we don't really see most of the Hannibal victims' deaths until after their bodies are found).

Still, it seems unlikely that Will would actually just up and become a serial killer. From the moment he realized Hannibal was a killer and had framed him for countless murders, Will's goal was revenge and justice. He wanted a reckoning, and his new facade is how he'll get it.

It's like Freddie tells Alana: "If you can't beat Hannibal Lecter, join him" — except Will is merely pretending to join Hannibal. Will knows by now he can't catch Hannibal on his own; the doctor is too clever and dangerous for that. The only way to Will can close enough to expose Hannibal for the monster he is to trick him into thinking he isn't trying to do exactly that.

Still not convinced? Here are a few more reasons why Freddie's not dead:

Will Murdered Randall Tier Out of Self-Defense

It's true that Will murdered a man. Tier, however, tried to murder him first, thereby rendering it an act of self-defense. Was it excessive? Perhaps. Will totally lost it on Tier, and once he started imagining Hannibal on the floor, bloodied and helpless, all bets were off. He may have said he'd "never felt more alive" than when he was killing Tier, but that sounds like trickery.

...But only because when she found Tier's animal-skeleton-suit and jawbone she (understandably) lost her shit and tried to run away. If she had managed to leave and tell someone what she found in the barn, Will, void of proof of Hannibal's involvement, would have gone straight back to jail. Will, who was clearly trying to explain what was going on, had to stop Freddie by any means necessary (short of killing her, of course, because that would totally defeat the point).

The "Long Pig" Will Brought to Hannibal Was Randall Tier

Freddie is undoubtedly stashed away somewhere for her own safety, annoyed that she doesn't have a cell phone, but what Hannibal and Will ate was definitely human. What else was Will going to do with all that Tier-meat he had saved in the freezer?

In the promo (below), Will hands Alana a gun and tells her to "practice." Practice for what, exactly? For defending herself against Hannibal, that's what.

And defend herself is just what she does. In the very first trailer released for Season 2 of Hannibal, a terrified Alana is seen pointing (presumably) the same gun at Hannibal.

Is there a chance Freddie really is dead? Of course. In the "Ko No Mono" preview we also see a flaming body in a wheelchair racing down the street, which is how the character died in the novel and the film version.

Then again, in the books, Dr. Chilton certainly wasn't shot by one of Jack Crawford's protégés and Beverly Katz wasn't sliced up like a science project. The books are an untrustworthy source — not that anything on Hannibal is ever really what it seems.