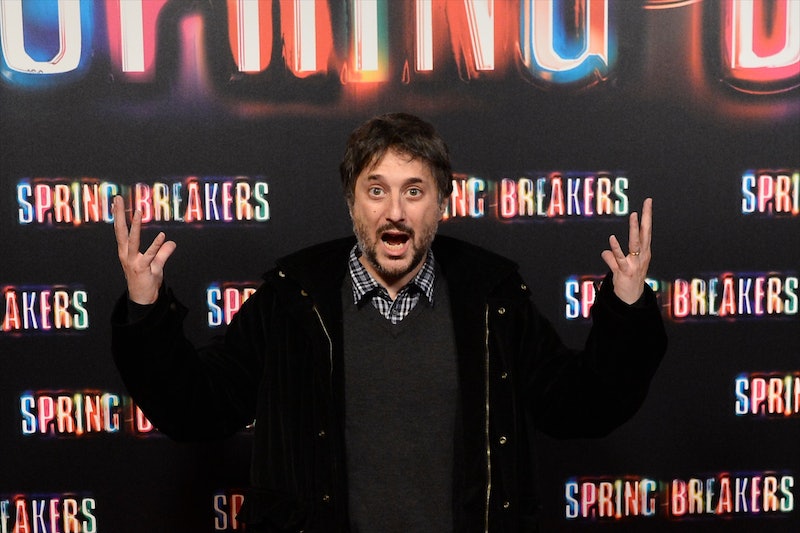 Harmony Korine is known for such in-your-face films about wild teens as Spring Breakers and Kids. Since he won't be involved with Spring Breakers 2, the director has a lot of spare time on his hands to develop a painting habit. Now, Korine has designed a horrifying purse for (wait for it) agnes b using those very same painterly skills. Handbag shoppers, beware.

Korine's leap to fashion is not exactly shocking in and of itself. He's already worked on films and lookbooks for Proenza Schouler, Supreme, Urban Outfitters, and, most recently, a campaign video for Dior Addict eau de Toilette. But whose idea was it for the man who created James Franco's metal-mouthed character in Spring Breakers to design a purse? I guess it would be a great carrying case for all of Alien's shit, though dark tannin' oil could spell disaster for the white canvas.

The creative team at agnes b. must have been very low on inspiration this season when they tapped Korine for their ongoing Artist's Series. They could have gone with, oh, anyone else. Banksy, for crying out loud! His art is practically begging to be placed on the front of a tasteful handbag. But no. They chose Harmony Korine, who designed a carpenter's bag with a sketch of a demon-monster child on one side and plain navy cotton on the other. The purse costs $395 and comes with a lifetime supply of nightmares.

In case you aren't familiar with the brand, agnes b. offers a selection of quirky, tasteful wares that are all very French. Pair these adorable swimmer-print shorts with Korine's terrifying cave-painting of Edward Scissorhand's evil spawn. Viola! A fabulous look for summer.

More like this
23 Times Meghan Markle Dressed Just Like Princess Diana
By Bustle UK
Yes, You Can Buy Off-White’s New Beauty Range In The UK
By Tomi Otekunrin
10 Show-Stopping Manicures From The 2022 BET Awards
By Paris Giles
35 Ideas For 4th Of July Nails That Go Beyond Red, White, & Blue
By Audrey Noble
Get Even More From Bustle — Sign Up For The Newsletter