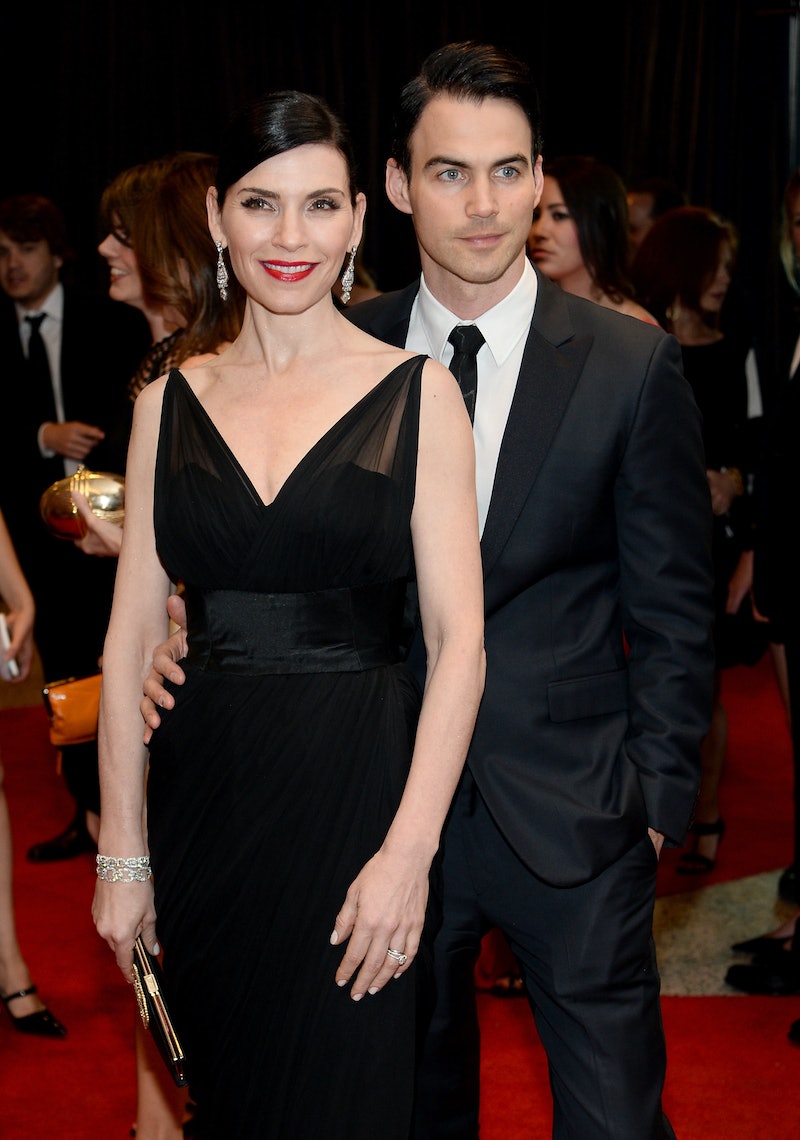 CBS' legal drama The Good Wife is a great show for so many reasons: the strong female characters, the intriguing cases, the superb guest stars, the tackling of ethically murky issues... But I'd be lying if I said part of the fun of watching The Good Wife isn't seeing who Alicia will end up with romantically onscreen and in real life. Who is Julianna Margulies' lucky, lucky husband?

I don't mean to diminish the show to a game of "shipping," but the star of The Good Wife has such a terrifically subtle sensuality that plays very well off of just about every male costar that this particular aspect is impossible to ignore. That's why the show's fan base is so passionate about who they want her to end up with. Some are devoted to seeing Alicia and Peter work things out. Some were praying for an Alicia and Will happy ending (may he rest in peace). And now some are lobbying for an Alicia and Finn pairing. (Things just got brighter for those people with this week's revelation that Finn's oft-referenced wife is actually an ex-wife. Score!)

But no matter who Alicia ends up with, 47-year-old Margulies is already happily married. And the actress must be just as sexy in real life as her onscreen counterpart, because she landed quite a catch. Meet Keith Lieberthal:

Couldn't you just drown in those eyes?

Margulies and Lieberthal were married in Massachusetts in 2007. Their only son, Kieran Lindsay Lieberthal, was born the following year. (How's that for a name?) Aged 41, Lieberthal is six years younger than his spouse — another point in favor of an Alicia and Finn matchup, since at 36, Finn's portrayer Matthew Goode is also younger than Margulies.

But the most interesting part of Lieberthal is definitely his profession. Unlike a lot of celebrities, Margulies married outside of the entertainment industry. So what does her husband do? You've got three guesses, and the first two don't count.

He's a lawyer! That's right, Margulies' husband does exactly what she pretends to do onscreen. How often do you think the actress goes to her hubby for courtroom tips?

The story of Margulies' and Lieberthal's meet-cute is straight out of a romcom. She ended up going last minute to an agent friend's birthday dinner. Said agent was formerly Lieberthal's RA when they both attended Dartmouth. Margulies initially assumed that Lieberthal was also an actor (because he was so handsome, natch) and thus wanted nothing to do with him. But as soon as she discovered his real profession, the sparks flew... And the rest is history.

Let's just take another moment to bask in this couple's flawlessness.

Here they are drinking champagne while being flawless

And finally, here they are being so clearly in love and also so clearly flawless at the same time

Sigh... Talk about a perfect couple. Kieran really lucked out in the gene pool department, didn't he? Here's to many more happy years to come for Margulies and Lieberthal.

Okay I lied, just one more

Ugh. They're so flawless it hurts.

More like this
Kaley Cuoco & Tom Pelphrey Just Made Their First Public Appearance As A Couple
By Hugh McIntyre
Natalia Dyer Just Revealed The Weirdest Thing About Her Charlie Heaton Romance
By Nola Ojomu
Here’s Everything Coming To & Leaving Netflix In June
By Alyssa Lapid
Britney Spears Met The Weeknd & Sam Levinson, So She May Actually Be On 'The Idol'
By Jake Viswanath
Get Even More From Bustle — Sign Up For The Newsletter