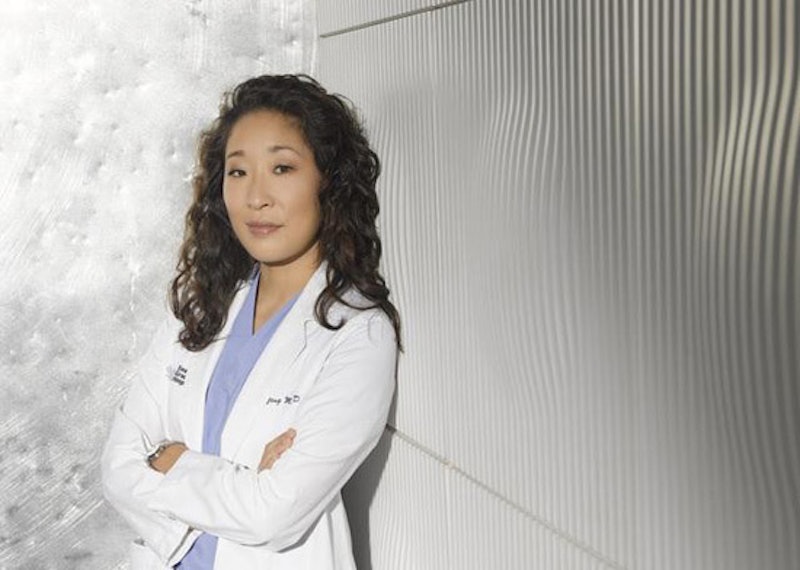 Saying goodbye to a favorite TV character is never easy, but when that person is Cristina Yang, one of the funniest, smartest, most feminist women ever on television, it's practically impossible. Yet those who tuned in to Grey's Anatomy's Season 10 finale on Thursday, hailed by ABC as an hour-long "Farewell to Cristina," had to do just that, as, after months of anticipation, Cristina (Sandra Oh) finally left Seattle for good. And, in typically Grey's fashion, her exit wasn't without one hell of a goodbye. Specifically, a possible terrorist attack, a heart transplant, and the unplanned kidnapping of a resident. Oh, yeah, and the introduction of MEREDITH GREY'S HALF-SISTER. But more on that later.

Seeing as it was a Grey's Anatomy finale, most fans expected something huge to happen during the course of the hour, and even before Ellis Grey's daughter announced her parentage, we weren't let down. In the first 10 minutes of the hour, news spread of an explosion at a Seattle mall, which sent dozens to the hospital and had reporters wondering about terrorist motives. At the same time, the heart for Cristina's child patient from past weeks had finally come in, and despite (or because of) the doctor's flight being in just a few hours, she scheduled the transplant for that day.

Yet despite all the drama at Grey-Sloan Memorial, the explosion felt like the secondary plotline to Thursday's episode, with Cristina's exit rightfully taking center stage. Watching her bid adieu to each of her colleagues, many of whom had become close friends, was heartbreaking. None of them, however, were as painful as the goodbye shared between Cristina and Meredith — or, rather, the goodbyes, as the twisted sisters had to take two separate moments to say their farewells. First, they had a rushed but heartfelt moment outside the hospital, where Meredith pushed Cristina in a cab and told her she loved her. It seemed like a perfect end for the duo, but after the commercial break, Cristina was back in the hospital, telling Meredith that it wasn't goodbye until they had danced it out. And in an epic, emotional throwback to season one, the best friends danced along to Tegan & Sara's "Where Does the Good Go." Cristina made Mer promise to call twice a month, not "let Owen get all dark and twisty," and stay out of the way of guns, bombs, and other dangerous things. "You're my person. I need you alive. You make me brave."

Cristina also imparted on Meredith the importance of not following Derek's dream of moving to D.C. if her heart wasn't into it. "He is not the sun. You are," Cristina said, and Doctor Grey seemed to take her friend's word to heart, as later, we saw the McDreamys get in a major fight about their future. Ah, if only they knew what surprise awaited them in Seattle, then maybe Derek wouldn't be so quick to leave...

Because at the episode's end, viewers were introduced to Ellis Grey's daughter, who'd been adopted early on but was hoping to find out more about her birth mother. Richard's expression of shock — the woman, who is black, is likely his daughter — should accurately sum up Meredith's feelings when she inevitably discovers Lexie wasn't the only half-sibling her darling parents kept secret from her all those years.

Yet in the end, the Grey's finale was all about Cristina. Despite her prior enthusiasm about moving to Zurich, it turned out that Yang was apprehensive about leaving Seattle, unwilling to leave when she felt things were still uncertain. "You and I are not finished," she told Meredith as she was scrubbing in for a surgery she didn't have to do. "George is dead and Izzie is gone and it's supposed to be you, and me, and Alex." Grey's fans have seen Cristina go through a thousand emotions over the course of ten years, but scared has rarely been one of them. It was a powerful moment, and Meredith's encouragement — "there is no finish line. You just have to go" — showed how far the friends have come over the last 10 years. Cristina's move will be hard on both of them, but, as Grey's has shown us so well, their friendship is strong enough to withstand anything. Whether in Seattle or Zurich, Cristina and Mer will always be each other's person.

— The credits, filled with photos of Cristina. Really, Shonda Rhimes? Tears by the first five minutes? You're too cruel.

— All those shout-outs to past characters: Cristina mentioning George getting hit by the bus, a brief comment about Izzie, even an ad for Eric Dane's new TV show.

— Cristina and Mer's perfectly uncomfortable hug. "What are you doing?"

— Leah and Shane's own goodbyes to Sloan-Memorial: understated but moving.

— The previews of next season's drama. Who's taking Cristina's seat on the Board, Alex or Bailey? Will Meredith move to D.C. with Derek? Will someone be mean to Alex at least once a day to make sure he doesn't get too full of himself? Four months, Grey's fans, until our beloved doctors, minus one, return to our lives and we find out what's next.