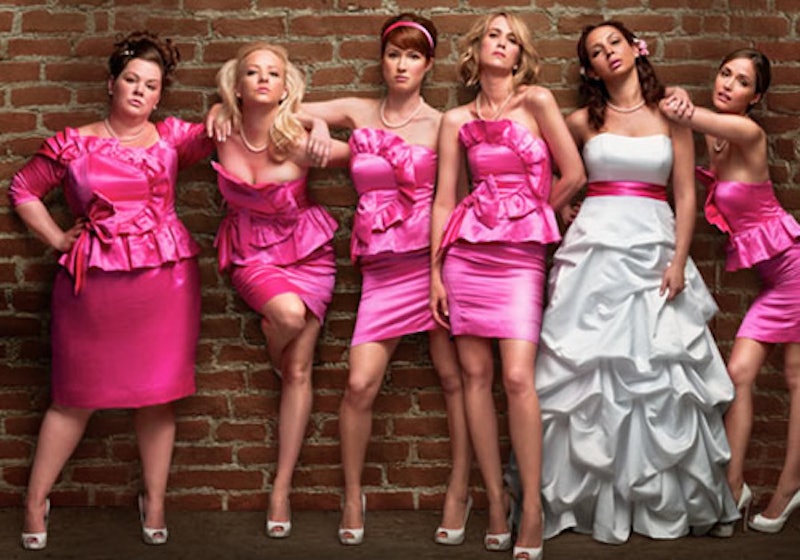 When my friends showed an interest in being my bridesmaids, I was shocked. First of all, I had zero interest in having bridesmaids, and secondly, what sort of self-loathing nut would even want to take on such a role? These were my friends?

Still, I was excited that my newfound bridesmaids — most of whom were self-appointed, mind you — would want to bear witness to my big day in dresses I chose for them. But I was also conflicted. Was I going to have to babysit them? Play referee if drama inevitably occurred?

As someone who has avoided being in other people’s bridal parties since the very first time I was asked to be a flower girl, I couldn’t fathom why these women wanted to be part of my wedding. I didn’t feel comfortable dolling out things for them to do, because I felt that I had already asked too much of them in the first place. I chose to tread lightly and ask very little, if anything at all, of them. For me, it was easier that way.

While I managed, overall, to stay away from most Bridezilla-type behavior, I did learn that bridesmaids are very important. So important in fact, that I’m kicking myself for not really taking advantage of what a bridal party is actually for. I mean, I could have been demanding back massages and stripping them of their right to wear make-up, therefore ensuring that I was the prettiest, dammit!

I came to realize there is indeed a difference between being a bad bridesmaid and good one. I’m not suggesting I had any bad ones, of course, I’m just imparting onto you, dear reader, how you can avoid being bridesmaid from hell. Here are your dos and don'ts.

DON’T ACCEPT THE ROLE IF YOU’RE NOT COMPLETELY INVESTED

You have to realize that over the next several months the bride’s wedding will be her main concern. If you break up with your significant other or your cat runs away, it will all be secondary. You'd best be invested.

DO BITE YOUR TONGUE AND GRIN

Don’t like the color of the dresses the bride chose? Too bad!

I hate Atlantic City. I think of it as pretty much the armpit of America, and Las Vegas isn’t too far behind it. Had my bridesmaids booked a bachelorette weekend in either of those places, heads would have rolled. It doesn’t matter how much you love your family’s dilapidated cottage in the backwoods of Tennessee. Think about the bride.

DO WORK ON YOUR SOCIAL SKILLS

If you’ve never met the other bridesmaids before and you happen to be one of those people who doesn’t get along well with others, then it’s time to work on your social skills. You don’t have to be nauseatingly sweet, but you have to at least know when to fake a smile or pull out your faux laugh.

You wanted to be a bridesmaid, right? Well, even if you didn't, it's time to step up to the plate and try to enjoy the demands that come with it. And when you get annoyed, just remind yourself that you could have said no and you can still say no, but you’ll probably lose a friend in a tearful screaming match so ... your call.

I’m not just saying this from a bride’s perspective — do you really want to jinx yourself?

DO GET READY TO SHELL OUT LOTS OF MONEY

The wedding aside, you need to consider the bridal shower, the gift for the shower, the bachelorette party, and whatever other excursions you and the other bridesmaids decide upon. When you sign up to be a bridesmaid, you’re actually signing up to financially treat the bride for the next few months. If she has a destination wedding, like I did, then you’re really screwed.

DON’T COMPLAIN ABOUT THE EXPENSES TO THE BRIDE

Dude, we're all poor at this point.

DO LIE TO THE BRIDE ABOUT HER APPEARANCE

If the bride looks a bit hungover, it’s OK to lie. It’s her big day after all, and do you really want to crush her dreams? Besides, a good friend knows when and how to lie.

DON’T BITCH ABOUT THE WEATHER

Please note that you are not the only one whose new heels will be sinking in the soaking wet, muddy park in which the bride has chosen for the ceremony. If you don’t think she’s been crying about it for days, you’re sadly mistaken. If you were a really awesome bridesmaid, you’d be decent enough to learn wizardry and bring on the sun.

DO MAKE YOUR RECEPTION SPEECH FUNNY AS HELL

My bridesmaid Amelia fucking killed it with her speech. She was amazingly funny, as always, and being the type of woman who doesn’t hold back, she was more than happy to share the intimate details of her banging a waiter in the bathroom of the Paris cabaret where I met my now husband.

Seriously? Does anyone really need to know that the bride screwed one of the groomsmen back in 2009? Keep it in the vault, girl.

It’s amazing how many brides get totally trashed at their wedding. (Honestly, it’s hard not to with an open bar.) But what’s most important is that you’ll be there to hold her hair back and her train to the side when she vomits after too much champagne.

DON’T HAVE SEX WITH A CLOSE RELATIVE OF THE BRIDE

Brothers and fathers are automatically off limits! (Grandfathers, if that’s your thing, are off limits, too.) If you’re single and looking to get some, it’s best to head to the groom’s side and have your pick of suitors there.

DO REMEMBER TO BRING EVERYTHING HOME

If the bride has split before everyone else, it’s your job, as Bridesmaid of the Year, to make sure anything of importance isn’t left behind. It's all in your custody until you can get it back to the bride. Besides, you were hoping she’d ditch those blue shoes before the night was over so you could borrow them anyway.

DON’T MAKE the wedding ABOUT YOU

Yes, it’s months and months of focus on this one woman in your life just for her one day, but just give it to her. Do you really want to deal with the consequences of NOT giving it to her? After all, the time may come when you want everyone to make it all about you someday, too.