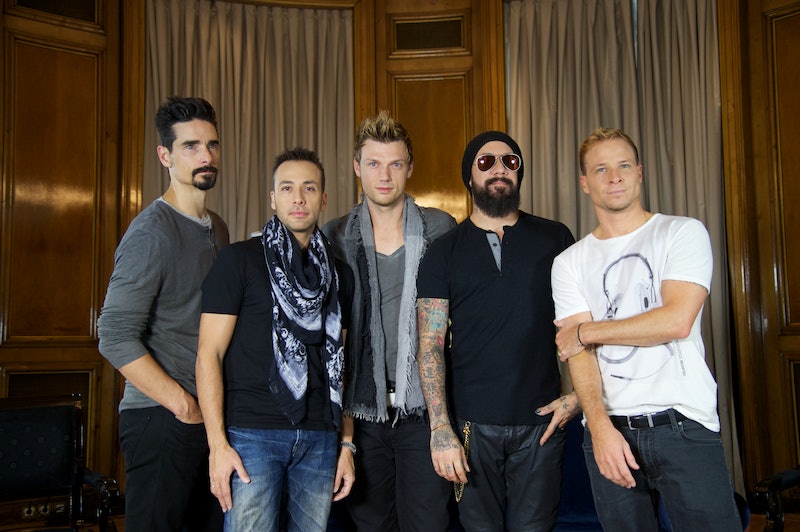 Yes, it’s 2014 and yes, we are still talking about our love of all things Backstreet Boys, New Kids on the Block, N’Stink (excuse me, N’Sync), 98 Degrees, Boyz II Men, and everything in between. The boy band nostalgia has come back in a big way, and I, for one, am not complaining. However, when I giggle in delight to the Nick & Knight tour announcement, plan my New Kids' Cruise reality show viewing party menu, or make up a ridiculous Backstreet Boys summer tour drinking game... sometimes I’m not met with as much enthusiasm from my fellow “adults.”

As much as the '90s boy band obsession is alive and well, as is the boy band hate. Sometimes when you’re blasting Millenium while cruising down the highway or dropping “The Right Stuff” at a house party, you might find yourself faced with some serious side-eye and groaning. Apparenttly some people weren’t appalled by Joey Fatone’s recent Backstreet dig. Ugh. I guess some people just have to take themselves soooo seriously and ruin your bubblegum fun.

But fret not Jeff Timmons in Chippendales-goers and lovers of Lance Bass’ radio show! For we have a handy-dandy guide for how to deal with the haters of your shameless boy band obsession.

Try to get to the root of the problem

Simply ask said hater, “Why must you crush my simple joy of harmonizing pretty boys?”

Feel the warm breeze and white linen against your skin. Relax, you got this.

Dance the pain away

When in doubt, do some synchronized finger-points and heel clicks with your fellow boy band lovers. And the rest of the world melts away.

If boy bands have taught you anything, it’s that everything they do is for YOU, girl. Tune out the haters, and listen to the boys.

You’ve seen the videos. You know all the moves. Challenge the haters to a dance battle and come out the victor!

Be the Howie, Joey, Lance or Drew of the situation. Be the nice guy!

Give the hater some sagely wisdom

Tell them all about the benefits of boy band fandom... and maybe do it in that low Kevin voice that all the moms love.

TURN UP THE VOLUME

Haters be damned! I’m having too much fun!