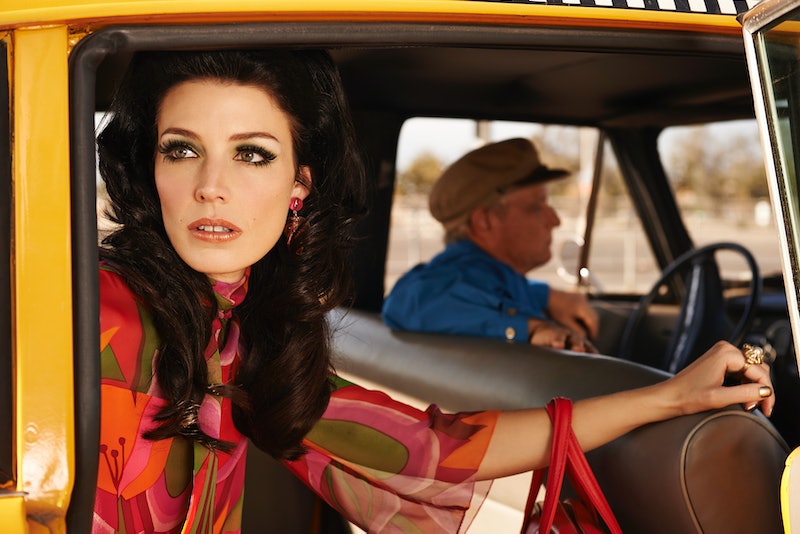 Did that really just happen? Mad Men aired its promo for the Season 7 mid-season finale at the end of Sunday's episode and we are absolutely beside ourselves because it really appears that Mad Men will kill Megan Draper. In the finale moments of the finale promo (below), text flashes across the screen, warning us that "It's all up in the air" before giving us one more look at Megan sitting peacefully on her flight back to California with ominous music and a sound effect that sounds a lot like a plummeting airplane. That looks like doom and gloom, if you ask me.

Now, for a show that's known for showing us next week's promos without actually telling us anything about the next week's episode — unless you can translate "What?"/"Shut the door"/"Sit down"/"Pete!"/(maniacal laughter) into any sort of plot summary — this week's promo sure was ominous and borderline spoilery. We've thought for months that Megan was doomed to die — though, the Sharon Tate theory has prevailed as the vehicle for her demise — and it seems that Mad Men really will go there.

Why else would the show give us that ominous clip of Pete's girlfriend sitting on the plane, perturbed by "New York Pete" while Megan was just a few seats away, smiling out of the window? Why else would they show the faceless stewardess quickly close the first class curtain if not to suggest that it was "curtains" for Megan and Bonnie? Sure, the scene was an opportunity to compare their stories, but there seemed to be a layer of some other unshakeable feeling. It was impossibly eerie. And as if they could hear our suspicious minds, AMC followed it up with a promo that all but dares us to take to the internet and declare that Megan will definitely die.

But are we going to believe them? Mad Men has never teased something that integral to the following week's episode. Either the series and Matthew Weiner are seriously, deeply trolling us, or Megan is about to die on that airplane and it's going to send Don into a tailspin just in time for the finale, leaving us for an entire year of wondering how this mental burden will take our antihero down. The promo even brings in the notion that whatever happens next week could drive Don to kill himself — fulfilling the other prevalent Mad Men theory that Don is the falling man in the open credits.

I mean, what else would bring out the big, shocking finale fireworks like a major death in the last few minutes of the mid-season finale — and a major death that absolutely ruptures Don's life? Especially after this week's episode ended with an impossibly sweet, happy moment shared between Peggy, Don, and Pete at their local Burger Chef? It would be a little disappointing to have guessed Mad Men's big "twist" midway through Season 5, but then again, Mad Men has never been about "shocking" moments. The series it at its best when it deals with the aftermath of the big moments.

So even if Megan dies, as we all predicted, we'll still have the chance to use our shocked face because what follows will surely be even bigger. Practice up, friends.