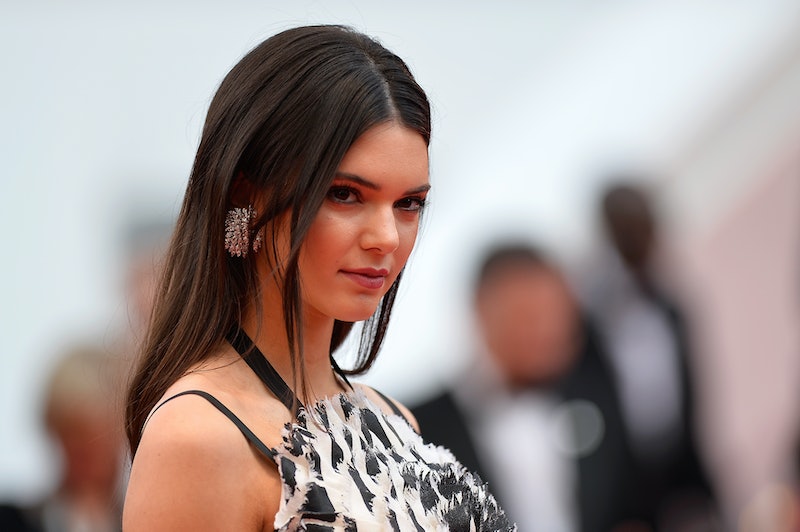 With a single flub that called her reading comprehension skills into question, Kendall Jenner became one of the in-jokes of Sunday's Billboard Music Awards. Jenner fumbled a teleprompter line while introducing 5 Seconds of Summer before their performance, with some claiming that she nearly introduced the band as One Direction instead. (It's not as big of a mistake as one might think, considering One Direction has been one of 5 Seconds of Summer's greatest supporters on their rise to fame.) In the aftermath of her public faux pas, Jenner tweeted about her Billboard Music Awards mistake, proving that the best way to handle a situation like that is to laugh at yourself.

Jenner was understandably nervous going into the moment, as the Billboard Music Awards was her chance for a solo presentation without the rest of the Kardashian-Jenner clan present. It was a lot of pressure for a girl who is only 18 years old and, though it would have been ideal if she'd powered through without a single error, Jenner can't really be blamed for mixing up her words. Sure, it's a perfect opportunity to make as many Hooked on Phonics jokes as we possibly can, but on the grand list of mistakes she could have made — cursing, tripping, inappropriate improv jokes — this ranks pretty low on the list.

After her presentation, Jenner tweeted:

She later tweeted a link to a since-deleted Instagram video. According to E! Online, the video featured Kourtney Kardashian's boyfriend, Scott Disick, teasing Jenner's nervous fumble by pretending he'd thought he'd won an award instead of Lorde and joking, "Guys, I'm really not such a reader!"

Why Jenner removed the video has yet to be revealed, but the fact that she responded to the backlash against her mix-up with humor instead of anger or embarrassment goes a long way to prove how down to earth Kendall Jenner truly is. Sure, she might have been embarrassed. Sure, she might have gotten home from the Awards, buried her face in a pillow, and screamed until she felt better. But her tweets show that she's not dwelling on it and neither should we. Everybody makes mistakes, famous family or no.

More like this
Stormi Just Walked A Red Carpet With Mommy Kylie Jenner & Daddy Travis Scott
By Hugh McIntyre
Is Megan Fox Pregnant? MGK Gave A Shout-Out To Their “Unborn Child” Onstage
By Hugh McIntyre
Doja Cat Wore Surrealist-Inspired Schiaparelli To The BBMAs
By Dominique Norman
Teyana Taylor Channeled Aaliyah In Y2K Thong & Leather Pants
By Dominique Norman
Get Even More From Bustle — Sign Up For The Newsletter