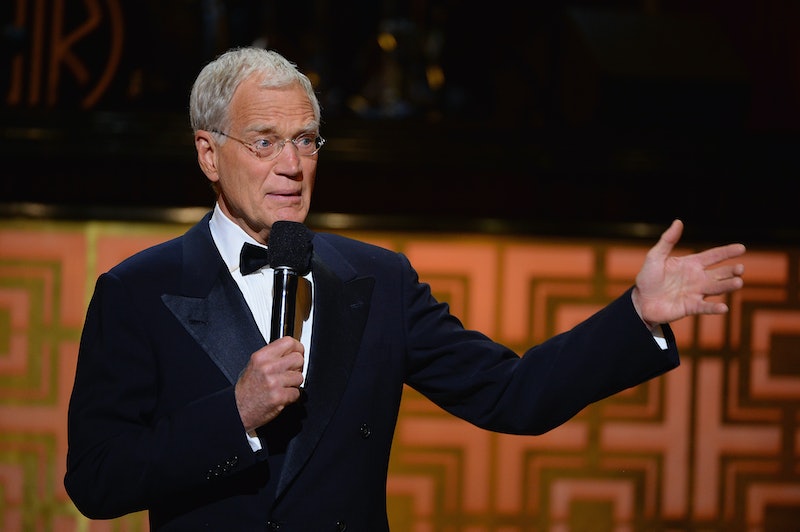 Earlier this month, Monica Lewinsky's Vanity Fair article was published, and Lewinsky is finally receiving some contrition over her treatment at the time — though it might've sounded better about 16 years ago. The Late Show's David Letterman is sorry for "humiliating" Lewinsky throughout the late 90s, Letterman acknowledged in a conversation with Barbara Walters. In her Vanity Fair exclusive, Lewinsky detailed the daily indignities and shame she suffered thanks to her affair with President Clinton and the subsequent national scandal.

Lewinsky's been pretty straightforward about how she views her relationship with Clinton: She believes he took advantage of her, but maintains the relationship was entirely consensual. Lewinsky considers the abusive elements of the affair to have been what came after: both efforts by the Clinton administration to smear her reputation, and daily and nightly media ridicule and speculation.

Letterman, like former late-night rival Jay Leno and a host of others, has played a big part in dishing the casually sexist barbs Lewinsky's so familiar with. For example, this gem: "Monica Lewinsky was on Larry King Live tonight. Monica really liked Larry King. Actually, she likes any guy with a desk." At least, now, Letterman seems to understand the problem with this.

Now I started to feel bad because myself and other people with shows like this made relentless jokes about the poor woman and she was a kid. She was 21, 22... I feel bad about my role in helping push the humiliation to the point of suffocation.

While it's always good to come clean, however late it may be, it really would've been nice if Letterman, or any of those powerful figures in media, had stepped up to the plate when the scandal was at its apex.

Because being demonized by mainstream media has its effect, and it's no laughing matter. In her Vanity Fair piece, Lewinsky described in painful terms her mother's insistence on staying by her side during the trying times, fearing the emotional weight of the explosive scandal would drive her to commit suicide. And by Lewinsky's own description, that was a very real concern.

The shame, the scorn, and the fear that had been thrown at her daughter left her afraid that I would take my own life—a fear that I would be literally humiliated to death.

In spite of just how "too little, too late" Letterman's admission may seem, it's worth remembering that he wasn't the only one. Some other prominent media names over the years could also stand to offer their mea culpas — don't think we've forgotten about you, Jon Stewart.

More like this
23 Abortion Funds In States With Trigger Bans To Donate To
By Emma Carey
Cardi B Explains To David Letterman Why She Uses Her Star Power For Politics
By Jake Viswanath
How To Fight For Reproductive Rights, Based On How Much Time You Have
By Courtney Young
The Music Industry Continues To Fail Black Women
By Precious Adesina
Get Even More From Bustle — Sign Up For The Newsletter