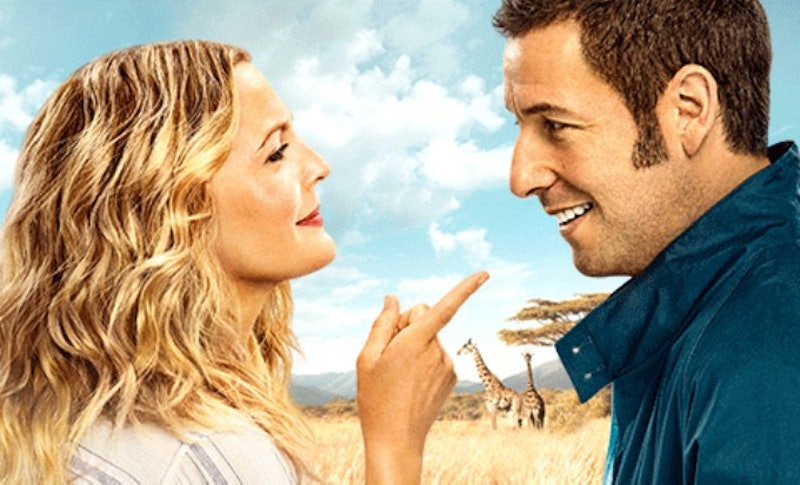 Let's be honest, as much as we love Drew Barrymore (and we sure do love her), her latest effort with Adam Sandler — the cringe-worthy new comedy Blended — doesn't exactly put them in the running to be our modern day Bogart and Bacall. Which is too bad, really, considering their previous efforts 50 First Dates and The Wedding Singer (the latter being one of the best romantic comedies of the '90s) were genuinely sweet and funny movies. We miss those Adam and Drew pairings and would take them any day over this Adam-and-Drew-go-to-Africa-and-horrendously-offensive-hijinks-ensue variety. Of course, this isn't the first time co-stars have re-teamed to play couples again, only to find a less romantic rendezvous. Case in point:

Now hear us out on this one. We love 1998's You've Got Mail as much as the next rom-com fanatic, but it's basically Catfish of the AOL era. Not only does Joe F-o-x (Hanks) run poor, sweet Kathleen's (Ryan) quaint children's bookstore out of business, but he lies about his identity online and she falls in love with him. Okay, maybe it's as unsettling as Annie's (Ryan) cross-country, let's say jaunt (stalking sounds so negative) to get a glimpse of her radio crush Sam (Hanks) in 1993's Sleepless in Seattle. Still, their original pairing is so hard to top and that romantic, An Affair to Remember-inspired meeting at the top of the Empire State Building made these two rom-com icons. Without Sleepless in Seattle, there's no You've Got Mail.

1990's Pretty Woman was a sexy, fun, hit romantic comedy with that classic boy-meets-prostitute, boy-falls-in-love-with-prostitute, boy-"saves"-prostitute-but-really-she-saves-him trope. It was the movie that turned Julia Roberts into a bona fide movie star and solidified Richard Gere's spot as a '90s hunk, thanks to their amazing chemistry and some iconic movie moments (not to mention clothes). Where the hell that chemistry and sense of sexy fun went by the time 1998's flat, dopey Runaway Bride rolled around, we'll never know.

Okay, this one is a little bit of a cheat considering these two never starred in romantic comedies together. But, hey, since 1997's Titanic is one of the most romantic movies of all-time, it gets a pass. As Jack and Rose, DiCaprio and Winslet made moviegoers hearts soar and then break with promises of "I'll never let go." In fact, people love Jack and Rose so much, they actively root for DiCaprio and Winslet to be together in real life. Sadly, their on-screen reunion in 2008's Revolutionary Road was probably not the pairing most fans were hoping for. Instead "flying" on the deck of the Titanic, these two were now flying barbs at one another as horrendously unhappily married couple Frank and April. Even the iceberg in Titanic didn't leave us feeling so cold.