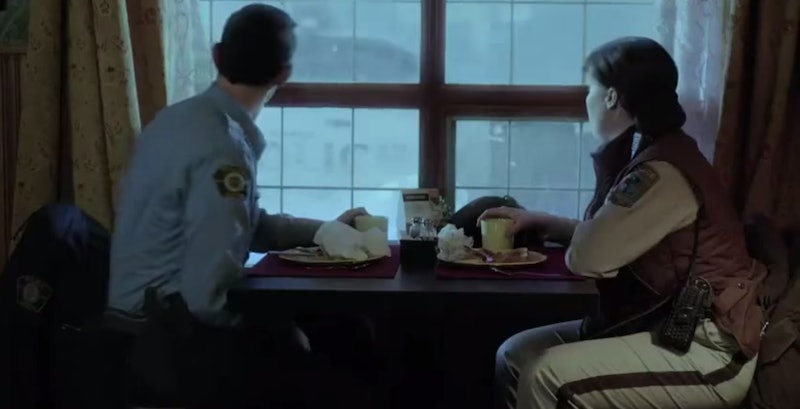 Forgive me for being uncouth, but I must get this off of my chest: FUUUUUUCK. Right when I thought Tuesday night’s FANTASTIC episode of Fargo had hit all of its big moments (Lester Nygaard breaks out of the hospital, attempts to frame his brother, plants a gun in his nephew’s backpack, and is spotted leaving the house by his nephew) (OH! Tornado monster Lorne Malvo sets up a shootout to distract the cops from Stravros Milos and gets Chumph killed by the SWAT team) (AND!!! Lorne Malvo slits Mr. Numbers’s throat) and couldn’t get any crazier, Gus Grimly shoots Molly Solverson.

It’s an accident, of course. A terrible, blizzard-related accident. Grimly and Solverson chase Lorne Malvo and Mr. Numbers in the storm, Solverson goes after Lorne Malvo, and shots are fired. A person walks toward Grimly. Grimly asks the person to halt. The person does not. He cannot see (that darn blizzard), but he doesn't want to take any chances. He shoots. Solverson falls to the ground. And that's the last we of Solverson during the ep. FUUUUUUUUUUUCK. This is a stinker of a mess. Sweet, sweet Grimly. He never wanted to be a cop.

...Okay, I peeked. Alison Tolman is in 10 episodes. "Buridan’s Ass" is only the sixth episode of the season. Unless this show goes very supernatural (hey, the torrential fishstorm that killed Dmitri Milos was really bonkers. I don’t know if that was a Lorne Malvo special, purely coincidental, or something spooky) and Solverson comes back as a ghost, I reckon this means Solverson will survive. If our beloved Solverson survives the accident, I predict she will continue to do everything she can to solve the case. It'd be quite a twist if Solverson was like, "I'm out! Have fun figuring out who murdered all of those people without me."

Oof. She better survive. Without Solverson, Lorne Malvo will run circles around the other knuckleheads until the world implodes. Without Solverson, I don't know how this show will go on. I've said it before, and I'll say it again: SHE'S OUR SOLVERSONLY HOPE.

What does the accident mean for Solverson and Grimly? AUGH. I can't think about their budding romance at time like this. I have bigger fish to fry.