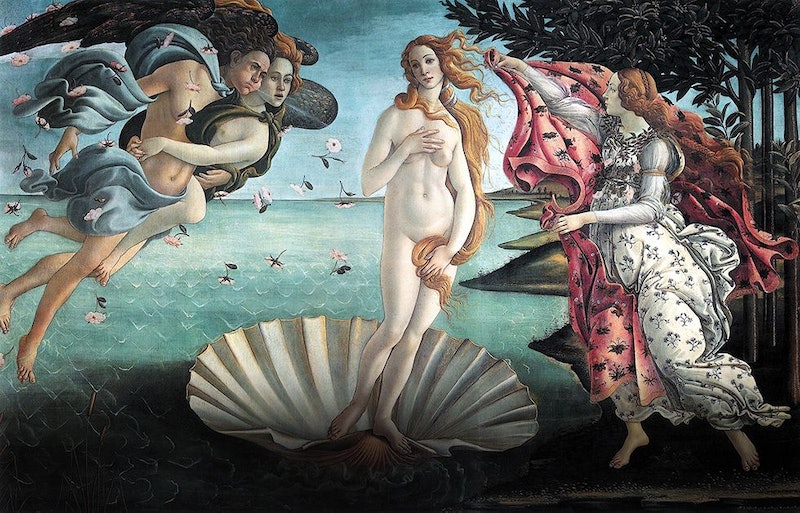 Excessive Photoshop usage in ads and on magazine covers is so common, it seems hardly a week goes by without us being witness to a crazy unrealistic thigh gap or a creepy, shoulder-less floating head. In an effort to prove just how impactful these images can be on our society’s ideas of beauty, Take Part photo editor Lauren Wade decided to give the women in a variety of famous paintings the same airbrushing treatment — and let’s just say, the effect is not pretty.

In the examples below, Wade used a digital “liquefy brush” to alter and whittle down the waist, hips, and thighs on these famous female forms to replicate today’s Photoshopped standards for women’s bodies. “There may be something sacrilegious in that,” Wade wrote of performing some virtual plastic surgery on these long-celebrated portrayals. “But the same could be said for our contemporary ideas of beauty.”

On Sandro Boticelli’s Birth of Venus, Wade slimmed down the waist and made the breasts bigger. She gave Raphael’s Three Graces, a similar treatment, smoothing and slimming the women’s waists, stomachs, thighs and backsides. All of the differences from the “before” painting to the “after” shots are scarily drastic.

While I appreciate the point Wade is trying to make, this project is a little problematic in that it suggests that these famous paintings are all realistic of women during their respective time periods. The reality is that while they may seem more realistic than the Photoshopped-to-perfection stuff we see now, the artists were all known to have taken their own liberties to make their paintings more pleasurable to the male eye — see evidence in these pinup illustrations and the photos that inspired them. All you have to do is look at those, or the abnormally long back of the woman in Jean Auguste Dominique Ingres’ Grande Odalisque to see what I’m talking about.

Still, while female idealization has been going on for longer than most people realize, the fact remains that digital retouching these days has reached a whole new level of ghastly. It seems no one, even the fittest or skinniest women among us, can escape the Photoshop torture chamber and that is a definite, serious problem. I applaud Wade for calling out these unattainable industry standards of beauty and continue to hope that one day, we’ll be celebrating figures of all shapes and sizes.

You can see many more images from Laura Wade's project here.