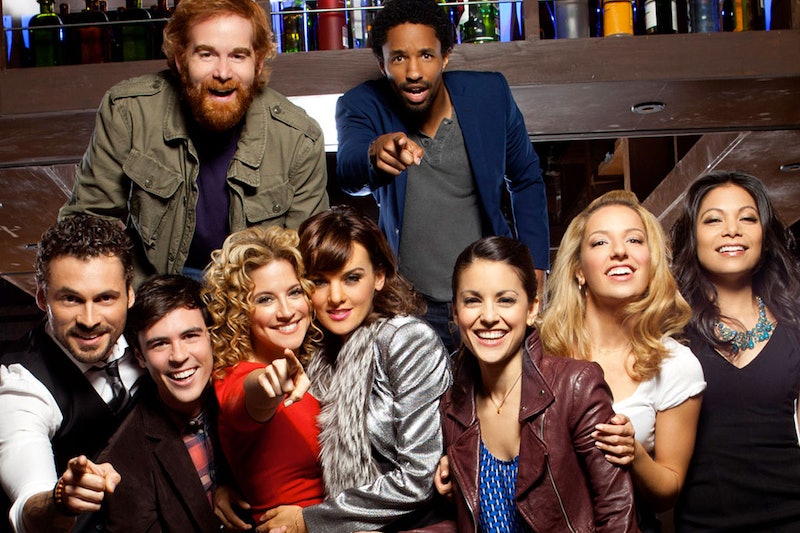 The first good news came a week ago, when it was announced that Mixology would not be renewed for a second season. But the even better news comes right now, at 10:01pm PST, when we can all sing out in unison: IT'S DONE. IT'S OVER. Mixology has reached the end of its 10-episode run, and so too have we reached the end of our 10-week national nightmare. It's perfectly understandable to be experiencing small convulsions right now, muscle spasms — that's just your body beginning the de-stressing process. Eventually your body will have forgotten it ever experienced Mixology in the first place.

In real funerals for real humans, we eulogize with an emphasis on the positive attributes of the deceased. Maybe he was a bank-robbing furry who mistreated his ferrets, but James was also really sweet to cashiers, you know? Sally, for all her faults, never once paid rent late. Hitler probably had a lot of people talking about his "artistic promise" at his ceremony, if there was one. You look toward the sunny side.

...but Hitler never had a walking skidmark of a friend named Bruce, which makes a positive Mixology eulogy nearly impossible to deliver. So with that in mind, we're just going to say what we really think of these 10 people ABC tried to get us to be friends with this spring. Call it a roast; call it a pile-on. Call it whatever you want, as long as we set fire to it when we're done.

I'll first say something in your defense, Liv: anyone deriding your character for stepping out on her fiance has never been in an overlong, unfulfilling relationship. You weren't a bad person, and aside from the ridiculousness of entertainment bloggers criticizing TV CHARACTERS' actions ("10 Ways Tony Soprano is a Monster!"), your storyline made for semi-compelling drama. On a show seemingly written by the cocaine mound on the writers room table, your quest for excitement was actually human and engaging.

But Jesus, that baby voice. You didn't sound that way in That Awkward Moment! Stop it, Kate Simses!

As an American man, I already have a natural aversion to any guy with a British accent. But you backed up the douche-nunciation with, among other things:

Somehow, Ron, you were still my second-favorite character on the show.

I've got to give you some credit, Kacey. Every episode we were reminded that you guys were just 10 strangers "looking to find love." And in your case... I actually believed you. Dominic's hot Latin sex wasn't enough for you! You needed and wanted romance, and while I didn't care, at all, your plot at least backed up the stated premise of the show. You effectively won Mixology.

Something nice: I would have been legitimately thrilled to find you as my bartender! Pretty much every one of my drinks would be "on the house," and you frequently abandoning your post to have sex and/or serenade some lady with your guitar would leave the bar open for me to steal whatever else I wanted. Wallet-wise, you'd be my guy.

Something not nice: I really think you needed to find a new job is all.

Of the 10 "characters" we followed this spring, you were arguably the most forgettable. (Which, oddly enough, I mean as a compliment!) Still you gave us some fun memories. First, that time you got turned on by watching Bruce eat floor pizza. And second, when you lost your mind trying to learn what your gyno thought of your vagina. Hahaha someone THOUGHT UP THEN WROTE THOSE STORY BEATS FOR YOU.

"What if we wrote in a token black character who, like, knew he was the token black character? And commented on it at first -- I know, I know, I'll let you finish laughing -- before just becoming the most boring character on a show already overflowing with them? That would be funny, right?" "Meta, dude!" "Haha I knew you'd say that. Always with the fucking meta. But that's what makes our show sort of like 30 Rock, you know?" "Why do we always end our sentences in question marks?" "Umm, because we're baller?" Fist bump with the explosion move at the end. "We've got more cocaine, right?"

My fundamental problem with you, Jessica, is that on paper you were actually an interesting character: a mom, from New Jersey, making the trip to Manhattan for a blind date. There was something to explore there! But all too quickly you receded into the background, only to be brought back out in the end by... Bruce.

In the end, none of us could save you.

Maybe this reflects poorly on me, your eulogizer, and maybe this is the worst backhanded compliment but Tom — you were the most accurately-drawn human at the bar that night. I understood where you were coming from, what you wanted, and how those things interacted to create (relative) conflict and (light) comedy in your brief but very plaid life. My guess is that you were based on one of Mixology's creators, which made writing you that much easier?

Look at me, droning on and on when I promised I wouldn't speak for more than 15 seconds!

You were a self-proclaimed "bitch" who pined for a "real man," someone who wasn't "afraid to slap you around." Aggressive toward Hawaiians (you hated their flip-flops) and Tom (you thought he was a pansy, until he started pretending like he wasn't), you will be remembered primarily for the look of abject misery you sported for the duration of the series. Whatever comes next — Heaven, Hell, an underwhelming NBC pilot about sexy obstetricians — I hope it's not nearly as shitty as a night out with your friend seemed to be!

I've already wasted hundred of words on you, Bruce. I've excoriated your casual misogyny, your hygiene, your inflated ego. I strongly disliked you, as much or more than any television character of the past decade. And I worry, legitimately worry, for the career of the poor guy who played you. He's going to have to change his hair color... who knows, maybe start over on Canadian television. Because of you, life will be more hard than usual for Andrew Santino. You did that. And all I have left to say to you is this: