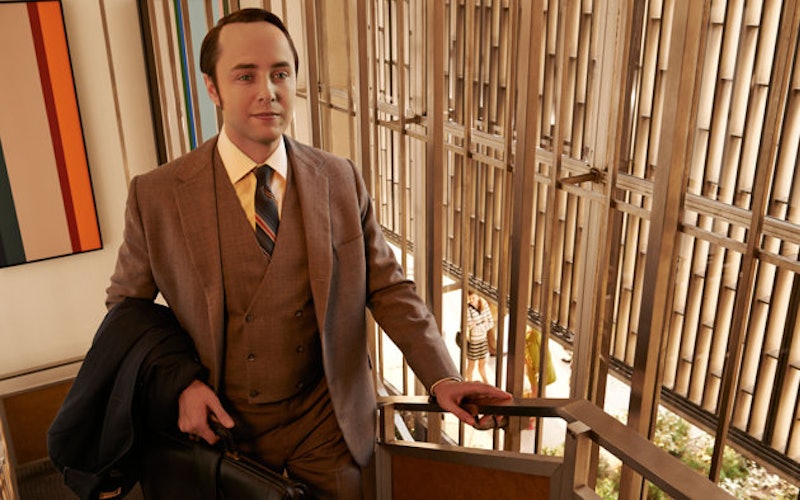 Fans of AMC's Mad Men are no stranger to the rumors, speculations, and conspiracy theories swirling around the idea that Megan Draper is going to be murdered/die in a plane crash/is already dead. Ostensibly, these rumors were sparked when in one scene Megan wore a shirt that Sharon Tate (victim of the Manson murders) once also wore. But we can't help but feel that these abundant theories of her demise are nothing more than wishful thinking — after all, it's no secret that she isn't exactly the most well-liked character on the show.

Last week's episode saw the resurgence of these dormant speculations when Megan Draper boarded a plane and the subsequent Mad Men promo stated "It's all up in the air" with very dramatic music that some claim sounds like a plane falling. Matthew Weiner and the other folks behind Mad Men have to be pulling our legs at this point, right? But why would they be fueling the fires of Megan death theories, if not to distract us from the truth: That another character entirely is about to kick the bucket.

Our theory is, all this Megan/Sharon Tate nonsense is really just a red herring to disguise the fact that Pete Campbell is about to meet his maker. Naturally, you'll need some proof:

He's been marked for death since Season 2.

On a show as meticulously crafted as Mad Men, nothing — not one prop, not one song, not one word — is unintentional. Back in the Season 2 finale, "Meditations in an Emergency," the world was holding its breath through the Cuban Missile Crisis. Pete's wife Trudy, fearing an outbreak of nuclear war, prepared to run away from New York City... but Pete refused to leave. "If I'm going to die, I want to die in Manhattan," he said.

For the first six seasons of the show, Pete lived and worked in Manhattan, so it seemed logical to assume that of course he would die there. But now, in the seventh and final season, Pete has relocated to sunny Los Angeles, and his words in Season 2 have a more prophetic-sounding tone to them. Could the latter half of the final season feature Pete tragically dying on one of his return visit to the Big Apple?

There's a gravity-related curse on his family.

Pete Campbell is already surrounded by tragedy: all of his family members seem to fall to their deaths. In Season 2, Pete's father died when his plane fell out of the sky. In Season 6, his mother died when she fell off a cruise ship. We've already seem Pete prone to gravity-related mishaps (see the hilarious GIF above) — with both parents dead of falls, is it Pete's turn next?

One theory surrounding Pete's fate is that the falling man in the show's iconic opening sequence isn't Don Draper as everyone assumes — it's Pete. He's certainly the character surrounded by the most references to falling, windows, and death. Will the show end with Pete taking a header out of a window in SC&P's Manhattan office building?

Pete's got a death wish.

Whether he's getting into fistfights with colleagues, crashing cars in hotel lobbies, or walking into solid concrete columns, Pete has a knack for inflicting physical harm upon himself.

And there have been other, more subtle hints that Pete has considered taking the coward's way out. Whether it be insurance salesmen assuring him that policies cover suicide, or Pete trading in a wedding gift for a rifle, omens of death seem to follow him everywhere.

That rifle in particular has come up several times throughout the show, always seeming to shadow Pete in moments of existential crisis. And you know what Chekhov said: a gun introduced in the first season must be fired before the series finale. (I might be paraphrasing a bit.)

When someone actually asked Pete portrayer Vincent Kartheiser how he would feel about his character dying, the actor flippantly told Vanity Fair, "If there was a show to be killed off of, it’s this one. I would love that." You hear that, Matthew Weiner? Kartheiser's on board, so you can go ahead and give Pete that big dramatic death you've so clearly been building towards for five years now.

Whether Pete commits suicide or dies in a freak accident, we're pretty sure it's only a matter of time until the ambitious advertiser meets his maker. We only hope it's a slightly more dignified death than tripping and falling down the stairs. Again.

Also, I would be remiss if I wrote a whole article about Pete and didn't include this priceless GIF:

More like this
Grey's Anatomy Fans Are Worried They Figured Out The Sad Reason Japril Returns
By Brad Witter
TikTok's Spooky 'Heartstopper' Fan Theory Will Make You Question Everything
By Nola Ojomu
A Megan Fox “Breakup” Text Inspired Machine Gun Kelly’s Movie ‘Good Mourning’
By Stephanie Topacio Long
Is Megan Fox Pregnant? MGK Gave A Shout-Out To Their “Unborn Child” Onstage
By Hugh McIntyre
Get Even More From Bustle — Sign Up For The Newsletter