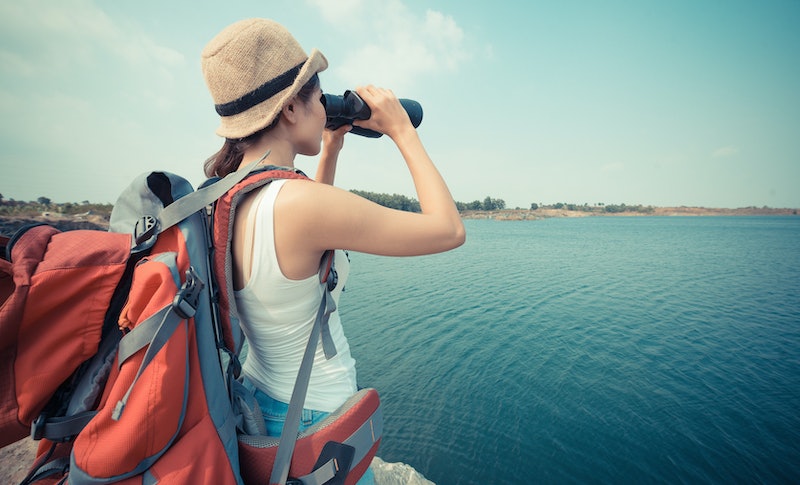 Between graduation and the "real world," there exists a magical time of total freedom — that is, if you don't sabotage it for yourself by spending those three months totally freaking out about finding a job. The months after you graduate college are likely the last chance you'll have for significant travel time before you start carving out your career path (let's hear it for American vacation policies), and if you really learned something over the past four years, you'll know to take advantage of that.

Sure, that's easier said than done when it comes to cost. Travel is expensive, and without the certainty of a job to come back to or impending paychecks to foot the bill, it can be nerve-wracking to head out of town for an extended period of time.

But this is exactly when should be traveling: you don't mind staying in cheap hostels, you're up for backpacking less-traveled locations, and you can probably still get away with using your student I.D. for discounts. In other words, it's the ideal time for budget travel. So before you start sending your resume in for every entry-level opening you can find, check out the best, cheap travel options below — because there's no time to explore the world like the present.

The flights are pricey, but once you're there, you can skate by on practically nothing. According to TripAdvisor's annual TripIndex survey, three of the most affordable international destinations can be found in southeast Asia: Vietnam (#2), Thailand (#6) and Malaysia (#7). If you love the food, you're in luck — you can eat like a king for less than the price of Happy Meal stateside. If you love to party, time your trip to one of the legendary Full Moon parties in Thailand. No matter what your intentions, each exotic locale has bustling cities, pristine beaches, and wide-open country to explore — stay for as long as your budget permits.

Fly IcelandAir to anywhere in Europe, and you'll score a free stopover in Reykjavik, the country's capital and starting point for — trust — one of the more epic road trips you'll ever go on.

Accommodations and dining out aren't super cheap, but you'll make up the money you spend there once you hit the road, since every jaw-dropping sight-seeing locale (from Gulfoss, Iceland's Niagra Falls, to Jökulsárlón, the chillingly beautiful glacial lagoon) is free. All you need is a car, a good map, a guidebook, and some snacks. (And a guilt-free conscious when you splurge on a silica salt rubdown at the Blue Lagoon geothermal spa.)

Leave Cancun and Acapulco to the spring breakers — for a real beach getaway, look towards Nicaragua (which means "surrounded by water"). Recently, it landed on Lonely Planet's list of best value destinations. Since it's one of the closest destinations in Central America, airfare is relatively cheap. And, because it hasn't been totally overrun by tourists (yet), you can still score hostels with amenities for less than $30 a night. It's the kind of place where you totally relax and go with the flow, from surfing in coastal villages like San Juan del Sur, to enjoying cheap drinks in colonial cities like Granada. Who doesn't need that after four grueling college years?

New Orleans: Not just for Mardi Gras, anymore. The Price of Travel's Backpacker Index ranks the Big Easy #2 in affordable North American destinations. Turns out Bourbon Street isn't just great for the nightlife, it's also great for your wallet — drinking and eating in New Orleans is cheaper than most of major cities in the States. You can also find cheap hostels in the area for around $20 a night, which is way, way less than what you'd pay at city hotels pretty much everywhere (and, chances are, they'll have more Southern charm than city sleaze to them).

Often overlooked, Portugal can make for a surprisingly cheap European destination. The 2014 Prices and Earnings report found that Lisbon's mid-range hotels ring up at an average of $80 per night, which is 50 percent less than the global average — and, let's be honest, you'd probably prefer a party-friendly hostel, anyway, which cuts your costs down even further. Portugal has a similar vibe to Spain, with less tourists and way less total expenses, plus more beaches. It also has a great wine region and prices: a bottle of wine can total less than five euros, which is exactly the kind of classy budget drinking you want post-college.

While some of Europe's more well-known locales are made for splurging (think luxury hotels in Paris and extravagant Italian meals), Dublin, Ireland is a somewhere you can get to relatively inexpensively and enjoy for under $75 a day, according to the Price of Travel's Backpacker Index. That's not to say the city isn't expensive — this is a destination that requires research in order to find the best deals, because it's easy to get caught up in tourist traps. But, if you're looking for a party town with history, Dublin is well worth the extra effort.

According to the Backpacker Index, Sofia, Bulgaria is Europe's third-cheapest tourist city, where you can get by on around $27 a day — a total that can offset higher airfare, since Bulgaria isn't the easiest destination to reach. It's a charming city, in the same vein of other Eastern European capitals like Prague and Budapest. But because it's not a typical pick, even backpackers can afford a little luxury here, which might be especially nice if you've been pinching pennies during a longer European adventure.

Bolivia is one of the poorest countries in South America, but what it lacks in cash flow, it makes up in beautiful nature sites, wild adventure opportunities, and affordable food and accommodations. Bolivia is a backpacker's dream, from the salt plains to Lake Titicaca to the city of La Paz — and, according to Lonely Planet, you can see it all for less than $50 a day.

You can also hike the renowned Inca trails throughout the country, for much less than what you'd pay to see Machu Picchu in neighboring Peru. As long as you eat and drink at local restaurants (which are well worth it), you'll keep your tab in a totally reasonable range.

Shockingly enough, visiting Sin City is twice as cheap as vacationing in Honolulu or New York, according to TripAdvisor's TripIndex survey — the cost of one night in Hawaii can net you three nights in a Las Vegas hotel for almost the same price. And, while Vegas does have a reputation for causing tourists to shell out major cash on hotels, dining, and entertainment, you can actually score a ton of deals if you do you research. Vegas: Not just for bachelorette parties, anymore. Just steer clear of the craps table — one wrong move there, and you could blow your whole summer budget.

More like this
An Open Letter To The Person Who Bought Steve Jobs’ Birkenstocks For $218,000
By Ginny Hogan
8 Money Saving Experts To Follow For Accessible Advice
By Maxine Harrison
44 Impressive Secret Santa Gifts That Won't Break The Bank
By Sadie Trombetta and Lauren Grant
Why Portia From 'White Lotus' Is Absolutely An Aquarius
By Nina Kahn
Get Even More From Bustle — Sign Up For The Newsletter