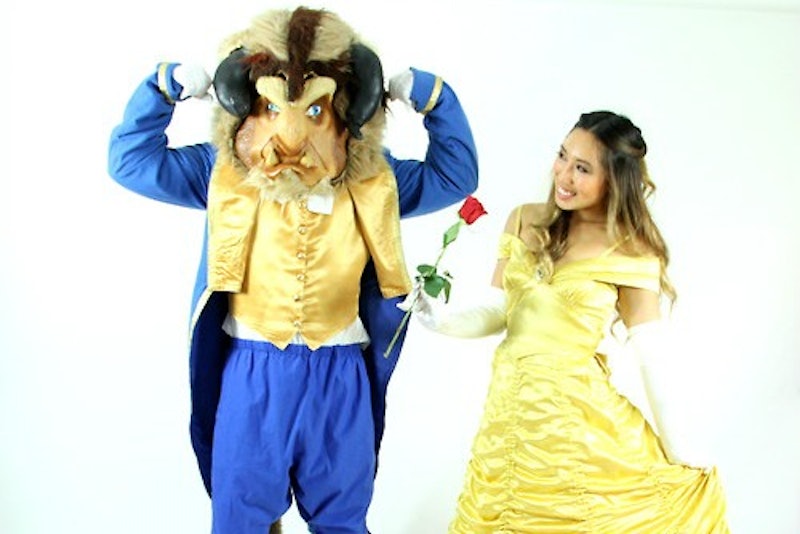 As a theatre director and former stage manager, I have a deep and abiding love for good design elements—especially if you’re working on a shoestring budget. I also, however, have a deep and abiding love for absolutely terrible design elements, which usually become all the more obvious when you’re working on the aforementioned shoestring budget. Case in point: My new favorite Tumblr, Low Budget-Beasts. (P.S. Sorry. It looks like I lied the other day when I said Saving Room for Cats was the only Tumblr I'd ever need. Let's face it: I find a new favorite Tumblr every freakin' day.)

A self-proclaimed “tribute to all the low-budget Beast costumes featured in productions of Beauty and the Beast,” Low-Budget Beasts is one of the funniest goddamn Tumblrs I’ve ever seen. I say that with absolutely all the love in my tiny, shrunken heart, by the way; as the page’s disclaimer says, “[it’s] not meant to offend or embarrass.” The disclaimer continues, “It was created exclusively for comedic purposes,” a goal at which it definitely excels.

How did this whole magnificent disaster start? Like so many other things, we can blame the Google search algorithm. Said site creator Noelle Marion to BuzzFeed, “It all started years ago when my college roommate and I somehow stumbled upon a Google Image search of the Beast costumes. Flash-forward to about a week ago, I was thinking about Beauty and the Beast and I recalled that mecca of ‘low-budget beasts’ online,” she continued. “I did a quick search to be sure they were still in existence and the results exceeded my expectations.” There’s nothing quite like Disney gone bad, am I right?

Take, for instance, this one:

“Some fine work was put into this low-budget Beast ensemble- complete with a chin resembling testicles and a Belle I’m not convinced isn’t a cardboard cutout,” Noelle wrote. Accurate! I wonder if those chin testicles are actually Neuticles?

Then there’s this one, who looks kind of like a reject from Where the Wild Things Are. It’s true that acting with masks is a whole different ballgame than acting without them, but, well… let’s just say that leaving the full face of your Beast totally uncovered doesn’t really do much for my suspension of disbelief:

Gee, Belle sure looks thrilled to spend the rest of her life with this one, doesn’t she?:

You’ll never guess what this next costume is made of. No, really—you will never, in a million years, guess. Give up? It’s…

Cat fur. Cat fur. “My best friend and I decided to reenact a few scenes from Beauty and the Beast,” submitter Kira wrote. “With a budget of zero, we used an old wig for the beard and cat fur from my mom’s cats. The fur got in my eyes… it was bad.” To which I can say only this:

And in case you’re wondering, the site really is all in good fun; said Noelle to BuzzFeed, “Even the Beast from the original cartoon makes me laugh … There’s just something unbearably funny about him bumbling around and even more so when you force a live actor to portray him.” Truth.

Low-Budget Beasts, by the way, isn’t the only Tumblr out there dedicated to sadly misguided theatre productions; SHOW NUFF: Terrible PR Pictures from the Theatre of the United States has also been making the rounds lately, featuring everything from awful costumes to unfortunate production stills. Bad showmance, anybody?