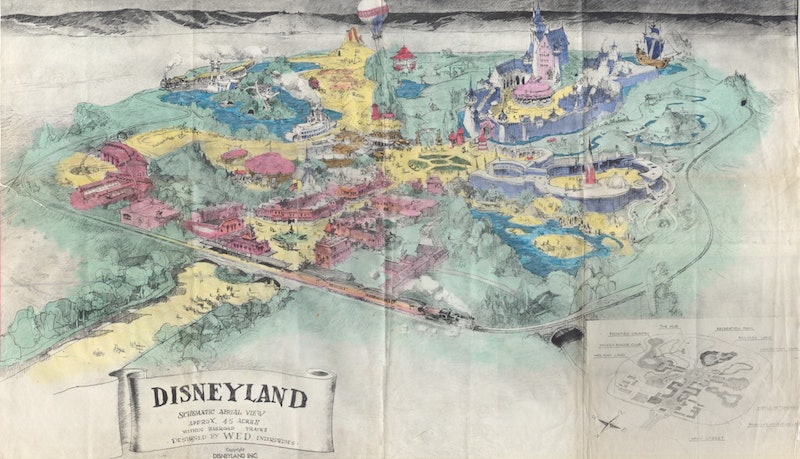 It's almost hard to imagine a world before Disneyland – the park may have changed some since the early days, but that famous "We're going to Disneyland!" refrain seems as immortal as a passage from the declaration of independence. But newly released documents from the days when Walt Disney was still in the planning stages of his famous parks make it clear that there was, indeed, a time when Disneyland was nothing but an idea in Walt Disney's famously active imagination. Of course, it seems that part of his original plan was to offer real, live ponies for sale, so it seems he didn't quite make everything about that idea a reality.

Walt Disney first came up with the idea for Disneyland in the 1950s, but his brother Roy, who controlled the business end of things, was skeptical of the idea. That didn't stop Walt from fleshing out ideas, and in 1953 with the help of Herb Ryman, a long-time Disney animator, he created a brochure to show to banks who might supply funding. The brochure, which ultimately failed to sway any of the New York bankers Walt and Ryman approached, was bought at auction last year by Glenn Beck, which just seems cosmically unfair. Especially since he's stated he will not share it with the public in any way.

Fortunately for us, an anonymous benefactor has given the web magazine Boing Boing scans of the original documents, meaning the public can enjoy them anyway. Take that, Glenn Beck.

The scans reveal that Walt Disney's original vision included a lot of features of Disneyland today, including Main Street, USA, Tomorrowland, and Adventureland. Though there was also that part where he wanted to sell ponies, along with a few other strange ideas that Roy probably quashed once he finally came around on the project and secured funding. Like, for instance, Lilliputian land, a section of the park dedicated to nine-inch tall singing mechanical people. As if the Small World ride wasn't enough of a burden for easily irritated parents.

Overall, though, the biggest stand out was Walt's ambitiously large scale, sentimental vision of what the park should be – something both Disneyland and Disney World have probably struggled under ever since. Walt writes that Disneyland will be...

... a place for parents and children to share pleasant times in one another's company; a place for teachers and pupils to understand greater ways of understanding and education. Here the older generation can capture the nostalgia of days gone by, and the younger generation can savor the challenge of the future. ... Disneyland will be dedicated to the ideals, the dreams and hard facts that have created America.

Not the easiest mission statement to live up to. I think I now understand how Disneyland got to be one of those places where you are so aware that you are supposed to be happy that it's hard to actually feel happiness.

Regardless, that was Walt Disney's vision, and it's shaped our whole world – it's a Small World, after all. And this is how it all started.