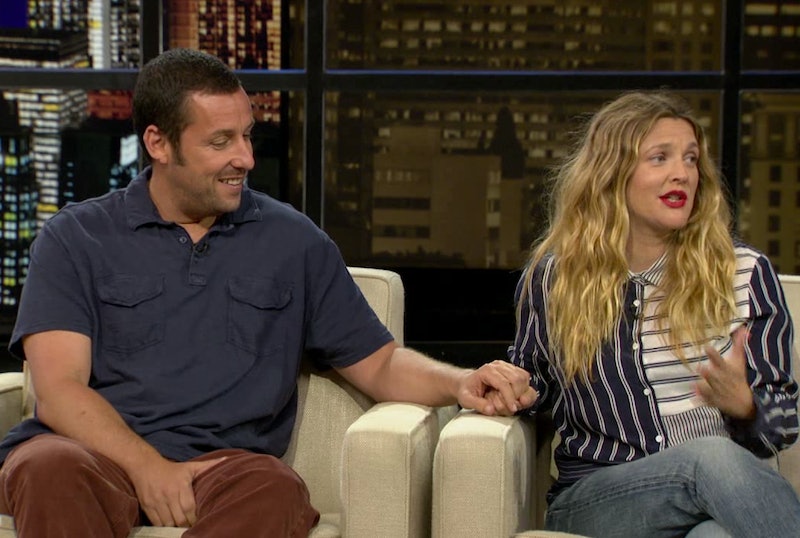 Ever since The Wedding Singer, fans have been praying for Blended stars Drew Barrymore and Adam Sandler to get together and carry each other around when their arthritis is bad. Now, however, it's clear that the most we can hope for is an on-screen romance. Not only did Sandler fail to relinquish the remote in Click, but there is no evidence that he did dishes in the kitchen sink or put Barrymore to bed when she'd had too much to drink. The only way they can grow old together, it seems, is by continuing to make romantic films until the flesh falls from their bones.

Chelsea Handler recently conducted an interview with the two stars, and while they were holding hands on set, they mostly dished about staying with their families in South Africa and closing their windows to avoid monkey attacks. (Barrymore is currently married to Will Kopelman, while Sandler is spoused up with Jackie Sandler). When Handler asked them if they'd ever dated, the response was a firm negative. The two Blended stars almost stumbled over themselves explaining how they avoided the great honeypot that is co-starring in a romantic film with another attractive human being. (See Mr. and Mrs. Smith, Twilight, and That 70's Show for the opposite results.)

Barrymore asserts that there was, "Not even like, as we say in The Wedding Singer, 'church tongue,'" while Sandler adds, "We always hung out, always had a good time." Apparently, their platonic friendship is the recipe for prolonged romantic filmmaking together, as emotional baggage is nowhere in sight. I am happy for them and their rebuttal of When Harry Met Sally, because young men and women all over the world need role models for how to be friends with someone you've kissed on-screen without making a lifetime commitment. As for the clip with Chelsea Handler, watch it below!