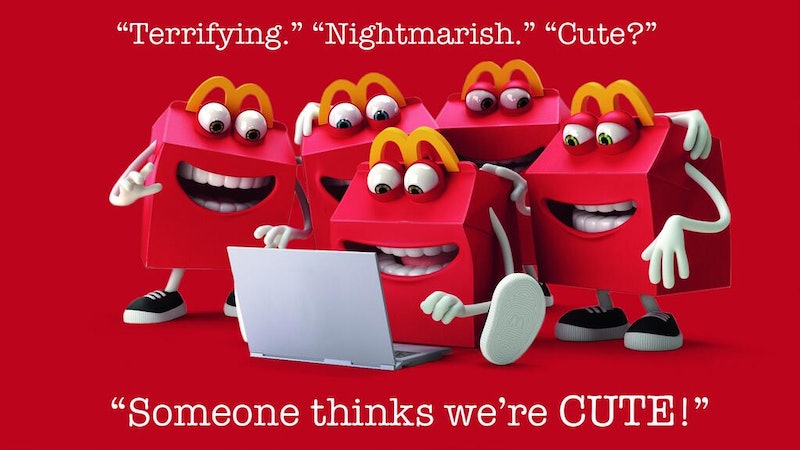 When McDonald’s unleashed their new Happy Meal mascot, the not-so-creatively named Happy, on the world last week, pretty much the entire known universe came to the same conclusion: “OMG WHAT IS THAT GET IT AWAY FROM ME.” Called everything from “creepy” to “scary,” the anthropomorphic red box with bulging eyes, stretchy limbs, and — most terrifyingly — a mouth full of sinister teeth was immediately condemned by the adult world as a “What were you thinking, McDonald’s?!” disaster. But the question remained as to what kids think of Happy… until now. And they are just as freaked out as the rest of us.

Grub Street recently presented a bunch of young’uns — Happy’s target demographic — with the new mascot, and the results are… well… enough to make you wonder whether McDonald’s thought to test their horrifying creation on any real, live children before rolling him out. Response range for a puzzled and surprised, “What the heck is that?!” to a horrified “AAAAAAAAGH!”, followed by the child in question burying her head in her arms. They, too, think he’s “weird” and “creepy”; the creature’s hyper-realistic mouth and, curiously, lack of a nose are also determined to be disturbing. As one little girl put it, “I don’t how that makes their food better, but I guess that’s what they think.”

But there’s good news, too: The kids have some suggestions for McDonald’s about how to make Happy significantly less frightening. How’s about giving him a regular smile, minus the “I’M GOING TO EAT YOU!” teeth? Or even—gasp!—a nose? Food for thought, McDonald’s (see what we did there?). Just sayin’.

Interestingly, though, Happy is only ranked fourth in a current Consumerist poll asking what readers think the most terrifying fast food mascot of all time is; the old Ronald McDonald still nabs the top spot, with the Quiznos Sponge Monkey and the Burger King in the second and third slots, respectively. Bizarre as it may sound, I actually have a soft spot for the Sponge Monkeys, who debuted on television in 2004; also referred to as “Spongmonkeys,” they originally starred in one of the strangest little animations ever to hit the Internet. Maybe it’s just because it was finals season my freshman year in college the first time I saw “We Like the Moon,” but it still sends me into paroxysms of laughter every time I watch it.

Maybe that’s just me, though. Who gets your vote for Most Terrifying Fast Food Mascot of All Time?