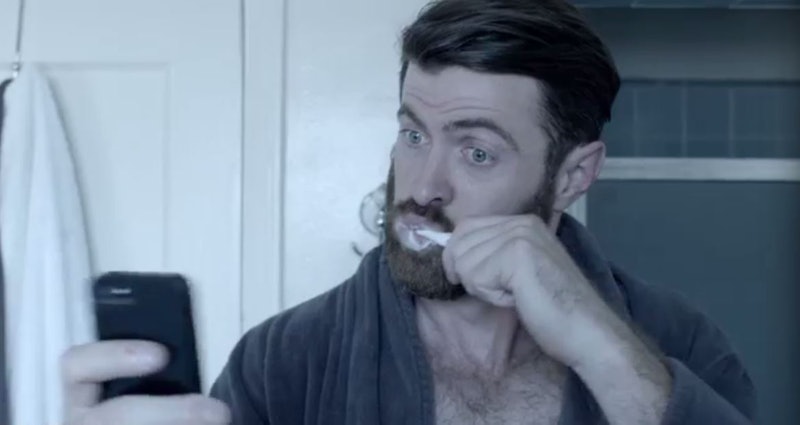 Tinder’s already got its own web series, so it was really only a matter of time before it got its own musical, right? As always, Funny or Die is happy to deliver — and deliver they do with “Tinder! The Musical.” Written by John Fulton, who is both a musician and (somewhat surprisingly) the host of Animal Planet’s Must Love Cats, directed by John Kaiser, and starring Fulton and actor Adam Marcinowski, Funny or Die’s musical lambast is hilarious — and it also serves as a powerful reminder of exactly why I don’t use Tinder.

I imagine the script going a little something like this: Lights up on BRO NUMBER ONE, playing and singing a sweet yet contrived love song—the kind of guy who you probably won’t find on Tinder. Enter BRO NUMBER TWO, fresh from his latest date—which, it turns out, wasn’t actually a date. As he says, “Who goes on dates anymore? Tinder, bro!” Then, when asked if he really gets laid using that app, Bro Number Two launches into a musical number of epic, Broadway proportions!... Actually, scratch that; it’s more like an off-Broadway, shoestring budget kind of number. But hey, at least the production values are infinitely better than all those Low-Budget Beasts, right?

Granted, I’m not playing the field at the moment, so duh, obviously I wouldn’t be on Tinder anyway; but even if I were actively dating, Tinder probably wouldn’t be my app of choice. It’s not that I have a problem with random hookups — they can be a lot of fun, and as I’ve said before, I am a firm believer in the Walk of Awesome over the Walk of Shame — but there’s something about an app that’s designed to facilitate hookups that makes me feel all kinds of weird obligations. I mean, if I swipe right on someone and they swipe right on me, is it absolutely expected that a hookup will happen if we met IRL? Too much pressure, man. At the same time, though, I realize other people probably feel the same way about apps and sites that are geared towards facilitating relationships, too, so, y’know. To each his or her own and all that.

Also, for some reason, “Tinder! The Musical” kind of reminds me of Seth McFarlane’s infamous “We Saw Your Boobs” number from the 2013 Oscars, but I really couldn’t tell you why. Maybe it’s the frank discussion of personal anatomy in the context of a cheery musical theatre number. Who knows. In any event, though, “Tinder! The Musical” is far from the only Tinder video parody out there; The Recapp has thoughtfully put together a roundup of some of the funniest ones out there, so check it out if you want to spend your Memorial Day watching more of ‘em. Swipe wisely, my friends!

Image: Tinder! The Musical/Funny or Die

More like this
Are Sagittarius & Capricorn Compatible In A Relationship? Astrologers Weigh In
By Kristine Fellizar
The 10 Memes That Defined 2022
By Alexis Morillo
This AI Filter Shows How You’d Look In Different Time Periods
By Alexis Morillo
65 Funny Dares You Can Send Your Friends Over Text
By Siena Gagliano
Get Even More From Bustle — Sign Up For The Newsletter