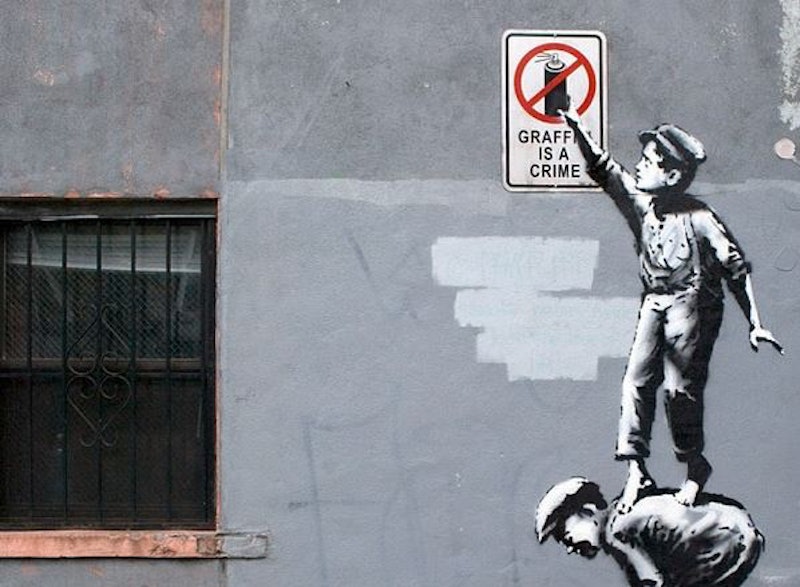 Back in October of 2013, the mysterious British street artist Banksy arrived in New York City, taking on the role of the city’s Artist in Residence — a title which, of course, doesn’t actually exist. Over course of the next month, Banksy created a new piece of art every day, a stunt that would net him the Webby Person of the Year Award. Naturally, the artist was a no-show at the awards ceremony last week — this is Banksy we’re talking about here — but Patton Oswalt accepted the award for him; he also posted a video on YouTube yesterday that sums up his “residency” in just under three minutes.

With pieces ranging from ambitious art installations to his trademark graffiti, Banksy did everything from bringing a quiet, calming landscape to the madness of the city to making kids cry with a truck full of terrifying stuffed animals (check 'em all out here). The NYPD, naturally, hand their hands full trying to track him down; but as always, they failed. The whole thing looks pretty wild; my only regret is not having been able to see any of the pieces myself. Of course Banksy would arrive in town after I’d just moved out, right?

However, this isn’t the only time Banksy has ever been to New York; back in 2005, he put up a bunch of pieces in some of the city’s most prestigious museums. The New York Times recently did some digging to find out what happened to these pieces, and apparently most of them are alive and well and in storage. Said Brooklyn Museum spokeswoman Sally Williams about a painting of a Colonial-era officer holding a can of spray paint with antiwar symbols in the background, “We have it in our custody, but as it was never offered to us for inclusion in our collection, we have not accessioned it.” The museum still has the painting because “we don’t know how to return it to its rightful owner” — something which I find laugh-out-loud funny. Anyone else? No? Just me? Okay then.

Meanwhile, a similar fate befell a painting of a can of cream-of-tomato soup Banksy left in an elevator lobby at the Museum of Modern Art. “The work in question was taken down as soon as it was identified, and in keeping with our policy, was held in Security and available to be picked up by the artist,” said MoMA spokeswoman Margaret Doyle. “I don’t believe he ever retrieved it.”

You know, I can’t wait to find out what happens decades, or even centuries, down the line when these pieces, having been forgotten, are rediscovered and pulled out of storage. Will he still be as well-known then as he is today? Will he have grown into a legend, or even a full-on movement? Or will his street art have been forgotten, a product of his time, but no longer relevant for contemporary audiences? Time will tell. Now if only I could finish up that time machine I’ve been working on so I could go into the future to see how it turns out for myself…