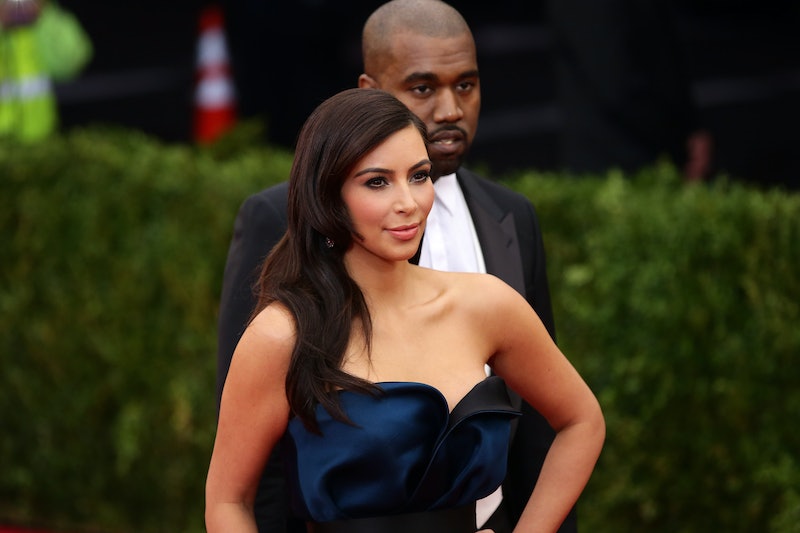 Well, it finally happened. The wedding of the century, plagued for weeks by conflicting news reports about everything from its locations to its guest list, has come and gone. Although details of Kim Kardashian and Kanye West's wedding are still hazy and open to speculation, one thing is for certain: we are now living in the Age of Kimye. That's why, when E! Online published the first photographs of newlywed Kimye, they more or less broke the Internet.

Admittedly, it doesn't take much to break the Internet these days. A complete and total meltdown is just how the Internet tends to handle shocking news. However, Kim Kardashian and Kanye had the most highly anticipated wedding since Prince William and Kate Middleton's and getting any information about it up to this point was like trying to squeeze water from a stone. However, the first photos of the newlyweds were like whole news stories unto themselves. A picture's worth a thousand words after all and each photo tells us a lot more about the ceremony than a simple transcript of everything that happened could have.

Three of the pictures are from the wedding itself, giving us our first good look at Kardashian's Givenchy wedding dress, and the last two are black and white photos, one of which features the best set of leather jackets I have ever seen. In fact, throughout all of the pictures, something in the background of Kimye steals focus from the happy couple.

We thought that he was just raising the bar on bouquet standards when Kanye gave Kardashian a wall of flowers for mother's day. As it turns out, he was really giving us the gift of a small preview of his wedding day. Well played, Kanye. Well played.

If you look very closely at the back of this picture, North West can be seen in the background watching her parents officially walk off as man and wife. You can almost hear her concentrating very hard on not ruining this moment by crying. Or on the mega-huge nap she's totally going to take later. Or both.

For me, Kardashian's dress looks its best from the back. The shape of it makes her look like a mermaid, but it's really the train that's stealing the show. Never has a doily-like train looked so good. And don't even get me started on the veil. Kardashian fills out the dress very nicely, but that train.

Who knew that Kardashian and Kanye could look that good in black and white? All right, so we've seen them in black and white photographs before, but the coloring and lighting in this one is truly top notch. It makes the two of them look both iconic and at peace in the best kind of way.

Anytime I think of Kimye, I'm going to think of this photograph. Clearly driving away in a car with a sign on the back and tin cans strung to the bumper was just too boring for this spotlight couple. Matching biker jackets that say JUST MARRIED? Um, is that a trend we can get started right now, please and thank you?