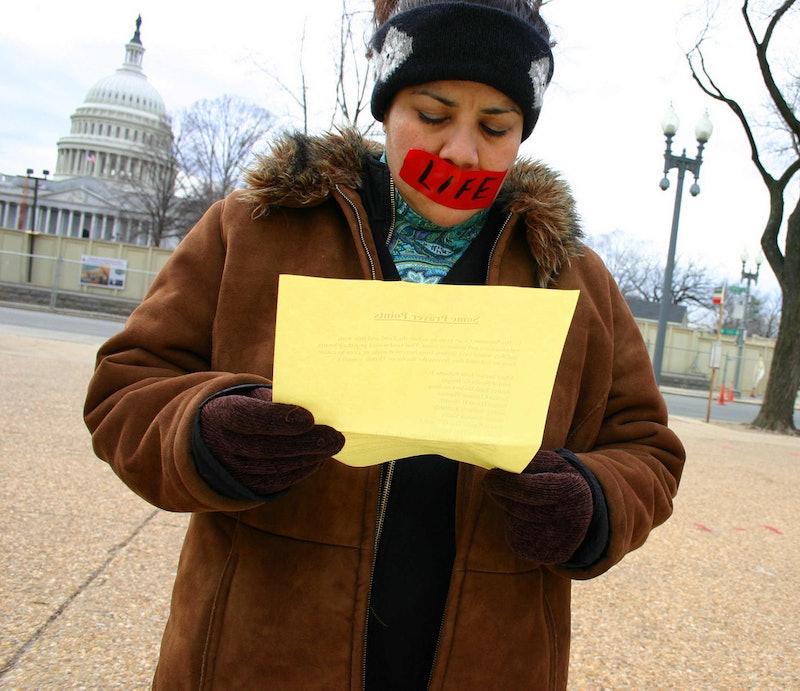 Everybody saw the fight for abortion rights play out in Texas in 2013, but don’t be fooled: Anti-abortion groups are attempting to obliterate abortion access all across the country. Roe v. Wade firmly established a woman’s constitutional right to have an abortion, and so Republican state legislatures have attacked abortion access through other means, including targeted closures of abortion clinics, onerous regulatory burdens on abortion doctors, and mandatory waiting periods for women seeking abortions.

It’s been an unfortunately busy month in the fight for abortion access, and some states have it worse than others. Here’s what you need to know about what's going on in some of the most anti-abortion states in the country.

The Bayou State only has five abortion clinics, but to the anti-abortionists in the state, that’s still five too many. Last Wednesday, the Louisiana House of Representatives passed a bill that requires doctors who perform abortions to obtain admitting privileges at a hospital within 30 miles of the abortion clinic. Most clinics in the state say they can’t meet that requirement, and as such, the bill could shutter as many as four of the state’s five clinics if and when it becomes law.

The same legislation also mandates a 24-hour waiting period between consultations on medical abortions and the actual administration of the drug. There’s zero medical reason for this; the goal is to require women seeking abortions to make two separate trips out to a clinic, which can be difficult if not impossible when the nearest clinic is hours away.

Governor Bobby Jindal, widely believed to be gearing up for a presidential bid in 2016, supports the bill and has said he’ll sign it.

Alabama also recently passed a law requiring doctors who perform abortions to obtain admitting privileges; Planned Parenthood and other groups promptly sued the state, and the law is now in federal court.

The admitting privileges requirement is a particularly devious way of chipping away at Roe v. Wade, because on its face, it sounds so reasonable. After all, why shouldn’t abortion clinics have the option to admit patients to nearby hospitals? The thing is, they already do.

If an abortion results in complications, the patient can and will be admitted to a nearby emergency room no matter what; admitting privileges are just another bureaucratic hoop to jump through. What’s more, only around one percent of abortions even require emergency care (given that, you know, they’re one of the safest medical procedures in existence).

Lastly, the reason so many physicians who perform abortions are having trouble obtaining admitting privileges is that hospitals often won’t grant them to doctors who don’t live within 30 miles. But none of Alabama’s abortion doctors live in the state for fear of harassment (or murder, as with George Tiller in Kansas) by anti-abortionists. They fly in from out of state, and as such, aren’t eligible for admitting privileges (which again, serve no medical purpose, and are opposed by the American Medical Association).

In Missouri, women seeking abortions already have to wait 24 hours between their initial medical consultations and the operation itself. If a bill passed by the state legislature in May becomes law, that waiting period will triple, making Missouri the third state in the country, along with South Dakota and Utah, to impose a 72-hour waiting period for abortions. The legislation doesn’t contain any exemptions for rape or incest.

The bill’s Republican supporters have offered some particularly condescending justification for the legislation. Their main claim is that women, if left to their own devices, will rush into a decision without thinking it through.

“We are not denying the mother her rights, but simply asking her to give more thought before making a decision that she may later regret,” said Rep. Kevin Elmer.

Governor Jay Nixon hasn’t said whether he’ll sign the bill or not, but he did call it an “extreme proposal,” giving pro-choice activists in the state some hope that he’ll veto it.

Mississippi is frequently sued for its incremental attempts to restrict abortion access. In April, Governor Phil Bryant signed a bill that bans abortions after 20 weeks — not from conception, but from the start of the woman’s last menstrual cycle. That can happen up to two weeks before fertilization, so this is effectively an 18 week ban.

But this isn’t the law that landed the state in court — that would be the admitting privileges law, which is similar to those in other states. The difference is that Mississippi has only one abortion clinic, and none of the 13 regional hospitals have been willing to grant it admitting privileges. In short, then, this law would outlaw abortion in the state of Mississippi.

The law is currently in a peculiar bit of legal limbo; while a judge allowed it to nominally take effect, he also blocked the closure of the Jackson Women’s Health Organization. A federal appeals court is currently reviewing the law.

By leaps and bounds the most restrictive abortion law in the country, North Dakota’s fetal heartbeat law bans abortions after six weeks. It was signed by Governor Jack Dalrymple in 2013, temporarily blocked by a federal judge before it could take effect, and then, in April, struck down completely by that same judge, who called the law “invalid and unconstitutional.”

Nevertheless, North Dakota’s Attorney General decided to appeal the ruling — and if the case makes its way to the Supreme Court, it could pose an existential threat to abortion access throughout the country. That’s because state attorneys, in crafting their legal case, aren’t merely defending the fetal heartbeat law; they’re defending it on the grounds that the very “underpinnings” of Roe v. Wade are no longer valid.

For example, the state is advancing the rather outlandish argument that fetal viability begins not at 22-24 weeks, as is commonly accepted, but at conception, because newly-created embryos can survive in a test tube for two to six days prior to in vitro fertilization.

It’s an absurd way to define “viability,” and a lower court rejected it, but that doesn’t matter. What matters is that the Supreme Court may very well end up considering this argument.

When signing the law, Dalrymple made his priorities clear. While he admitted that “the likelihood of this measure surviving a court challenge remains in question,” he nonetheless defended it as “a legitimate attempt by a state legislature to discover the boundaries of Roe v. Wade.”

Stay tuned for the latest updates on the state of your right to choose.