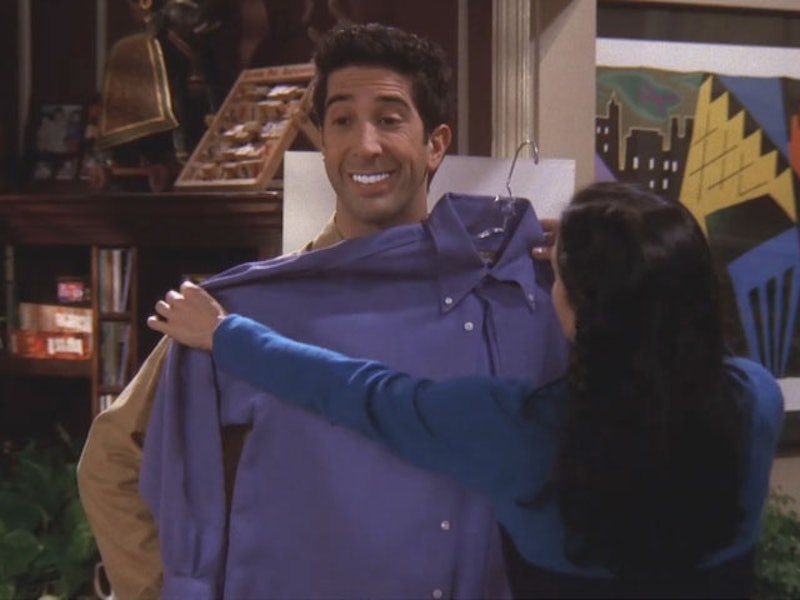 When the news surfaced that Friends star David Schwimmer helped assist the NYPD in solving a violent crime that unfolded in his East Village apartment building, is it wrong that one of our initial reactions was "Ross caaaaaaaaaaan't"? Sure, David Schwimmer the actor, may be more than willing to comply to help out with problems in his building (no matter how his neighbors may feel about him), but we could never imagine that his famous character Ross Geller helping solve a case, let alone one that involves a stabbing and prostitution. Heck, Ross wouldn't even chip in for Howard the handyman's party. He's definitely not going to get involved here. (Well unless, of course, he uses his powers of Unagi to stop a crime before it even happened.)

Now Ross had more dweeby moments than we could even count during the ten-season run of Friends , but in honor of David Schwimmer's very non-dweeby act of social responsibility, we've somehow narrowed it down to 17. Ross may have been a good father, and a gifted paleontologist, and an even better friend, but you can't deny that the guy was a supreme dweeb. Which is exactly why he was the Friend we loved to hate the most.

The One Where He Taught Rachel and Phoebe About "Unagi"

Self-defense was, in the eyes of Ross, not something that could be taught. Instead, you had to have a crystal clear awareness of everything around you, better known as "Unagi." (Side effects may include a craving for sushi.) Not only was Ross so wrong, but he was just so certain of himself in spite of it. When Rachel and Phoebe scared the hell out of him in his apartment — and then later tackled him when he tried to scare them at their place — it was so tremendously satisfying to watch.

The One Where Ross Bought Leather Pants to Look Cool

Chandler may not have been able to make fun of Ross for buying leather pants, but we sure can. We don't know what's dweebier, the fact that he thought he could pull off wearing leather pants in the first place ("I could be a cowboy!") or that he couldn't get them back on during a date and had to improvise and make a pair of paste pants.

The One Where He Shared His "Craft" With the Gang

The only thing worse than Ross playing the bagpipes, is Ross playing his own original tunes on the keyboard. They were awful and he really thought he was creating art. He did however have one fan: Phoebe.

That poor, poor pizza delivery girl. Having to endure Ross talking to her about gas and little boys' haircuts in a "sexy" voice. It's amazing Ross ever hooked up with anyone ever.

The One Where He Dressed Up as 'Spudnik' for Halloween

Sure, the Holiday Armadillo was dweeby in its own right, but that was all done for his son Ben. He created this lame Halloween monstrosity all on his own and was proud of a costume that made him look like doody.

Ross has plenty of lame hand gestures, but nothing is more irritating or dweeby than his symbol to ask for things to be quieter. Better known as: "Bye-bye little puppet Joey hand?"

The One Where He Dated Janice For a Hot Minute

Ross freaked out when Joey dated Rachel, but he apparently had no issue with dating Chandler's ex Janice. Ross was so annoying during their brief courtship that even Janice couldn't stand him. That tells you everything you need to know about Ross.

The One Where He Whitened His Teeth to Impress a Date

In the words of Phoebe: "Demon!" Even worse is that Ross never learns from his beauty mishaps. Remember when he tried to get a tan? For a scientist he sure can't count Mississippily.

The One Where He Came Up With a Fake British Accent

In order to shake first-day jitters, Ross invented a horrendous British accent while speaking to his class. (He should have just stuck with his velociraptor imitations.) Even worse than his English alter ego was how upset he got when Monica and Rachel, rightly, teased him about it.

Even worse, he raised his own hand when Phoebe asked "Who here likes Ross?"

Sure, his "Pivot!" is his best cry ever on Friends , but getting a couch up a flight of stairs is legitimately difficult. Getting your ridiculous, unnecessary sports car out of a parking spot is embarrassing. Especially when it requires the assistance of all of your friends.

The One With His Fashion Statements in General

You'd think his high school and college threads would be embarrassing enough as is, but no. He made some seriously lame fashion choices well into his thirties.

The One Where He Defended His Inexcusable Actions

Ross slept with someone else roughly three hours after he and Rachel decided to take a "break" and then send the wrong person's name (in this case, Rachel) during his wedding to Emily. Those things are bad in and of themselves, but what's worse is her never blames himself. He always has some dweeby excuse like, say, "We were on a break!"

The One Where He Came Up With the Divorce Force

Even worse than Ross's newfound appreciation of life, is that he thought his friend was taking an invisible bullet for him. No, it was for a meatball sub. Sorry, Ross.

Get it together, man. You reacted to good news the same way you would if someone stole your turkey sandwich with the moist-maker in the middle.

The One Where Any Time Ross Tried to Play It Cool

Ross knows plenty about dinosaurs, but the man knows nothing about playing it cool in any kind of situation.