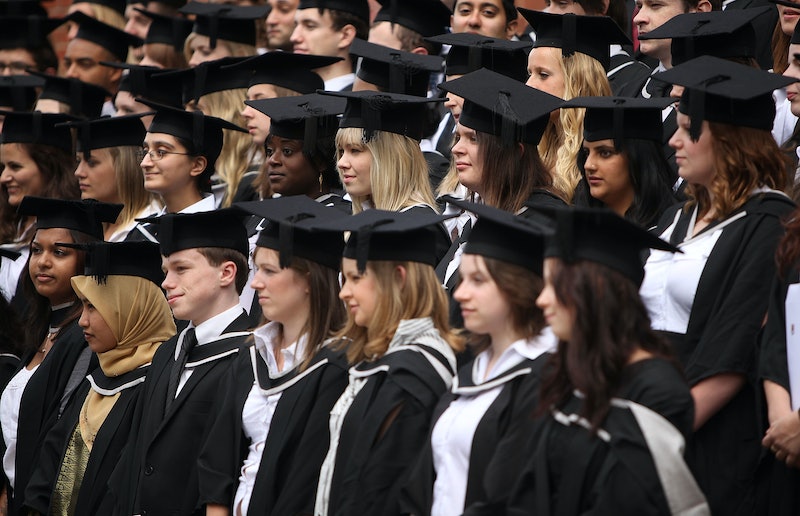 There are plenty of things to look forward to after graduation. Sleeping in your old room at your parent’s house for two straight weeks and waking only for carbs will never feel this good again. And accepting that the less-than-ideal job you just got is nothing more than a stepping stone for your impending world domination will be so freeing.

Still, there is lots to sort out. Did you just waste the last four years of your life with the wrong major? How long does it actually take for one to "earn their stripes?" What is this thing called cooking you speak of?

With all that to ponder over, you’ll need to be counting your blessings. And that means thanking your now-in-debt stars that there are some people who you simply won't have to deal with again now that you've graduated. Sure, these types will exist in the real world, but at least you won't be as stuck with them. Now more than ever it’s important that you take the time to perform a social media cleanse.

The eight types of people listed below made college memorable and hell all at once, and all by doing little more than being themselves. They have served their purpose and must now be released into the world to mate with their kind. Here's who we won't miss.

Contrary to popular belief, the Debby Downer from college isn’t the girl that declined every party invite. She’s the one who went to every party, fell in love with a different guy at each one, and then proceeded to monopolize your time and comfort food while she bellyached over her latest heartbreak. You never got to be happy around her. When her latest breakdown wasn’t in progress, you spent your free time annoyed at her inability to recognize why she keeps circling this particular ring of hell. Ask sweet baby Jesus to take the wheel and say your last goodbyes.

By now you’ve run out of ways to tell this person that being a sapiosexual and wanting to be friends with him or her are two different things. Just enjoy never having to interact with them again, and the fact that if should you ever randomly run into them again, at least they will probably be single.

OK, maybe we will miss this friend. But you won’t achieve most of those things on your impossibly long list of post-college goals if you continue to be besties with your plug and this bud. When you catch up with this friend on Facebook and realize that they’re in the sixth year of their seven-year-undergrad plan and still don’t have a major you’ll realize you made the right choice.

Before them, you thought you were a rebel. But their blatant disregard for the established and agreed-upon roommate rules proved that they and their kind were the true dissidents. Be thankful that you survived without your life becoming a Lifetime movie special. No more awkward run-ins in the hallway, weird noises throughout the night, or stolen food. Gone are the days you spent counting the seconds you were the object of their piercing stare.

You thought they were going to be your friend forever and not the soul-sucking backstabbing stain everyone else tried to warn you about. But thankfully, after graduation you’ll no longer have to stare into the face of the one who betrayed you. Run far and run fast — these have a tendency to return to the scene of the crime to gloat and feast on remains.

This person spent most days creating witty one-liners for LinkedIn instead of actually attending class. They were constantly updating their profile and made you feel bad about having less than 200 connections. Freshman year, they came in with business cards. Master of the productivity apps for the unproductive, they frustrated you to no end because they were passing classes without ever leaving Starbucks. Best to unfriend now.

They came to school in a creased and fitted pants suit even Hillary Clinton would envy. All business all the time, they had little time for shenanigans, or as we normal people would call it, fun. At first, you wanted to be like them, but realized early on there was very little time for breathing or sweatpants in their world. Their grades were always better, and you not-so-secretly wished to best them at least once. Mark this off your To-Do list — whether you accomplished it or not. All that insecurity they helped create will fuel you for years to come as they march ever-closer to a nervous breakdown.

Whoever he or she is, take comfort in the fact that they can embarrass you no longer. Unless there is video. (Please don’t let there be video.) No more running into last weekend’s mistakes in the hallways. Store the memory; it’ll be useful in the future when you’re trying to prove to people you’re not a cog.

Best to forget this person's face and replace it with an attractive imaginary person, starved of douchebaggery. (Preferably with Ryan Gosling’s body type and moves like Jagger.) This is where those creative writing classes will come in handy.

Whatever you do — don’t look back.