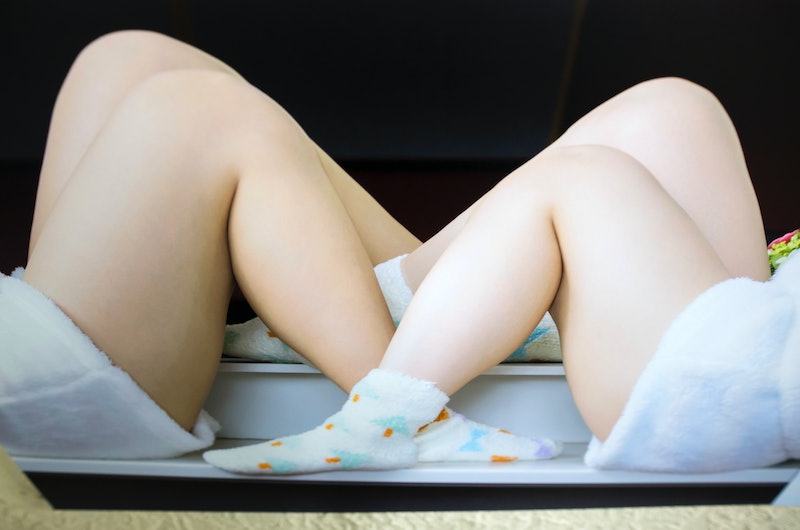 Nowadays, you can’t go anywhere without hearing the term “thigh gap.” It’s a cultural obsession that’s somehow spawned workouts, new laser therapies, and even more absurd levels of Photoshopping than usual. But have you ever wondered how such a seemingly arbitrary point on your body got to become such a coveted standard of beauty? A hilarious new College Humor video is aiming to answer that exact question by delving into the mystery of the female thigh gap.

Presented in the form of a History Channel documentary, the parody asks “experts” to figure out the origin of the ridiculous thigh-gap trend and answer questions about this “popular, stupid thing.” And what they found will surprise…exactly no one. Because guess what? BREAKING NEWS ALERT: there is no scientific explanation for our “mass cultural delusion.” Other than maybe being a factor of attraction for some shallow, misogynistic men ogling women’s bodies (as in “That butt! That thigh gap!”), there is literally no reason whatsoever as to why we’re all obsessed with female thighs. Shocking, I know.

While I don’t love how this video makes it seem as if thigh gap is a terrible thing altogether (some lucky ladies are born with it naturally and that is a-OK, people!), I still find this video pretty on-point overall. The issue isn’t the thigh gap itself, it’s the fact that the world has randomly decided that having one makes you The Fairest of Them All — which then makes everyone who doesn’t have one (aka most women) feel self-conscious.

My proposed solution? Watch this video and then let's all let go of this absurd obsession. It’s time to stop the madness!

More like this
Are Quality Time & Gift-Receiving Love Languages Compatible?
By Lexi Inks
The Differences Between Polyamory & Open Relationships
By Lexi Inks
The 19 Best Tweets & Memes About Bisexual Awareness Week
By Lexi Inks
These 4 Signs Are The Seductive Sirens Of The Zodiac
By Brittany Beringer
Get Even More From Bustle — Sign Up For The Newsletter