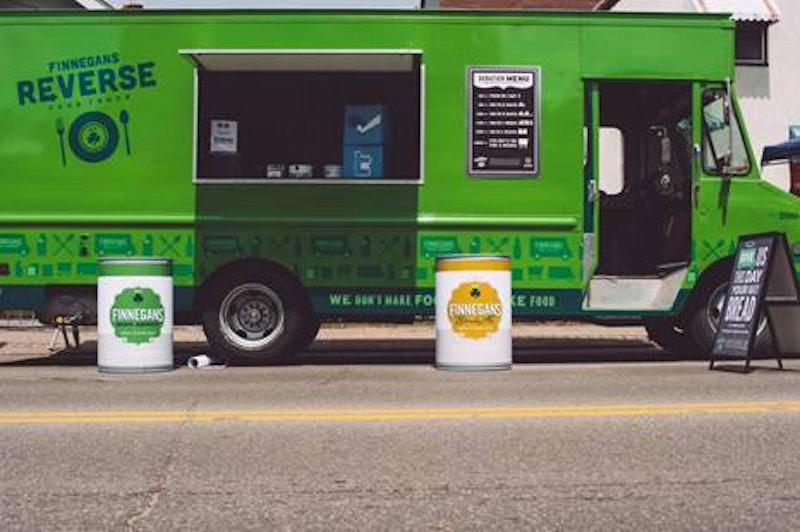 While other food trucks serve Nutella-filled Cronut holes and pot-infused grilled cheese sandwiches, Finnegans' “Reverse Food Truck” isn’t serving anything at all. According to NPR, the non-profit group is using the popular new business model to accept food donations in order to provide hunger relief. Kind of genius, right?

Finnegans, a Minnesota-based company dedicated to "turning beer into food," joined forces with Emergency Foodshelf Network to create the Reverse Food Truck. (Or, as organizer Angie Lee tells NPR, "A food drive in the most literal sense.") Jacquie Berglund, CEO and co-founder of Finnegans, explains in a blog post that the idea was conceived last year during a meeting with their marketing partner, Martin|Williams Ad Agency:

I couldn’t believe the genius of this idea and I confess here that the rest of the meeting was a bit of a blur…I was so excited that I could barely sit still and I left that meeting proclaiming that I would have a ‘Reverse Food Truck” purchased by the end of the week.

In contrast with their usual fundraising method of selling beer to provide food for the community, the idea reaches a different audience. Aside from its convenience to passersby, Lee tells NPR that customers (or should I say, donators) are pleasantly surprised by the truck:

They'll try and order a hamburger or a taco and we say no, we're actually taking food. And then they're like, oh my gosh, this is the coolest thing ever.

So here's how it works: the folks at Finnegans will post the Reverse Food Truck's location on Twitter and Foursquare. You can also summon it by contacting Finnegan Beer — for events, or just to have it in your community. From there, you can either hand in non-perishables or donate funds. If you're going to funds route, the Reverse Food Truck "menu" can help you determine how exactly how much to contribute — and it's just another amazing aspect of the venture:

ABC News reports that Finnegans has already raised $5,700 through the Reverse Food Truck, and intends to reach a goal of $50,000 by October. For more information or to donate from home, check out Finnegans.org.