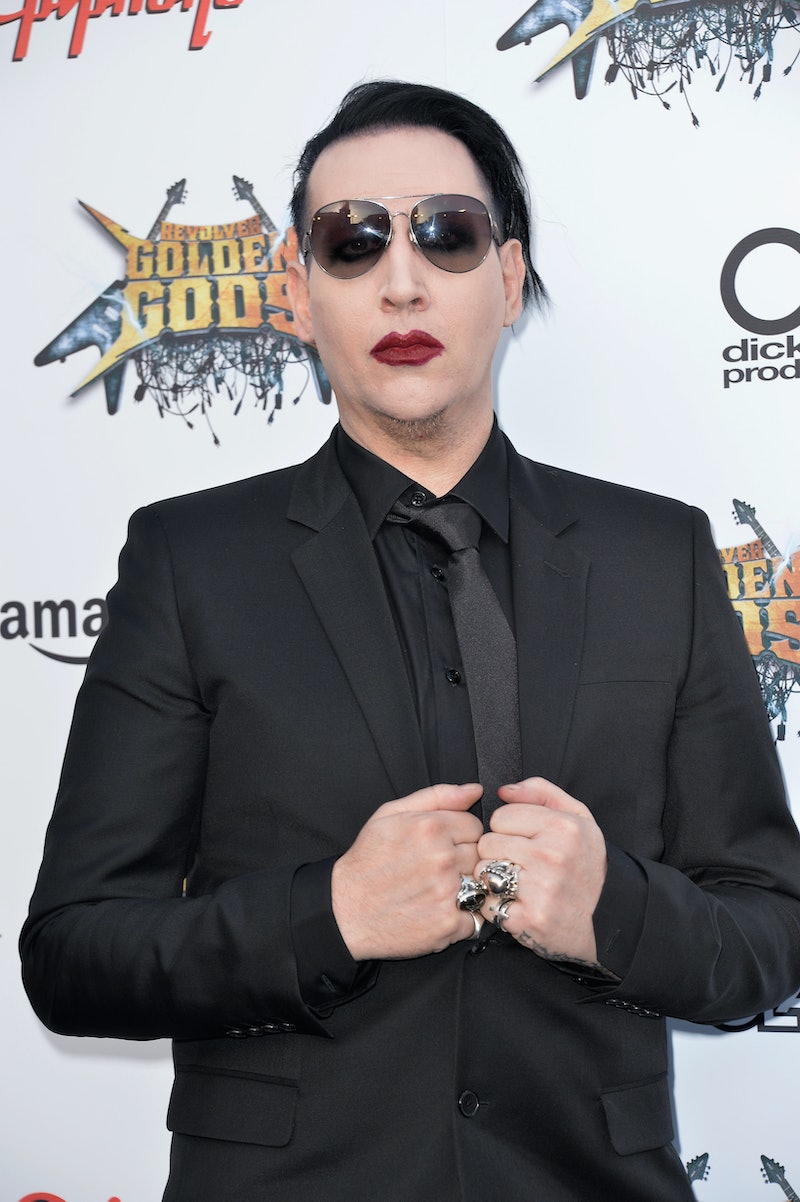 Well, this is interesting to say the least. It appears that the Antichrist Superstar himself has his sights set on television stardom. Marilyn Manson has been cast in FX's Sons of Anarchy 's final season in a recurring role. This announcement comes on the heels of Manson writing Salem 's theme song, his guest spot on Eastbound & Down , and his 2013 stint as The Shadow on ABC's Once Upon A Time . Is Manson looking to add "TV star" to his resumé? It sure seems like it.

According to the release from FX, Manson will play Ron Tully, a white supremacist and prison shot-caller that helps Jax's prison sentence go a little bit smoother. I mean, whatever SOA can do for the guy whose baby momma got stabbed in the head (to death, mind you) with a grilling fork. So how did this all go down? Manson just called up SOA boss Kurt Sutter and asked to be on the show. No, I'm not kidding. Apparently Dita von Teese's former husband and his father are both huge fans of the FX drama. Manson told E! about his decision to pursue a role in the series:

Sons has been such a big part of my life, as well as my father's. So I was determined to make him proud by being involved in what will probably be remembered as the most amazing piece of television cinema. After all, the very heart of SOA is about that relationship. So, now all I need is a motorcycle.

I'm honestly surprised that Manson doesn't own a motorcycle of his own already, considering he owns enough leather to clothe an army. But the sentiment behind this is all really sweet — who knew Manson had such a cute relationship with his dad? Either way, this is the fourth primetime connection Manson has scored this year and perhaps the largest. Are we looking at a future television star in the making? I mean, SOA is known for showing off some serious acting chops — Ron Tully will add credibility to Manson's already extensive resumé.

More like this
What’s New On Netflix: Lana Condor’s Ghostly Comedy & A Sexy Reality Series
By Arya Roshanian
Here’s Everything Coming To & Leaving Netflix In July
By Grace Wehniainen
Paramount+ Wants To Take Over Your Netflix
By Sophie McEvoy
Travis Barker & Kourney Kardashian’s Updates About His Health Are Promising
By Stephanie Topacio Long
Get Even More From Bustle — Sign Up For The Newsletter