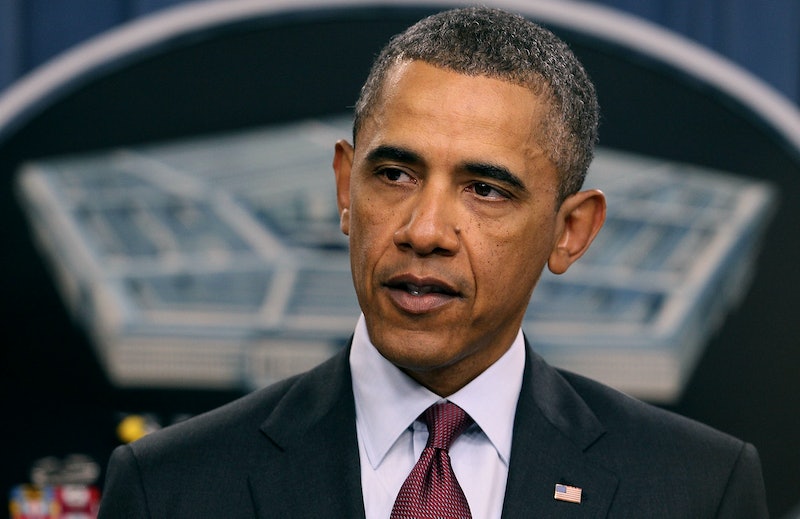 On Monday, the White House announced that President Obama will sign an executive order banning federal contractors from discriminating against LGBT workers, an important and long-delayed step toward equality in the American workplace. As a result, companies that do business with the federal government will no longer be able to fire or discriminate against employees due to their gender identity or sexual orientation — something that, up until this point, they were legally allowed to do. It’s a huge step in the direction of progress.

But it’s also a limited step. While the specifics of the executive order haven’t yet been unveiled, it will only affect federal contractors. What’s more, some people who agree with the measure nevertheless criticized Obama for waiting long to implement it.

So what does this executive order do? What doesn’t it do? And why does it matter? Here's what you need to know.

So What Exactly does This Change?

Currently, Title VII of the 1964 Civil Rights Act prohibits workplace discrimination based on race and gender — but not based on gender identity or sexual orientation. That means it’s perfectly legal for companies to fire employees simply because they’re LGBT. They don’t even have to come up with a cover story; they can openly state that they’re firing somebody solely because they’re trans, say, and there’s nothing the fired worker (or anyone else) can do about it.

But Do People Actually Get Fired For Being Gay?

Sadly, they sure do. When Rebecca Juro, a journalist and radio host, told her former boss that she planned to transition, the boss became “openly hostile” and fired her a couple of days later. Juro appealed to the New Jersey Division on Civil Rights, but it wasn’t of much help:

My former manager claimed that he had no idea what transition was and that he'd fired me for misbehavior. Of course, I knew this was a lie and asked for them to produce the disciplinary notices. They had none to show, because they didn't exist.

I told the hearing officer that it was clear that I had been terminated because this manager, and perhaps the company as well, had a problem with me transitioning from male to female...It was almost exactly a year later that I received notice from the Division on Civil Rights that my case had been closed and that no action would be taken because it had been determined that it wasn't in the state's interest to protect me from discrimination.

Or take the story of Bradley Kindrick, an openly gay 7-11 employee. During a late night shift in 2013, a man walked into the store, slammed him against a wall, and kissed him. When Kindrick told his supervisor about this, he was fired.

"I think that they made up a reason to let me go because they didn't want stuff like that happening at that store, and they felt like if they kept me, something like that would happen,” Kindrick said after the incident.

These are only two examples. There are many more on record — and even they only include workers who came forward publicly with their stories.

has no one tried to fix this until now?

In response to the lack of federal action, 21 states have passed laws that make LGBT-based discrimination illegal in the workplace. But in the other 29 states, LGBT workers are on their own, and enjoy no workplace protections at all.

There’s also the Employee Non-Discrimination Act (ENDA), a piece of legislation that would, once and for all, make discrimination based on gender identity and sexual orientation illegal everywhere in the country. ENDA has been proposed in every congressional session but one for the last 20 years, and it’s never passed both houses. The Senate made history by passing ENDA for the first time in 2013, but the GOP-controlled House let the legislation die without even taking it up.

so Will the order make that much of a difference?

The executive order that Obama plans to sign will ban this sort of discrimination — but only for companies that do business with the federal government. Such companies comprise around one fifth of the U.S. workforce; as a result of Obama’s order, an estimated 28 million American workers will now be shielded from discrimination based on sexual orientation or gender identity. Around 11 million of those workers live in states that don’t already offer their own protections, so this is a big deal.

But it’s also a limited step. Because the measure is an executive order approved solely by the president — and not, say, an act of Congress — it can only affect federal policy, it only affects businesses that do business with the federal government. Presidents have taken this route in the past: In 1965, Lyndon Johnson signed an executive order that banned federal contractors from discriminating based on race. Two years earlier, John F. Kennedy ordered federal agencies — which, important to note, are a different category than federal contractors — to ban gender-based discrimination within their ranks.

what can we expect next?

Some equality advocates are hoping that this order will compel the House of Representatives — specifically, Speaker John Boehner — to consider passing ENDA again. That seems like a rather faint possibility, given Boehner’s extreme reluctance to do anything that might upset conservative House Republicans; then again, the prospect of ENDA passing the Senate was also pretty dim in 2013, but it passed with 64 votes — including 10 Republicans.

There’s also a lawsuit that, depending on the outcome, could result in de facto implementation of ENDA-style protections without any Congressional action whatsoever. TerVeer vs. Billington involves the case of Peter TerVeer, who was fired from his job at the Library of Congress after his boss found out that he was gay. TerVeer is arguing in court that this is illegal under Title VII, even though Title VII doesn’t make any mention of sexual orientation.

It sounds like a stretch — but the lawsuit might have a fighting chance. In June, the federal judge overseeing the case issued a preliminary ruling that TerVeer did indeed “state a claim upon which relief can be granted.” In other words, if TerVeer’s account of events is accurate, he might win the lawsuit. This would set a precedent under which Title VII does protect LGBT workers from workplace discrimination — and that would more or less accomplish the same thing as ENDA.

Regardless of how the lawsuit turns out, a small but significant chunk of LGBT employees will enjoy a newfound peace of mind once Obama signs this order — and hopefully, it will pave the way for bigger steps toward full equality for gay, lesbian, and transgender workers in the country.