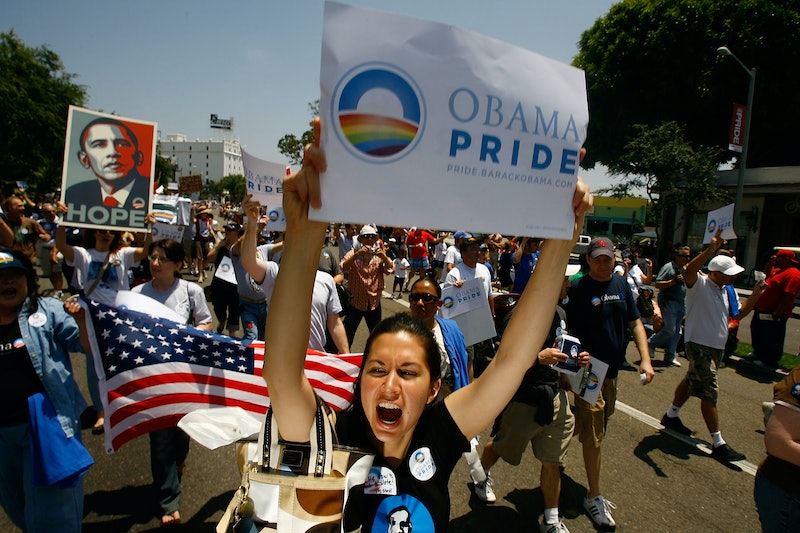 Perhaps because June is Pride Month, President Obama has been rolling out tons of pro-LGBT policies left and right over the last couple of weeks. He’s extended workplace protections to LGBT employees of federal agencies, made federal workers eligible for paid leave to care for same-sex partners, and ended Medicare’s ban on gender reassignment surgery coverage. Considering LGBT activists’ initial disappointment with Obama — who originally didn’t even support marriage equality — this appears to be progress.

But how much progress is it? When, decades down the line, historians assess Obama’s record on civil rights, what will his legacy with regard to LGBT issues be? It’s impossible to say, but as of now, it seems pretty safe to guess that he’ll be regarded as the most pro-LGBT president so far. That isn’t to say everything is finally fair, or that the president hasn’t made some missteps. He has. But on the whole, Obama has given LGBT Americans a lot to be happy about.

It’s worth looking both at administration’s successes — as well as its failures — on gay and gender rights. Let's take stock.

It’s easy to forget that as of a mere four years ago, LGBT Americans weren’t allowed to serve openly in the military. Obama pushed hard to repeal this policy, and almost failed — but in 2010, during Democrats’ last month of control of the House of Representatives, Congress finally passed the repeal.

On Friday, the U.S. Office of Personnel dropped an antiquated policy that prohibited insurance companies from offering gender transition-related health coverage to federal employees. As such, insurance companies will now be allowed to offer such coverage for trans federal workers — although they will not be required to do so.

Dropping the legal defense for the Defense of Marriage Act

Before the Supreme Court ruled that DOMA, which prohibited same-sex couples from getting married, was unconstitutional, Obama’s Justice Department announced that it would stop defending DOMA in court. Admittedly, this took longer than it should have — up until February 2011, the administration was defending it. (But we'll get to that in a minute.)

Through various executive orders and directives, Obama has significantly expanded the rights of LGBT employees of the federal government. This includes offering health and life insurance to same-sex spouses of federal employees; banning federal contractors from discriminating based on sexual orientation or gender identity; directing the IRS to recognize same-sex marriages for tax purposes; and, as of Friday, allowing federal employees to take work leave to care for same-sex spouses.

Eliminating funding for schools that engage in transgender discrimination

Ever since 1972, public schools that discriminated “on the basis of sex” were stripped of federal funding. In 2014, the Department of Education clarified (or expanded) the law to ban gender-identity based discrimination as well, which goes a long way to addressing the very real problem of transphobic discrimination in schools.

At the end of May, the Department of Health and Human Services finally ended Medicare’s 33-year ban on coverage for gender transition surgery and related care. While Medicare is only available for people 65 and older, private insurers often take cues from the federal agency in setting their own coverage policies, so the decision could have a ripple effect throughout the insurance industry.

In 2010, the Justice Department ordered federal prosecutors to enforce provisions of the Violence Against Women Act, specifically those surrounding domestic violence accusations, in cases involving same-sex couples. The new regulations apply regardless of the victim’s gender, meaning that men in same-sex relationships qualify for protections under the Violence Against Women Act.

For the first two years of Obama’s presidency, the Justice Department fought against same-sex couples who applied for federal marriage benefits in court, citing the Defense of Marriage Act. Obama said he favored a legislative repeal of DOMA, but eventually reversed course and simply stopped defending the law in court. This led a lot of LGBT activists to ask a question that’s been asked many times with regard to Obama’s record on gay rights: What took him so long?

Failing to lift the military ban on transgender troops

For decades, trans Americans haven’t been allowed to serve in the military. The Obama administration can reverse this policy, and according to a panel headed by a former U.S. Surgeon General, there’s “no compelling reason” not to. But even though the Defense Secretary supports reviewing the ban, the ban itself is still in place.

If Obama gets credit for ending DADT — which was accomplished by Congress, not him — he also has to take blame for failing to pass the Employee Non-Discrimination Act, which would prohibit LGBT discrimination amongst private employers. Obama has always supported ENDA, but he only started pushing hard for it after Democrats lost control of the House of Representatives — and the GOP-controlled House is now the only thing preventing from ENDA becoming law.

It's unclear if Obama is waiting to roll out any other pro-LGBT policies until his last year in office. If so, those policies could lifting the Pentagon's ban on transgender troops and requiring, rather than simply allowing, insurance companies to offer gender reassignment coverage to federal employees and Medicare recipients. Another concerted push for the House to pass ENDA couldn't hurt, either. Whether he moves more quickly than in his first term, we'll just have to wait and see.

More like this
Jujubee’s Humble Reminder
By Sam Ramsden
Megan Barton-Hanson On Bi-Visibility & The Need For LGBTQ+ Love Island
By Sam Ramsden
It Took Me 13 Years To Come Out – Here's What I Learnt Along The Way
By Rose Frimpong
17 Powerful Photos From March For Our Lives Protests Across The U.S.
By Michelle Toglia
Get Even More From Bustle — Sign Up For The Newsletter