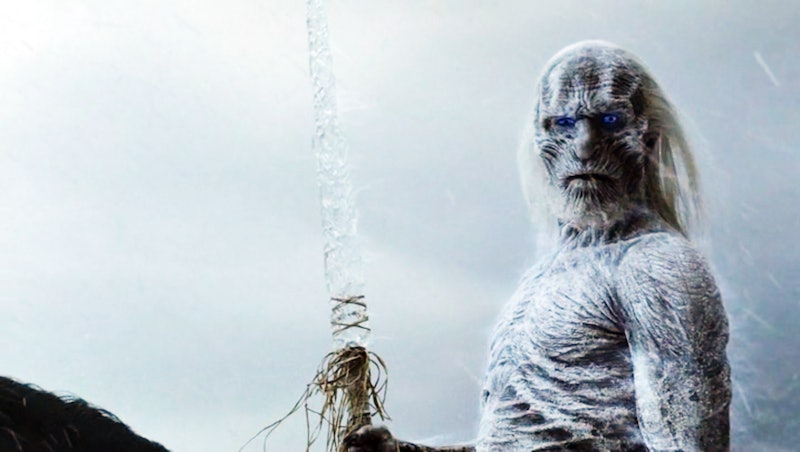 Several literal winters have come and gone, and the White Walkers have yet to arrive on HBO’s Game of Thrones . Up until now, the Others have mostly been consigned to a small snapshot at the end of each season. But with the appearance of what is assumed to be their leader in the episode “Oathkeeper,” we're really hoping those pesky White Walkers are finally ready to show their faces — or whatever is that they call the fronts of their heads.

While the War of the Five Kings rages on, the infighting has quieted considerably with most licking their wounds instead of plotting out their revenge with the exception of Littlefinger who is giving off a distinct Frank Underwood vibe. It’s the perfect timing for the overall theme of good vs. evil to plot out its course — and it’ll take center stage in the battle between Lord of Light, who is worshipped by Melisandre and The Lord of Darkness, who is considered the father of the White Walkers.

In A Song of Ice and Fire, the Others are mostly spoken about as mythical characters believed to have lived long ago and now long dead. They were thought to be nothing more than the stuff of legend to scare little children, and are painted as mindless monsters that came to destroy everything and everyone in their path with their thin swords made of ice. So some of what has been revealed about them is new material featured on the show only. Still, the timing of their return is hidden in their history told through folklore in the novel. Here are a few signs that point to the groundwork having been laid for them to arrive in force in the sixth season:

A Dummy's Guide to Killing a Wight

Way back in the first season, the sometimes clueless Jon Snow wasn’t initially all that excited about life at the Wall after learning of the state of the Guard. But early on it proved fruitful; he learned how to get rid of wights, the undead who do the Walker’s bidding, when he and others brought in the bodies of two rangers assigned to his uncle Benjen Stark. Knowing that fire is their kryptonite will help the Night’s Guard as they prepare of the war.

The Gift From Season 2

Samwell Tarly and other members of the Night’s Watch stumbled across a satchel of daggers made of dragonglass in the second season. The discovery led the way to Samwell discovering that the weapon could be used to kill White Walkers, who previously had shown themselves invulnerable to regular swords. This provides a way for the people to defeat the coming army without having to go through the entire backstory of the First Men and how they overcame the White Walkers centuries ago, even though skeletons of the story can be picked up through conversations between various characters.

Did We Meet the Night’s King?

By far the most concrete sign we’ve received to suggest that the Walkers will arrive soon is a brief clip showing us the Night’s King and his ability to seemingly turn living baby boys into Walkers. This suggests that the King has been using Craster’s sons to create an army of his own in order to storm the Wall and once again plummet the continent of Westeros into a dark cold winter. Clearly an uprising is afoot.

The Timing is Right

Author George R. R. Martin’s forthcoming sixth installment in the A Song of Ice and Fire series, The Winds of Winter, will reportedly delve into the White Walkers a little more and finally bring the war between R’hllor and the Great Other to the forefront. Plus, we are on schedule to cover both A Feast for Crows and A Dance with Dragons in Game of Thrones' fifth season, which would make since, due to the events occurring simultaneously. That leaves the sixth season to wrap up any lingering plotlines and The Winds of Winter.

I’m not inclined to trust Melisandre, but I’m also not willing to discount any woman that can push full grown ghost assassins out of her vagina. The R’hllor priestess and advisor to Stannis seems more aware of the very real threat the Great Other opposes than most. With Stannis’ renewed interest in capturing the throne, we are in place for him to be diverted and drawn to the Wall, just as in the books. From there, the preparation for the upcoming war takes hold.

We’ve been waiting this long for the Others, surely another season of political drama won’t be insufferable, right? The fourth season of HBO’s Game of Thrones will wrap up on June 15.